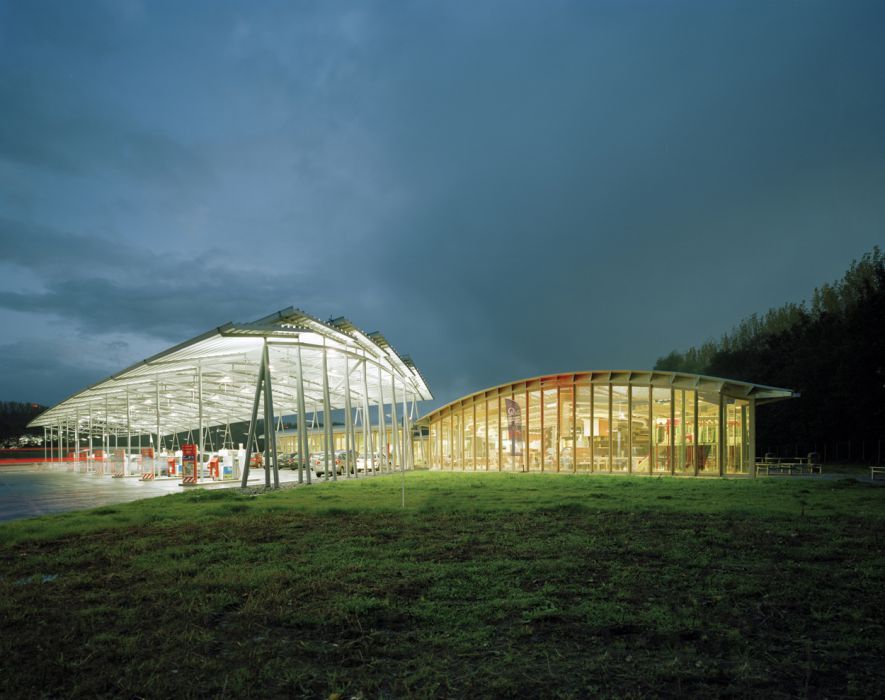 The service stations at Ruisbroeck are located on one side and the other of the Brussels-Paris highway on a flat, open and narrow piece of land situated in the wooded valley of the Senne.

The first version of the project is sited so as to be a major signal in the surrounding environment while being carefully integrated.

The entrance to Brussels is announced by the monumental facade of the hotel that appears as a single plane of glass reaching skywards.

At night this glass facade is illuminated and becomes a very visible kind of lighthouse. Its integration in the surrounding environment reminds one of the walls of a greenhouse.

To the West, a restaurant is envisaged and will also be accessible from the rest stop area by a bridge that spans the highway.

The hydrogen service station at this rest stop is also an important signal at the entrance to Brussels relating the importance of alternative energy sources.

The rows of trees are arranged at a 45° angle to the highway to provide maximum visibility of the landscape and the service stations from the highway.

A same spatial dynamic and a 45° movement unite poplars, buildings, awnings and the comings and goings from and to the highway.

The awnings over the fuel pumps are aligned from one area to another as well as the rows of poplars.

This continuity provides structure and compositional unity to the totality of the rest area.

These two functions are articulated each time from one end to the other along a 4-m-large passageway that serves as a public gathering place leading to the front entrances (fuel pumps) and back entrances (parking facilities) of the building.

Most of the parking for passenger vehicles and busses are situated close to the building.

Preoccupation with the contextual, landscape and regional integration is present as well as in the choice of specific building materials and artistic elements at the rest area.

Sustainable development receives particular attention in all aspects of the project.

The compactness of the project is an example. It enables the maximization of green spaces while optimizing the services on offer and the commercial dynamic.

Security, service, customer comfort and functionality are permanent preoccupations that guide the meticulous attention in the various choices to be made in the context of this project.

Following a demand by the regional government, the project is modified to emphasize the transparency of the site and diminish the presence of constructions in protected green zones.

The hotel is now implanted as a pavilion in a park and has a completely autonomous function. It is protected from the highway by an embankment that provides acoustic and visual isolation.

It comprises a ground level and only one upper floor and is more discretely integrated in the landscape.

Its implantation is along a 45° angle in harmony with the rest of the site.

The hotel is organized around a longitudinal atrium that is prolonged to the exterior by ivy-covered trellising.

This element of vegetation integrates the hotel in its densely green and vegetated environment.

The modified project maintains the commercial dynamic of the site thanks to the ease of circulation between different services for both automobile and pedestrian traffic.

The hydrogen service station is now positioned between the fuel pumps for passenger traffic and heavy truck traffic.

The new arrangement of the shop in the zone to the East provides a clear view of the Senne valley.

The play areas and picnic areas are protected from the highway by the shop.

The implantation of the two service stations and the trees at a 45° angle to the highway is maintained.

The rows of poplars are replaced by less dense rows of oaks to augment the transparency of the site.

Along the sides of the rest area, denser zones of linden and hornbeam are planned.

At the request of the regional government, the trees on the central berm are abandoned and the parking areas for heavy trucks are brought closer in order to allow reinforced control in that area.

The bus parking area of the rest stop to the West is closer to the shops to enhance accessibility. In this same area, some parking spaces were eliminated in favor of play and picnic areas.