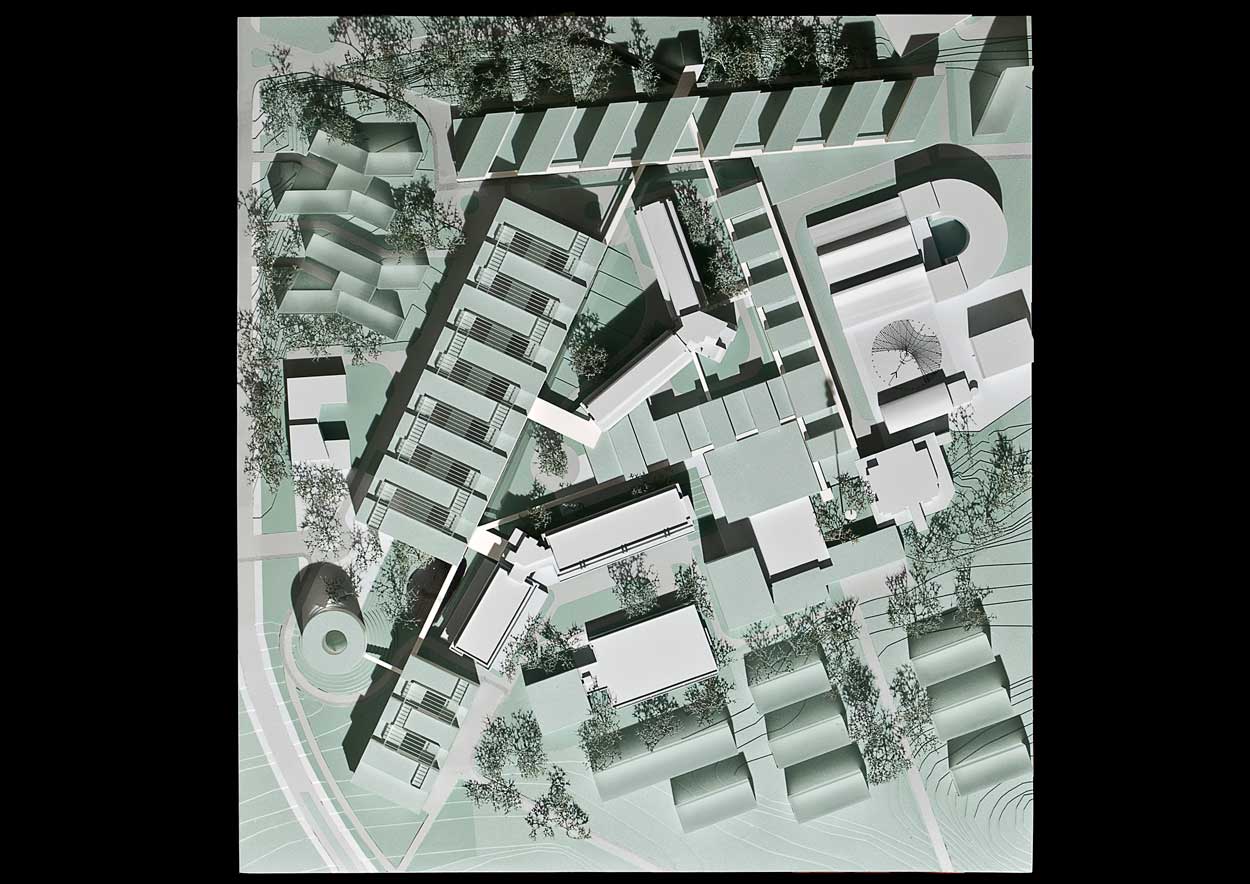 The ULB (Free University of Brussels – French-speaking section) wants eventually to bring together on the campus of la Plaine all the faculties that could have a part to play in setting up a science and technology centre of international renown.

The overall building plan seeks to optimise the energy and environmental criteria with a view to establishing a new rational and unified layout on the site.
In function of the programme imposed, on a site covering a surface area of 9.7 ha, the new overall building plan stakes out 101 000 sqm of new built-up areas, maintains 54 000 sqm of existing built-up areas and pulls down 8 440 sqm of buildings

The new buildings are set on a base containing a naturally lit and ventilated parking on three levels. They are built according to the cardinal axes and are oriented optimally according to their functions.

The residential blocks are set out on an east-west axis at the edge of the VUB (Free University of Brussels – Dutch-speaking section) site. This is an ideal orientation for housing and also means these blocks are not directly facing the buildings used for teaching and instruction.

The offices and laboratories of the buildings for Applied Sciences, Earth Sciences, Biology, and Chemistry extensions are for the most part afforded a north-south orientation, with a view to optimising solar protection and solar gains.

For reasons of constructive rationality and composition, the new buildings arranged around the “Forum” are aligned along the latter’s orthogonal axes.
The extension of the Chemistry Department’s building A also respects the axes of the building against which it is built.

The relatively low height of the new buildings (two storeys to six storeys) means that the existing buildings N-O and B-C remain the highest buildings on the campus, in line with the initial principle of the la Plaine urban planning policy.

Existing or stand-alone small buildings are dealt with in such a way as to open up the site as much as possible towards the city. The T and Ch wings are incorporated in the car parks occupying the base of the residential blocks, and the P00, H and M wings are pulled down (their functions being rehoused).

The road linking the ULB’s two campuses (Solbosch and la Plaine) is dealt with naturally as the main access way leading to and providing a view of the la Plaine site. At the end of this road, a square-cum-park welcomes pedestrians to the campus. This is the most symbolic and most visible place on the site; it amply opens up the campus towards the Boulevard de la Plaine and the Boulevard du Triomphe, as though extending an invitation to the general public in the city. Access to this square is mainly reserved for pedestrians, cyclists and public transport. Vehicle access (other than public transport) is diverted further to the north.
The building housing the new library is built very specifically as if to act as a seminal structure on the square-cum-park, like the Centre d’Action Laïque (CAL), an existing stand-alone building occupying a very symbolic position at the entrance to the site.

The square-cum-park extends alongside various campus buildings like a network of green that links in with and fits into the green spaces of adjacent plots.

Before the abandonment of this master plan (in February 2020), two “vertical village” projects are studied, aiming at densifying the city and the site, while increasing its botanical space.

The first one (01/656-1) concerns a porous structure of 80 levels proposed along Boulevard de la Plaine to the West of the site.

The second (01/656-2) concerns two slender, 36-level, elliptical towers intended for housing, located along Boulevard du Triomphe to the East of the former site of Plaine des Manoeuvres, next to the project of the small fire station (see 01/654).