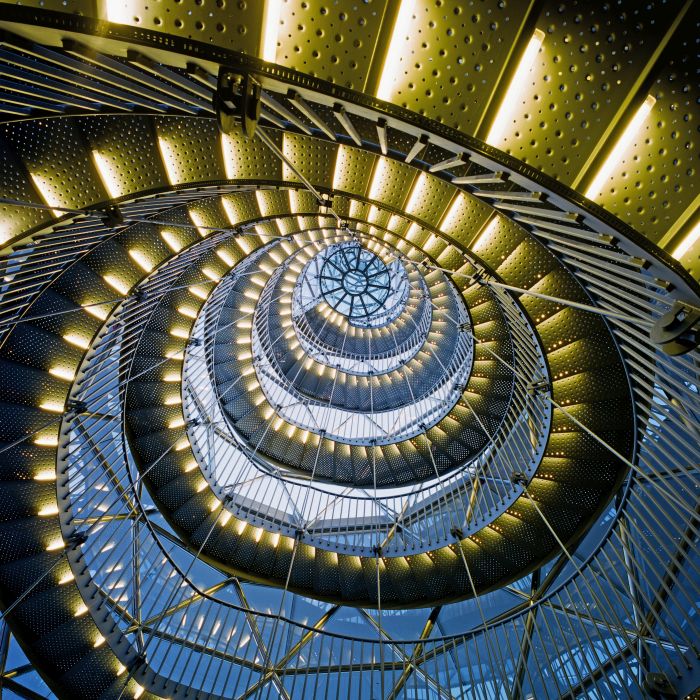 The Glass Centre, Flemish Centre for Modern Art, has been constructed along the length of the “De Vryheyt” passage, right in the heart of the town of Lommel. On “Dorp” square it completes the cultural ensemble formed by the Aerts house and the regional tourist centre. In the “De Vryheyt” passage, a new glass gallery links “Dorp” square with the “De Adelberg” cultural centre and its future theatre.

The nature of the project required us to design a glass building, and it has been designed in such a way that the space it provides blends in seamlessly with the art it displays and produces, forming a unified whole. Furthermore, the structure emphasises the Glass Centre’s multifunctionality (education, information, services, exhibitions and glass production). The building’s architecture adapts to this multifunctionality, using glass in varied and innovative ways.  The Glass Centre is composed of two interconnected glass areas that interact with each other: first, there is a parallelepiped composed of a stainless steel frame covered with an ultra-clear glass curtain wall; second, there is a glass cone made up of triangles, which clearly identifies the building as the Glass Centre. The roof is considered to be the fifth facade and will receive a special treatment in the future.

The range of colours used for the finished interior decor includes only white, black and a range of pure greys, composed exclusively of white and black pigments. The result is a neutral canvass that maximises the impact of the art works and their colours. In practice, we have retained white and two shades of grey with 35 and 45 percent black.

From the outset, the building’s sustainability was considered to be an essential element of the project, both by the owner and by the architect. Heat from the kilns is therefore collected and used to heat the building and rainwater is used for the glass production work.

The lower level, which benefits from little natural light, is particularly well adapted to exhibiting art works made from glass. The exhibition area has a direct link to the workshop: it is separated only by large glass panels, enabling visitors to follow the manufacturing process whilst remaining at a safe distance.

A semi-closed mezzanine offers an enticing view of the cone and the exhibition area on street level.

The glass cone, which is 8 m in diameter, reaches a height of 30 m, dominating the other buildings in the town centre. It is clearly visible from all directions, but it is not an imposing presence in the urban landscape thanks to its filigree structure and the ultra-clear covering that makes it almost transparent. At night, however the cone stands out as a real landmark thanks to a sea of electroluminescent diodes, as well as its illuminated point. Its point, which is made of perforated steel plate, is lit from the inside by a projector that shines upwards. The electroluminescent diodes that light up the structure in varying patterns are attached to the joints of the frames. They snake around the walls and come to a point at the top, constantly changing the building’s visual impact.

Above street level, the cone is composed of a unique system whereby the frames themselves make up the many-sided structure, with no other support. The system is 6 cm thick at most and is composed of triangular frames made of hollow steel tubes and to which two stainless steel frames are snap-fitted. The result is a system without joints.

In the lower level, the metal structure and the bent glass covering are separated so that two curved glass sliding doors can be included, leading to and from the cone.

Inside the cone, two identical steel staircases are suspended from the structure and spiral upwards. Ascending the stairs, visitors pass the three exhibition areas, gaining an overview of the entire building. Interior mirrors have been positioned at ceiling height in the parallelepiped and display an unusual series of reflections of the structure.  Even though visitors may be inside, these mirrors enable them to view the entire structure of the outside of the cone by day, and a shimmering light display by night.

Once visitors have reached the roof of the parallelepiped, they can climb another 15 m up inside the cone to a glass platform formed where the two spiral staircases meet. From here there are suburb views over the surrounding area.

The platform is made of clear glass in order to preserve the magnificent perspective that you get up through the cone from the basement, including the stairs that seem to climb up to infinity.