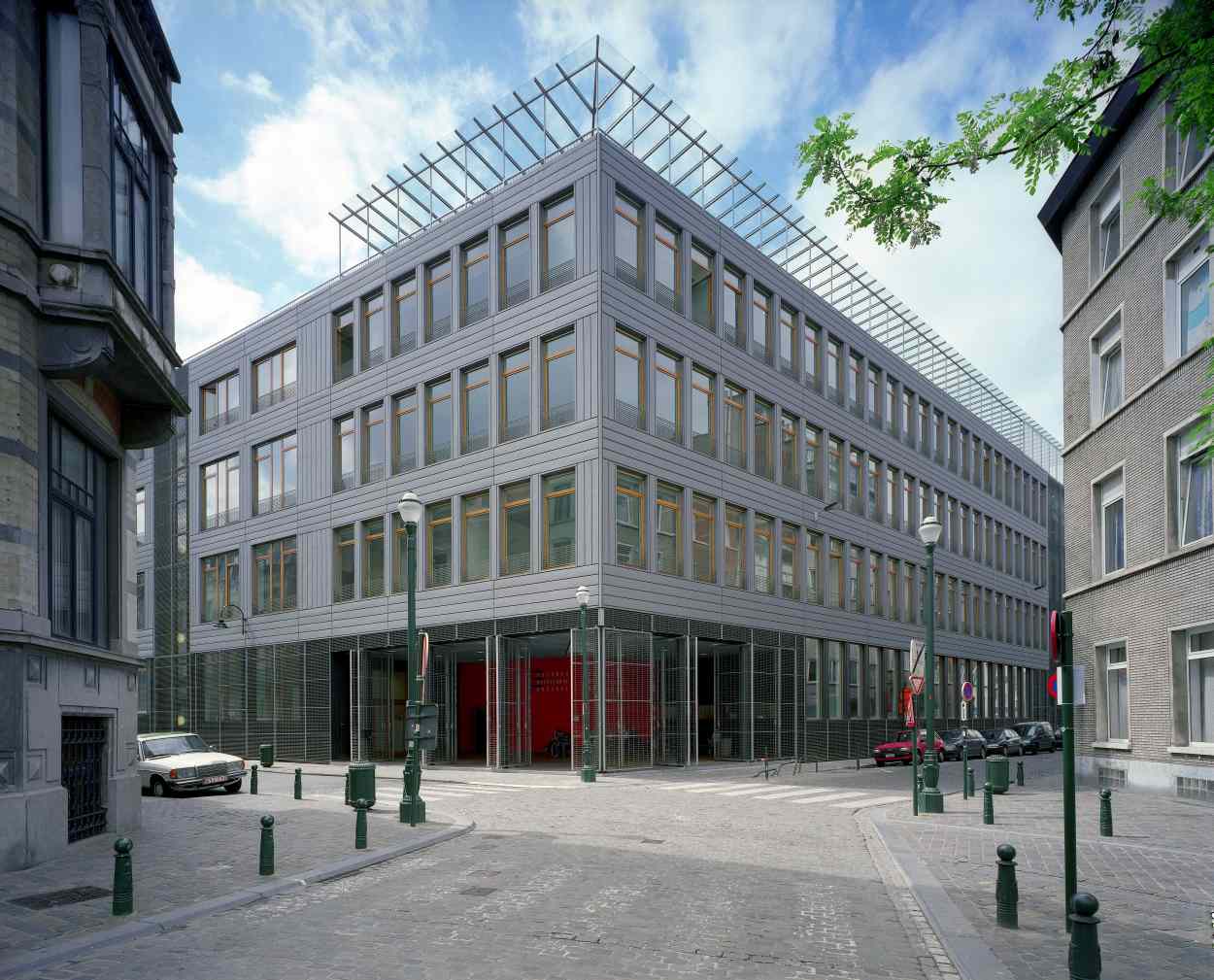 The former DISCCA hospital dates from the 1950’s and is remodeled to welcome the 1,200 students enrolled at Erasmus College.

The school wishes to integrate with the historical fabric of Brussels and regroup three diverse departments that are currently located in less central locations (communication, social & educational sciences, and hotel &  tourism)

The renovation aims to make the existing irregular building into a homegenous entity in close dialogue with the urban environment : the lobby at the entrance to the new school opens generously onto the small public place ; a large awning crowns the building and protects the terrace of the rooftop panoramic restaurant, which replaces former technical structures.

The zinc cladding that covers the facade give a contemporary feel to the building and literally make it shine in the sunlight while at the same time reducing energy consumption. The deep-set window wells protect the wooden window frames. At the street level, pierced latticework panels in galvanized steel protect the facade from vandalism. They also allow the large windows to open the visual space onto the street while protecting the view into the building  from the street and passersby. At the entrance, these same latticework panels are fixed to movable frames that can be opened or closed depending on the time of day or any potential risk from the street activity.

The annexes situated in the interior of the islet are replaced by a garden situated below the level of the buildings in order to allow light to stream in at every level : discrete bridges traverse the garden and connect to various emergency exits.

Inside the building, the existing structures and walls are conserved insofar as is possible, while reducing demolition work to a strict minimum. The existing floor and wall finishes are also conserved when possible and integrated with the new surface treatments that will be carried out by artists.

Two principal locations are treated with special attention : the library situated at the lower level, and the large study hall situated at street level combines in the same volume that is double the height of the other floors. They are  in direct contact with the vegetation of the interior garden so as to enhance an atmosphere of calm, inspiration and harmony favorable to concentration. In contrast, the cafeteria, situated on the rooftop looks out on the hub and flow of the urban activity below. It’s an area of free social interactivity that opens onto a large wooden terrace. A glass awning provides protection from rain and sun, while crowning the facade itself.

The stairwells are modified to conform to current regulations :

Each of the three principal stairways lead to exterior alleyways that intersect and allow the students to reach the garden directly from every level of the building.

The enclosure wall in the interior garden can be covered with temporary murals renewed every three to six years in symbiosis with the dynamic life of the Erasmus College.