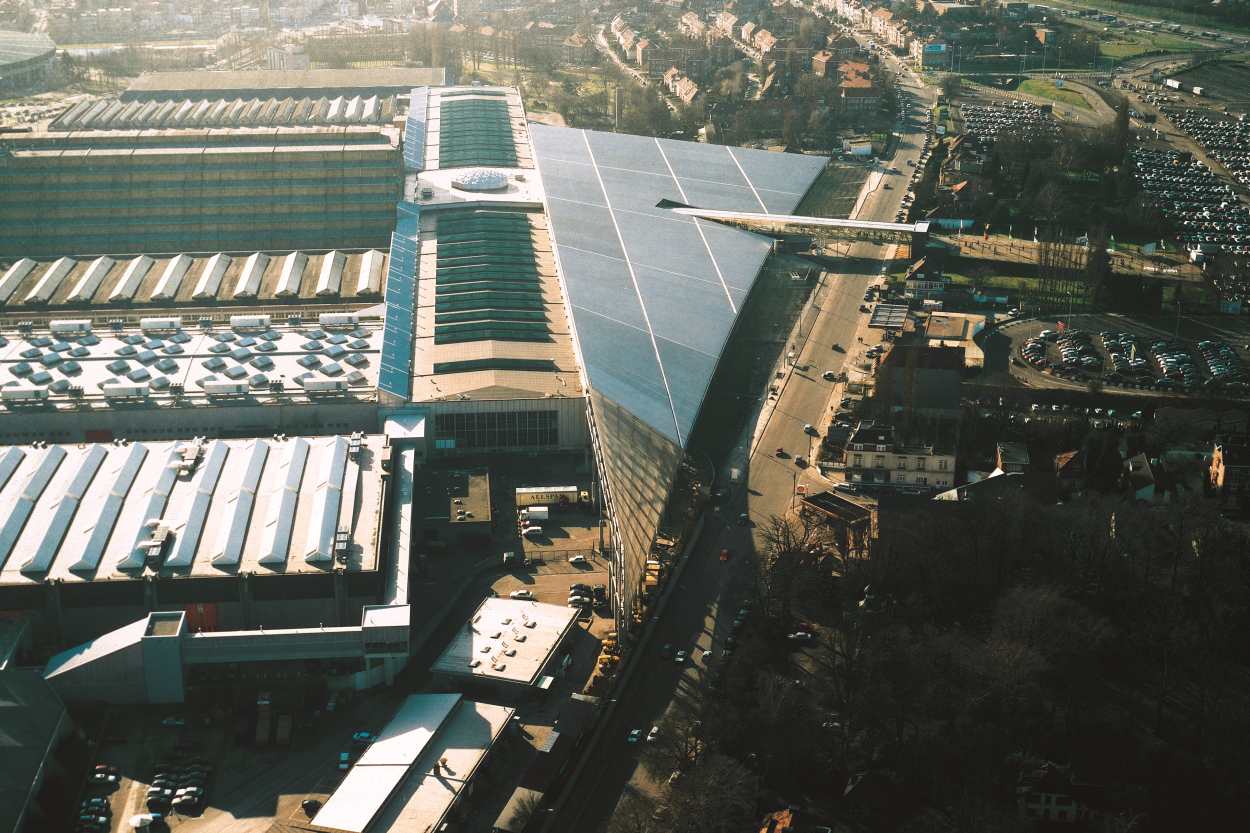 Pedestrian bridge and the foyer

Destined for large crowds, i.e. for the public in the real physical sense of the word, a venue such as the Brussels Exhibition Centre requires a reception area as well as exhibition spaces.

During the 1935 Exposition, the public approached the fair grounds from the city centre and was greeted by the colonnades and pools of Place de Belgique as well as the long perspective of the Boulevard du Centenaire.

But already during the Universal Exposition of 1958, road transportation had developed considerably and a great number of visitors arrived by car, parking in the huge facilities provided in the back, or by busses dropping them off on the esplanade along the Chaussée Romaine. Visitors were thus entering into the halls by the Patio, a vast open cover designed for vehicular circulation.
This inversion in direction of the flow of visitors entering the complex has not stopped from asserting itself as time progressed and the resulting duality disturbs the smooth running of the exhibition halls themselves.

Certain figures give an idea of the extent of the flux which goes through the northern gate (“Porte Nord”). The parking site at the rear contains 12,000 parking spaces and up to 70% of the visitors enter the halls by this side which represents more than one million visitors per year in addition to lorry and van traffic, for an exhibition area of approximately 140,000 m˛. It is clear that the pressing need for a large scale reception infrastructure has become urgent in order to deal with the concentrated and massive stream of visitors entering from the northern end, much as a water tank receives the downpour of a summer thunderstorm, whereas the drizzle of visitors using public transport continues to trickle into the gentle environment on the southern side.

This evolution is similar to the one undergone by other European exhibition centres. After having given the priority to the necessary growth of show spaces, they are now equipping themselves with vast welcoming zones built with expressive structures and at times, as in Leipzig, with impressive spans.

The foyer of the Brussels Exhibition Centre is mainly constituted of a vast hyperbolic paraboloidal roof surface made out of natural coloured aluminium, on a structure made of wooden beams resting on concrete columns. It covers, in the long run, a total area of 26,000 m˛ on a 15.00 x 16.20 m grid.

A 10 metre wide and 86 metre long pedestrian bridge (built in three sections) spans the Chaussée Romaine so as to connect directly the Parking C with the welcome area as such. Located underneath the aluminium roof and at 6 metres above ground level, it covers the goods vehicles area serving the halls.

Acting literally as a hub, it also gives access to a network of walkways tucked in between the existing halls, at 6 metres above ground level, allowing the public to have direct access to each hall separately.

Vertical circulation cores equipped with escalators and stairways link the level of this “spine” with those of the exhibition halls. The configuration of the infrastructure is intended to be flexible, capable of catering adequately to the most varied present and future needs of numerous formal and informal events which take place in the exhibition halls.

A wide variety of functions are installed on the upper level of the reception area which in its first phase, affords a 29.019 sqm. area.
At the present stage of the project, other than ticketing and access control, common service facilities are provided such as : cloakrooms, information centre, booking, interactive information display panels, etc., which are laid out according to the specific prerequisites of each event. The sloping aluminium roof encloses also a restaurant spread out on two stepped-back floor levels so as to be accessible by the visitors from the reception level as well as by the street side residents along the Chaussée Romaine. Parking facilities are provided for the exhibitors and additional assorted autonomous functions can be considered in the long run (business centre, post office, press centre, winter garden, children’s playground, etc.) to enhance the liveliness of this Foyer.