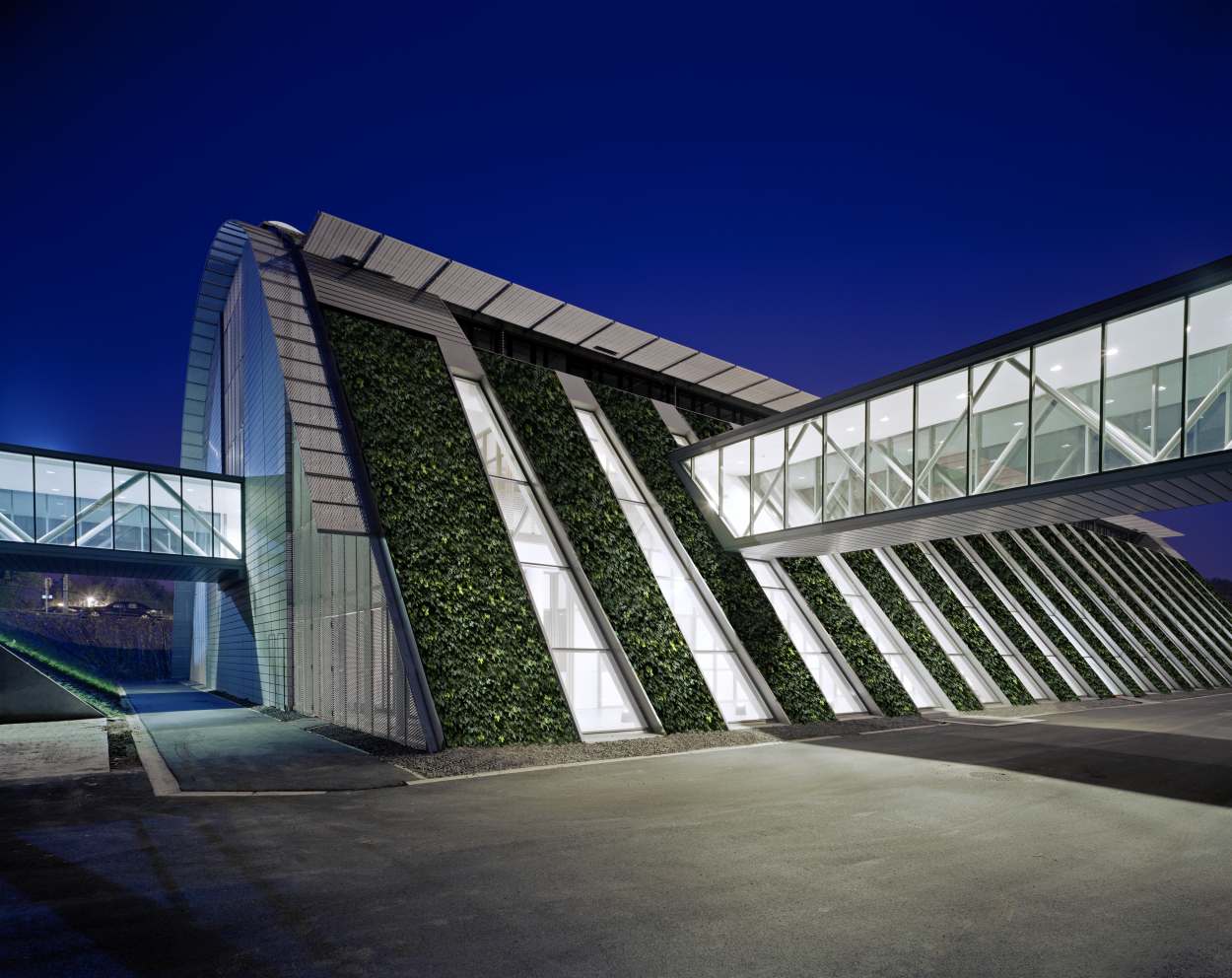 The first phase follows a study done for a master plan of the entire university hospital site. The most urgent issues in this study pertain to creating additional areas in order to free the zones to be reorganized plus the car park lay-out.

This project constitutes the first phase of a project for the entirety and targets relieving congestion in the existing buildings to permit reorganization of the various wards in successive stages.

The volumetry of the building is the result of a fairly long study, given its location across from an imposing nine storey building. Several options were envisaged, including creating two underground storeys. This solution would have the advantage of preserving the area available for construction, a rare resource of great value both for the hospital and for the city.

For both technical reasons (debris, pumping waste water) and psychological reasons (underground working stations with no daylight), the solution of putting the laboratories underground, even on a single level, was rejected. The proposed structure combines the advantages of an underground building and those of a building above ground. The shape of the building appears as a mound on the lot extending the natural relief of the grounds. This mound will be extended in the future in the roofs of the car parks. The long elevation’s cladding is made of a water-retaining layer and volcanic soil, on which ivy and crawling plants are growing. This makes it possible to blend the building within its surroundings without concealing the existing buildings.

The hospital’s view of Brussels is thus maintained and the 5th facade-the roof covered in greenery, is also more attractive than a traditional flat roof.

The shape of the building was also chosen with reference to the programme. The narrower levels at the top are used for offices, whereas the large, multifunctional, flexible lower levels house the laboratories.

These medical laboratories operate on a split level; peripheral halls, whose height extends over the two levels, circle the laboratory areas and the technicians’ offices. The hall area acts as a thermal buffer, in addition to the thick landscaped facade, and as a relaxation area since the relation between the two floors is favoured by their height. The hygiene regulations for the laboratories do not apply to the lay-out of the hall, so that light-coloured wood panelling could be used on the walls. The laboratories are separated from this hall by window walls-this transparency prevents the hall from being used as inappropriate, unofficial storage space. The habitual hospital/laboratory scheme gains a friendlier atmosphere, that is propitious to daily work and stimulates exchanges between colleagues.

In the long term, the extensions shown in the block plan will definitely be carried out: expanding either the outpatient service or the new building will be possible by branching off to the car parks or simply by demolishing an adjacent building belonging to the Red Cross.

A future connection with the building for outpatient services will provide a simpler, covered link to the main entrance. In addition, already at this stage, an overhang could be erected at the juncture between the end wall on the north and the building holding the main entrance to provide a comfortable, relaxing area for smokers that is more appropriate than the entrance to the hospital.

The vertical traffic areas are laid out to create large, flexible, modular zones while respecting the future extensions. They will be located on the north and south gable walls and, like the peripheral hallways where there is considerable traffic, they will enjoy the advantage of natural lighting. The southern and northern facades are equipped with expanded metal screens in order to filter the light and to avoid strong overheating.

A number of high apertures let daylight penetrate deep into the laboratories. On the other hand, the offices on the upper floor have long horizontal bays with panoramic views. A broad terrace runs along the windows.