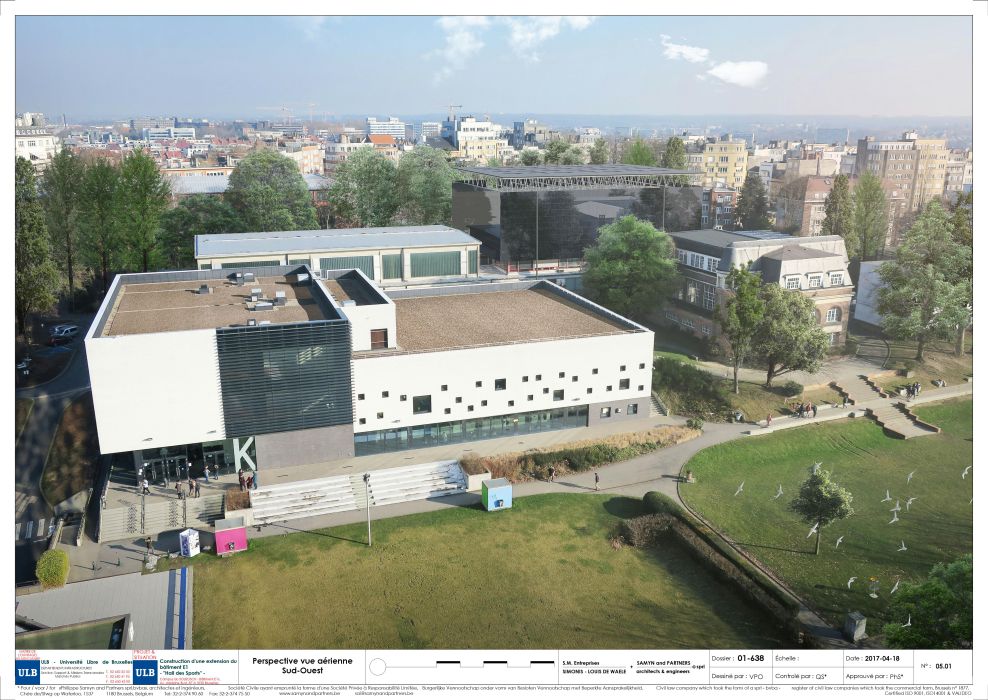 Several items argue against the layout planned by the University administration for the extension of the sports hall (E1x), located north-west of the existing E1 building:

– the site features outstanding forestry assets, including one beech tree and two chestnut tree more than 50 years old. The existing E1 building (physical education) is bordered on its north-west and north-east sides by magnificent beeches. The northeast facade and surrounding beeches form a particularly harmonious combination;

– the E1 building is a distinctly elegant reminder of 1960s architecture and well worth preserving. It was produced by the architect Robert Puttemans in 1968 (ref. : « Université Libre de Bruxelles, le Campus du Solbasch – Inventaire du Patrimoine architectural, Bruxelles – Extension-sud », 30 p., www.irismonument.be). The building is also quite remarkable owing to the restraint shown in the materials chosen, thereby guaranteeing its longevity. Especially noteworthy is the perfect condition of the pinewoood frames, unlike the poor condition of the aluminium joinery for the Physics Institute, avenue Depage;

– vacant land on the site is receding in line with the ULB’s development and is becoming increasingly precious;

– it is  at this spot, where it was planned to be located,  that the E1X building would cast its shadow on the campus entrance, close by.

The analysis of the “Genius Loci” suggests the need for an alternative layout for the new sports hall on the south-east section of the E1 building roof. This layout would save on the amount of building land required, would safeguard the existing biodiversity, would not cast a shadow over the campus’ key functions and would pay respect to the magnificent north facade of the E1 building, as well as its avenue Jeanne neighbours. It would also provide a means of creating an energy-plus building through having solar panels placed on the roof and facades. This would be out of the question if the original layout were to be used, owing to the trees nearby.

Integration into the urban environment and architectural identity

The sections show that the new E1X sports hall has a weak impact on the urban setting and on the campus. The extension fits into the pyramid building outline that the existing building is developing between avenue Buyl and the ULB’s main parking area, thereby limiting any negative effects on the present urban setting in terms of the shadows cast or its visibility.

The extension of the E1 building via the new E1x sports hall, in the form of a multi-reflection black parallelepiped, is a welcome signal to highlight a sports centre being available on the campus.

The four facades are covered by photovoltaic panels. On the roof, an “umbrella” of solar panels is laid on the reversed and external load-bearing structure of the new hall.

These items provide the building with a strong, environmentally friendly identity focused on renewable energy technology.

To the south-west of the building is a new vertical circulation core comprising a stairway and a lift and providing access to the sports hall from the E1. The core is located outside but is protected from bad weather thanks to the perforated steel and glass sheeting. Also serving the E1 building, the area also anticipates the future renovation work required to allow easy access for people with reduced mobility and upgrade the emergency staircase.

The two new staircases make it possible to create separate entrance and exit channels for the hall by avoiding any criss-crossing between sports people and visitors or between school groups.

On every floor, the wide E1 corridors, which are illuminated by the glassed transom in the walls located alongside, continue to act as meeting and living spaces in the new extended sports complex. The current entrance hall on floor 2 has its main entrance role reinforced for all the sports halls and changing rooms.

Quality of the natural lighting

The hall’s natural lighting is provided by twenty-eight 180 cm x 180 cm skylights placed between the main and secondary beams. White, varnished metal grating is installed just under the skylights to reduce any dazzling and backlighting making it more difficult to watch a sporting activity.

Unlike the outside sheeting, the inside of the sports hall is all white (walls, ceilings, structure) and is a good reflector of light, whether it be natural or artificial.

Outside heating periods, the double flow mechanical ventilation system is replaced by naturally occurring ventilation. This aeration is provided, at the bottom, by outside grids installed under the E1X hall capacity overlap, at the top, by the smoke outlets. This guarantees a summer comfort without overheating and excellent air quality.

Most of the building’s components can be dismantled. Research is also being carried out to find second-hand equipment or materials from recycling channels, particularly in the case of the lift, the heating, ventilation and air-conditioning, floor panels,… The risks and rewards of these “reuse alternatives” are split 50/50 between the contracting authority and the undertaking.

The structure of the new building is based on the existing one, whose columns are being reinforced and provided with R60 fire protection.

In order to minimise its own weight, the load-bearing framework of the floor comprises high-resistance steel Warren trusses and IPE 180 columns. The Warren trusses on the roof are placed externally while the built-up roof system is suspended from this.