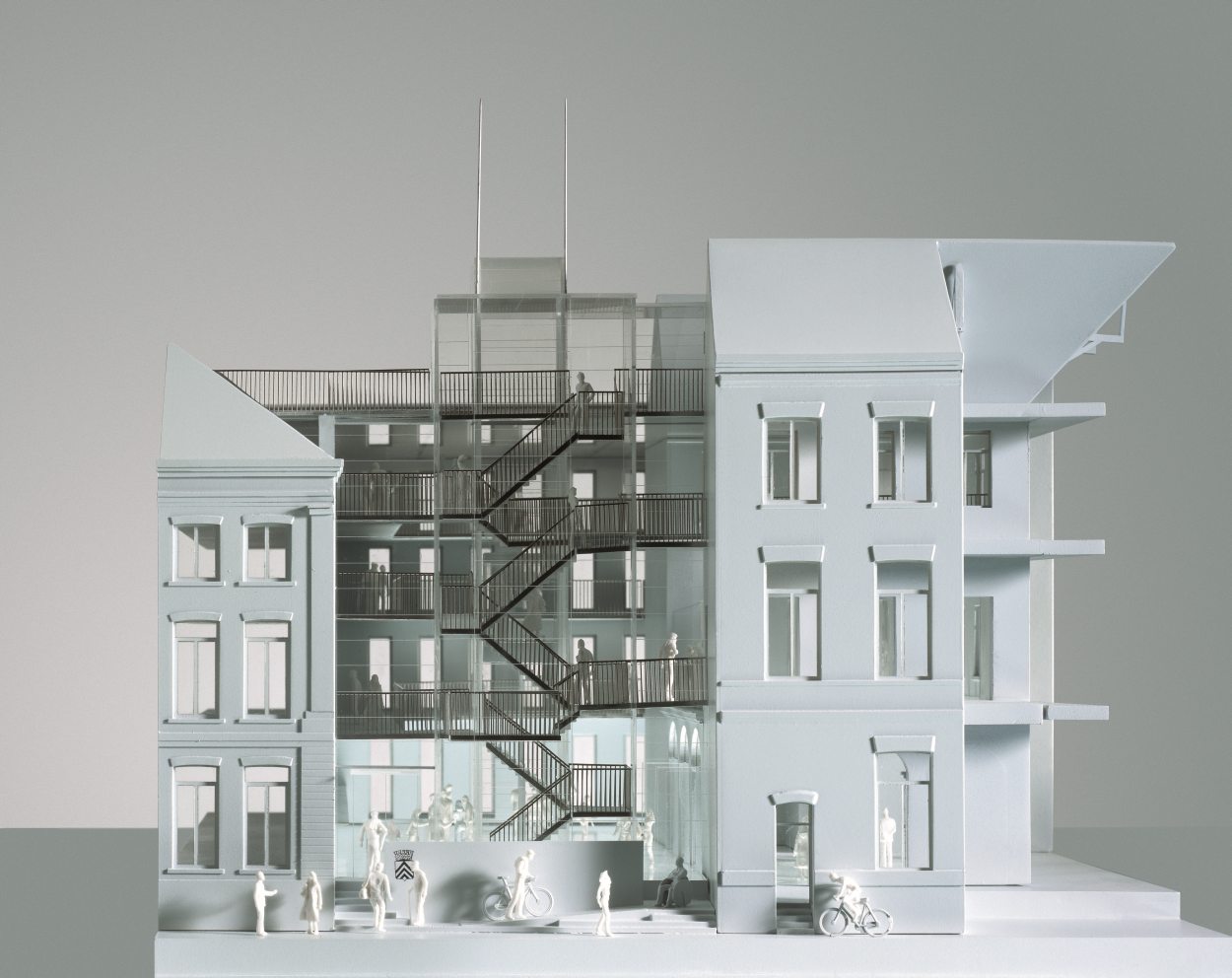 The city hall (18th century, with 19th and 20th century extensions) and the belfry of the city of Menen make up a freestanding block, adjacent to a square on two sides. Because of different adaptations over the years, the building no longer complied with contemporary demands on public buildings.

The design starts from the contact between citizen and council, which often happens through formal channels. The image and the experience one has during this sporadic formal contact are of crucial importance for the perception the citizen has of council-functioning. That is why the architecture of the city hall must have a sense of human warmth and scale, combined with great servitude and transparency. The city hall has to be more than just an administrative centre.

A clear and precise architecture is opted for, one that symbolizes the institutions it represents.

Furthermore, with a warm gesture occupants and visitors are involved in a dialogue with the city.

historical value: gently when 18th century parts are concerned, more drastic for younger wings and annexes. One of the design objectives is to restore the transparency of the original building-configuration, as the readibility of the construction history.

The entire program is on the one hand composed around the glass-covered central courtyard with counters, on the other hand around the circulation spaces. These last ones have a strong connective function and play a strong social part as a meetingplace in the working environment. The hall, basement and circulation areas are conceived as

exposition spaces to further overcome the public’s possible initial hesitation. A 20th century block house is situated underneath the Grote Markt (at the front of the city hall). The underground route between blockhouse and city hall presents itself as a commemoration-loop, recalling the many wars for which Menen and the surrounding area were the scene of action. This way the building acquires an additional museological dimension.

Next to the existing main entrance, the added glazed entrance sets up an open invitation towards the citizens. From here, a smooth distribution of streams of traffic is guaranteed, for wheelchair users as well, naturally. The new entrance represents through its composition the idea of an open house and constitutes a new, clearly readable chapter in the evolution of the city hall. The staircase is completely detached from the rest of the building so the entire space can be worked out as one big light shaft. The existing lift shafts are demolished and replaced by a pano- ramic lift. This lift also takes on the function of central distributor and serves all floors.

428-Renovation and restoration city hall and belfryTuesday, May 20, 2014Filippo Aimo