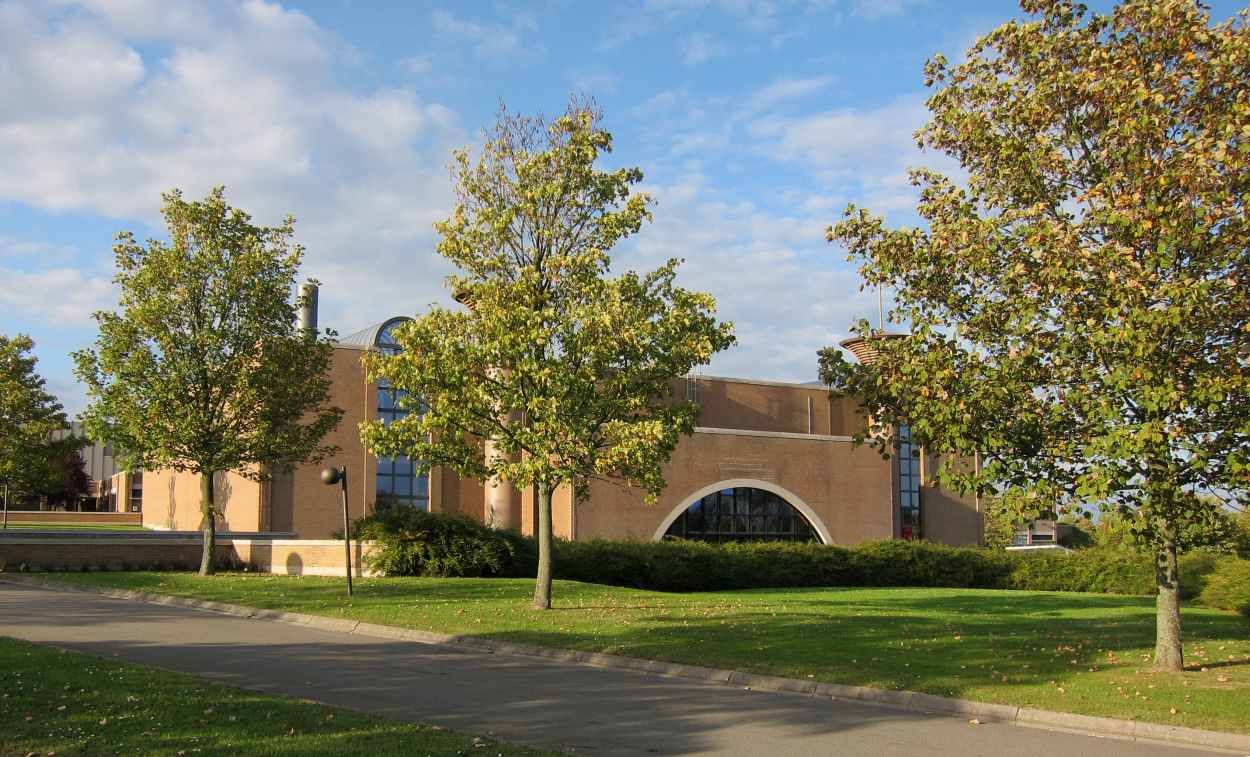 In 1985, Royal Dutch/Shell decides to build a new research centre dedicated to polymer and resin chemistry. After a detailed study throughout Europe, Shell selects a site of about 25 hectares (250.000 sqm) located in the new town of Louvain-La-Neuve.
The site is bordered on the North by a beech forest, on the East by the Brussels-Namur highway, on the South by a secondary road serving the farmers’ fields and on the West by National Road #4.

The site is characterised by a charming valley to the North with a maximum drop of 20 meters, a crest line in the middle of the site at right angles to the highway on the Eastern half and at 45 degrees to the National 4 on the Western half, and, finally, a 12 meter deep depression with gentle slopes to the South-East.

Various technical spaces serve all of the main rooms :
– rooms needed for each group of aboratories serving such purpose as storage and technical space;
– rooms for the production and distribution of energy.

In addition to the foregoing, as is always the case for a research centre, the facility is suitable for a broad range of research uses. This is appropriate because the uses for such centres in the mid- and longterm are often unpredictable. For the same reasons, the dimensions of these kinds of buildings are quite difficult to ascertain as size requirements will essentially depend on the economic fruit of technical or scientific discoveries or client needs. Typically, the decision to build a research centre therefore involves the planning of extensions.

The project goals may thus be summarized as :
1) to design a building that satisfies technical performance requirements in the short – and midterm ;
2) to allow for significant growth of the research carried out in order to avoid future congestion.

The bisecting line of the angle formed by the natural crest of the site forms the major axis of the composition. Two wings of laboratories, offices and halls extend from the main central building to the East and the South-West of the site. A gently curving alley bordered with maple trees links this mains axis to the National Road #4 via a secondary road. The slight gradation of the alley, seven meters over a 180 m distance, extends on a straight line from the site access to the main entrance of the building.

Laboratories are organised in 27 m longs and 10.5 m wide unit, separated by fire staircases. Windows are oriented to the valley and the beech-grove. The laboratories are linked to the main building by an “internal street”.

This street is punctuated on the South side by transversal office wings that are linked to each laboratory unit and to small patio gardens located between them. Transversal corridors linking the offices to the main “street” extend through glass foot-bridges over the technical road and up to the large test halls.

This road forms a large ring around the South side of the office wings and garden patios, the utility buildings on the West side, the South face of the test halls, and eventually the East side of the latter.

Energy and fluids are distributed through a tunnel of 5×5 m extending about 400 m under the North branch of the technical road. This tunnel links each laboratory and test hall to the technical buildings.

Since the drafting of the preliminary sketches, great care has been taken to arrange the distribution of the numerous chimneys and air exhausts. From the beginning, the general strategy for their distribution, agreed upon with the clients, influenced the composition of the chimney height. The original construction included the building of exhausts that were unnecessary to fulfil early requirements. Gradually, this reserve is put to use, allowing considerable internal expansion without damaging the overall concept.

The extensive use of brick and wood-framed windows is a deliberate choice in keeping with the bucolic landscape and the general design philosophy of the new town Louvain-la-Neuve .

As the main pedestrian level extends on a horizontal plane, displaced soil is used to enhance the natural topology of the site. It also allows the realisation of a small 15 m high hill on the Western part of the access alley.

The research centre went into operation on December 18th, 1987 and was subjected to continuous expansion through the end of 1990. The original project layout allows enough flexibility to support these changes. Two additional wings of laboratories and offices as well as a utility building were added in 1992.