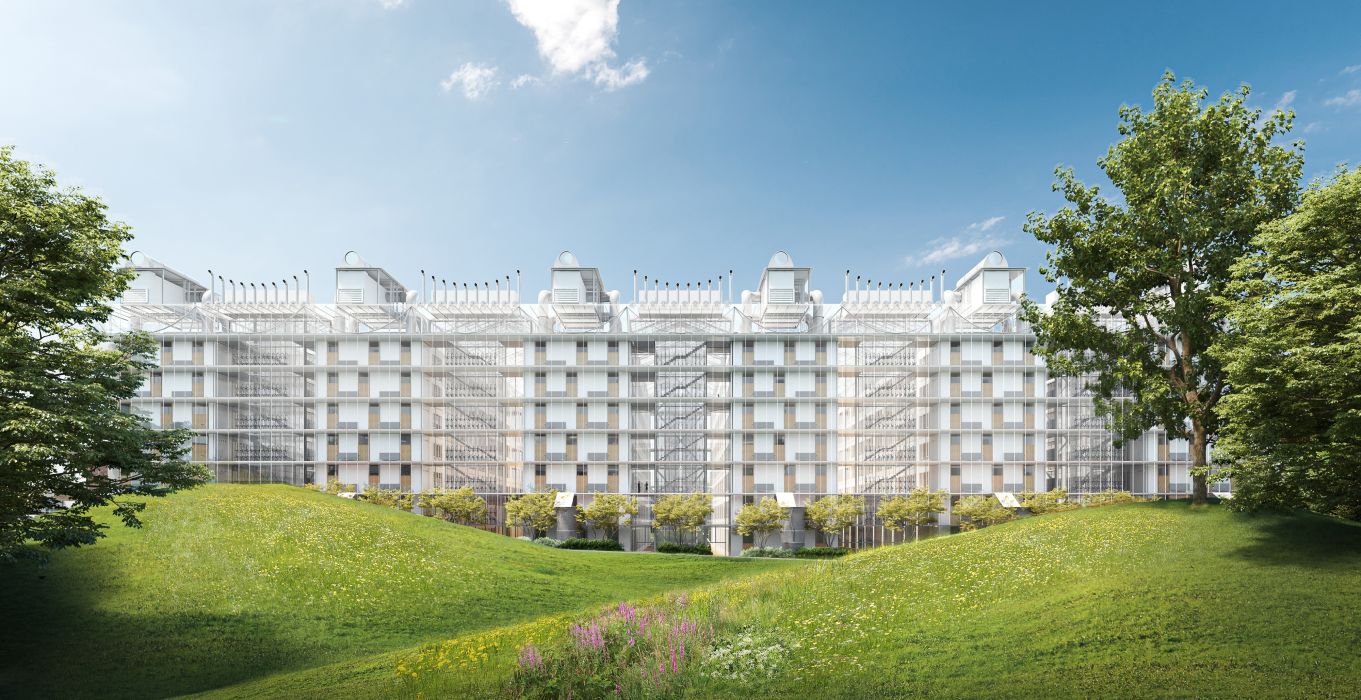 Competitions on invitation
Winning project
Former version of the project at the tender stage, new version at the planning permit stage.

The study begins in 2010 met the master plan (01/591) and the premises of ULB only. This project was granted a building permit on 2013-05-06.
The new version of the project, described hereunder, integrates the ULB and VUB applied science and science faculties with the industrial engineering section of the Haute Ecole Bruxelles-Brabant (HE2B).
On 2019-10-08 new application was made for a mixed planning and environmental permit joining the two ULB faculties (including a small part for the VUB) and HE2B in a single building known as E. This consists of six parallel “wings” (three for the ULB and three for HE2B) and five covered courtyards. All the floors are accessed by external walkways and stairs, and by lifts.
In terms of fire safety, the complex is treated as a single building organised on a maximum of seven levels, 134.05 m long, 62.40 m wide and 29.4 m high, falling into the “average” building category.
Building E mainly hosts auditoriums, classrooms, laboratories and teaching workshops, along with offices for admin staff, lecturers and researchers.
The majority of functions are housed in the standard floors of the wings, except for the HE2B mechanics workshops and the ULB’s aerothermodynamics workshops, which are situated in the space between wings, on two levels, under the floor of the covered courtyards ED and EH.
Location
The location of building E follows the main lines of the ground-plan in the competition and of the previous version of the project. Since the living accommodation originally proposed at the junction between the ULB and VUB campuses is no longer required, building E has been shifted northwards towards this line. The immediate surroundings of building E also reflect the overall vision in the original ground-plan.
Circulation flows giving access to building E are essentially channelled along the north-south axis running along the east facade of the building which links the main ULB Plaine Campus entrance (Access 2) to the future walkway to the VUB.
The building
Flexibility is one of the crucial demands of the project owners. This is obtained through geometric rigour, simplicity and uniform construction, this last being a source of economy, another essential requirement.
The aim is to construct a generic building (“shell and core”), a little like building U, from Square G to the ULB’s Solbosch Campus established nearly a hundred years ago, to meet both current needs and those that will emerge with the changing conceptions of the university and teaching, the nature of research and discoveries.

A standard level is 4.2 m high. This height gives the spaces great flexibility in use, while maximising light and natural ventilation.
The standard levels provide open floor plans 54 m long and 11.75 m wide. Corridors can be positioned either in the centre or laterally, allowing for very a flexible organisation of the space.
The “hard” nuclei at the ends of the wings contain the sanitary facilities and small technical, maintenance and storage areas.
The covered courtyards
The wings are separated from each other by covered courtyards. These are insulated enclosed spaces with a moderate temperature. They allow the creation of convivial spaces (for meetings, large assemblies, exhibitions, festival events). They greatly increase the compactness of the building in energy terms.
Their temperate atmosphere makes it possible to reduce the thermal insulation performance of the facades of the wings themselves.
Energy concept
The main energy principle of the building consists of protecting the internal environment through very high compactness (Cmax = 8.09) which varies with the external conditions. The covered courtyards act as a thermal buffer between the external and internal atmospheres treated within the wings.
During the heating season, the covered courtyards are closed and the compactness of the building is maximum, thus limiting heat losses by transmission and infiltration.
In autumn, spring and summer, when the external temperature is above 10°C, the courtyards are open to the external atmosphere, allowing the air to penetrate from the Plaine park to ventilate and cool the spaces.
Two double facades covering the south face of the EA wing and the north face of the EK wing complete the system, encasing the outer wings.
To complement this high compactness, the project provides for:
– Strengthened thermal insulation of the shell walls;
– Strengthened airtightness of the shell (n50 ≤ 0.30);
– Fixed solar protection using horizontal slats constituting the outer parts of the double facades to wings EA and EK;
– Active external solar protection on the glazed roofing panels of the covered courtyards;
– Fixed solar protection on the east and west facades of the covered courtyards also serving as guardrails on the external walkways and staircases;
– Vegetation on the flat roofs of the wings, acting as a thermal buffer between the building and its environment;
– Electricity generation by solar panels to partially offset the electrical consumption of the ventilation, air-conditioning and lighting installations, and other equipment;
– Combined heat and electricity production by means of a CHP unit using gasification of the wood obtained from maintenance of the Brussels parks and gardens, connected to the Plaine Campus heat distribution loop;
In combination, the two installations make it possible to achieve electrical autonomy. Since the electricity generation profile of the two installations does not correspond to the consumption profile of the building, the surplus produced will be returned to the Plaine Campus medium-voltage grid and will feed the other installations.
Improvements in relation to the previous version
These solutions build on and improve those of the project presented when the first permit was applied for in March 2011, in particular at the following points:
– The main horizontal and vertical circulation is external, and outside the functional volumes, facilitating their organisation and access controls;
– All floors are identical and organised in a logical manner. The number of a wing and the level suffice to identify a floor;
– The structure is positioned in the facade without intermediate columns, freeing up each floor entirely;
– The external walkways make it possible to combine vertical circulation and emergency evacuation routes across the different wings;
– The covered courtyards include a high proportion of earth floors, so that these spaces can be given over to biology and botany;
– The long facades entirely constructed in perforated sheet steel also provide surfaces for biology and botany;
– Heating consumption is reduced (from 47.4 kWh/m² to 13.5 kWh/m² annually) thanks to the increased compactness of the building, and the use of the internal volumes of the courtyards as reservoirs of hygienic temperate air, preheated by thermal exchange with the very high-performance rotary heat exchangers fitted on the roofs;
– The project provides for the retention and use of all the runoff water on the site to irrigate its green roofs and to feed the flushing mechanisms of the sanitary installations, the remainder being infiltrated into the infiltration basin provided to the east of the building.

Credits
Architecture and Engineering:
Philippe SAMYN and PARTNERS All projects are designed by Philippe Samyn who also supervises every drawing