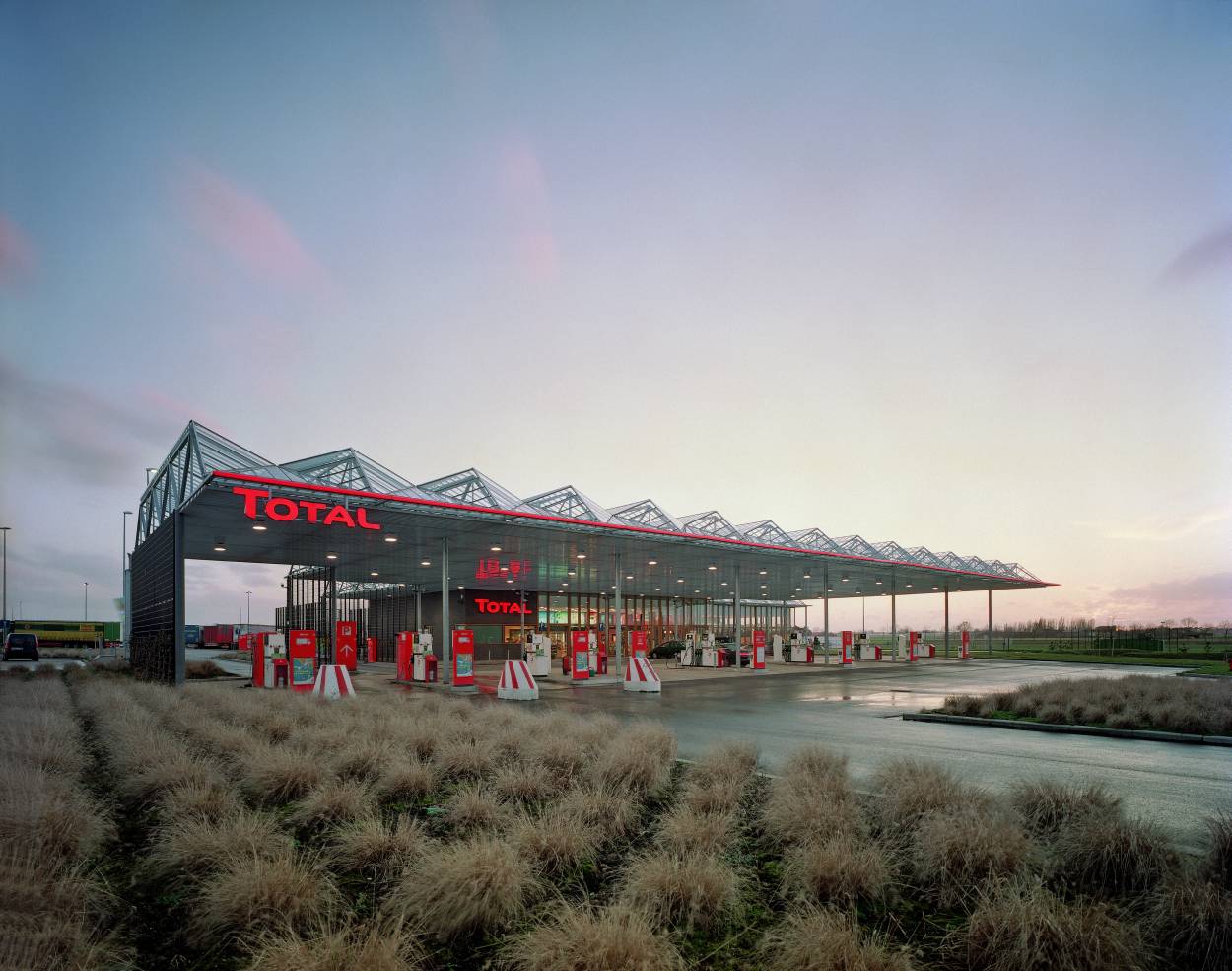 The site is a flat plateau on the MINDERHOUT rest area along motorway A1-E19 in the BREDA-ANTWERP direction. It is surrounded by fields that end in rows of trees lining the country lanes in the surrounding countryside. A fast speed train track now under construction separates the site from the motorway.

On one part of the site, the project concerns the three elements of a service station: car parks, the petrol station and the service centre. The site has been raised partially to put in the car parks, and this part has been chosen for the location of the buildings to offer users a view of the open countryside.

By concentrating the programme on a small part of the site, the constructions have a smaller impact on the landscape: the largest part of the terrain can be used to landscape a new green zone which works as an extension of a nearby protected natural area consisting of a forest and a large pond. That extension will be accessible to travellers. This is an advantageous solution complying among other things with the specifications of the project that strongly emphasize the idea of sustainable development.

A large window-roof, reminiscent of the large greenhouses in the surrounding fields, covers most of the programme, giving coherence and legibility to the whole. This window-roof includes a ceiling in light-coloured wood slats that filters the light if the sun is too strong while generously providing naturally diffuse light in the service station. The atmosphere created corresponds to a covered marketplace, friendly and secure, where visitors feel they are welcome.

A single building was preferred to a number of constructions scattered in the landscape. The restaurant and boutique are arranged around a patio covered by a broad window-roof. This acts as a rest area for travellers and facilitates understanding of the organization of the building complex. The patio can be reached both from the paths around the building and from the parking lots.

The storefront carries large windows facing the paths, and it opens generously onto the patio. Transparency and intense lighting give travellers the impression that they can enjoy a refreshing rest calmly and safely.

The restaurant stands on the other side of the patio. To give a feeling of open space, it has large panoramic windows facing the grounds that run from the foot of the building to the edge of the neighbouring fields. A large terrace runs along the storefront. A landscaped pool and long rows of standard trees further reinforce the ties between the landscape, the surrounding nature and the buildings.

The facades are all coved in ivy, blending the building into the natural setting. High screens extend the facades of the buildings to create enclosures for the outdoor service areas.

The car parks are built according to the plans of the company that is putting in the new high-speed train track. The building and the new paths are within easy access of the car parks, as they are set as close as possible to the outdoor parking areas. An additional parking lot for lightweight vehicles is created to bring travellers still closer to the buildings.

The site is landscaped with particular care. The rows of trees are a cultural element of the local or regional countryside where they line country roads and lanes. Integrated in the composition, they reflect the dynamic of the motorway and high-speed train track, which provide the main lines of the site.

A long, straight canal emptying into a storm basin collects rainwater off the window-roof. The banks of the basin are fitted out as freely shaped floodable zones. A cluster of reeds contributes to the solution for the wastewater produced by the building.

The basin separates the site into two parts: one area that is mowed once a year, where wild flowers and grasses grow naturally, and the other, where visitors have access, that is kept up more regularly.  Mounds are scattered over the site. Some of them near the parking areas are fitted out as playgrounds or picnics areas. Because of their shape and their raised circumference, these mounds offer a restful, safe area for children and parents.