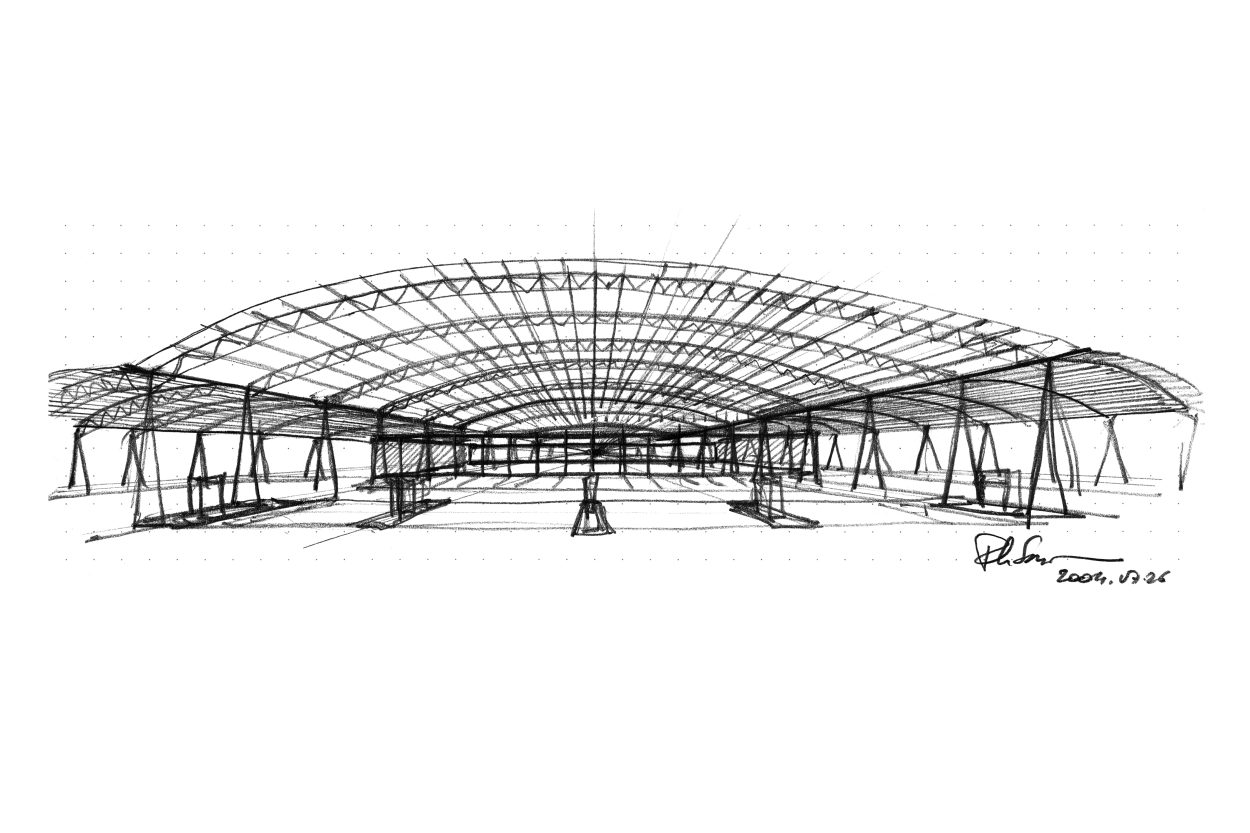 The proposed project deals with the entire site, giving it a coherent, consistent structure.

From an overall standpoint, the long curves formed by the lines channelling the various traffic flows trace a leaf shape that easily comes to mind in this thickly wooded region.

The smooth curves of a dual bridge connecting the two parts of the rest area on either side of the motorway fit into this pattern.

The various traffic flows come together regularly at roundabouts that limit driving speed and let visitors choose their destination or change direction.

The north-west area with no service station, serves for lorry parking. It is shaped like a frond branching off on both sides of a tree-lined central driveway. This driveway links to the entrance roundabout, whose important function is to slow down traffic, and to the roundabout giving access to the bridge. The car park stands here, with a picnic and relaxation area in the centre.

Traffic in the south-east area, and in particular at the entrance and exit of the site, is also organised generally around two main circles.

The roundabout on the south-west leads to the service area that holds the first car park and a central picnic and relaxation zone.

The exit roundabout in the north-east, also lets drivers go back to the rest area.

Actually, vehicles can reach any parking place as well as the service area from anywhere on either side.

A second circular car park stands north-east of the service building with an inviting, direct access to the building. It is constructed at a lower elevation to afford an uninterrupted view of the beautiful landscape from the restaurant and the terrace.

For the same reason, lorry parking stands on lower ground as well, on the south-east of the site.

The buildings are designed for maximum transparency, to minimise their visual impact in the landscape and to create an atmosphere of relaxation and hospitality.

The petrol station area is covered by a large glazed canopy in three cylindrical vaults borne by steel trellis arches.

The central vault has a span of 33 m, covering the car petrol station; the south-east vault spans 18 m over the lorry petrol station and is symmetrical to the north-west vault over a car park zone.

So this entire area is naturally lit while travellers are protected in a pleasant, relaxing atmosphere.

The public areas of the building are also covered with a low cylindrical glass roof in double-glazing with a low solar factor equipped with outdoor sunshades.  This means that this area is pleasantly lit with natural lighting but without overheating from the sun (adjustable openings give natural air conditioning). In the evening, the sunshades form a lit ceiling.

The south-west and north-east tympanums consist of a wooden frame and single glazing for longitudinal transparency of the construction, which prolongs the effect of the canopy spanning the petrol station area.

The zone open to the public is erected along a central aisle crossing the building kitty-corner running south-west to north-east; this open access zone includes the boutiques, the relaxation area, the toilets, the fast food restaurant and the traditional restaurant.  The support functions and toilets stand on the sides of the building.