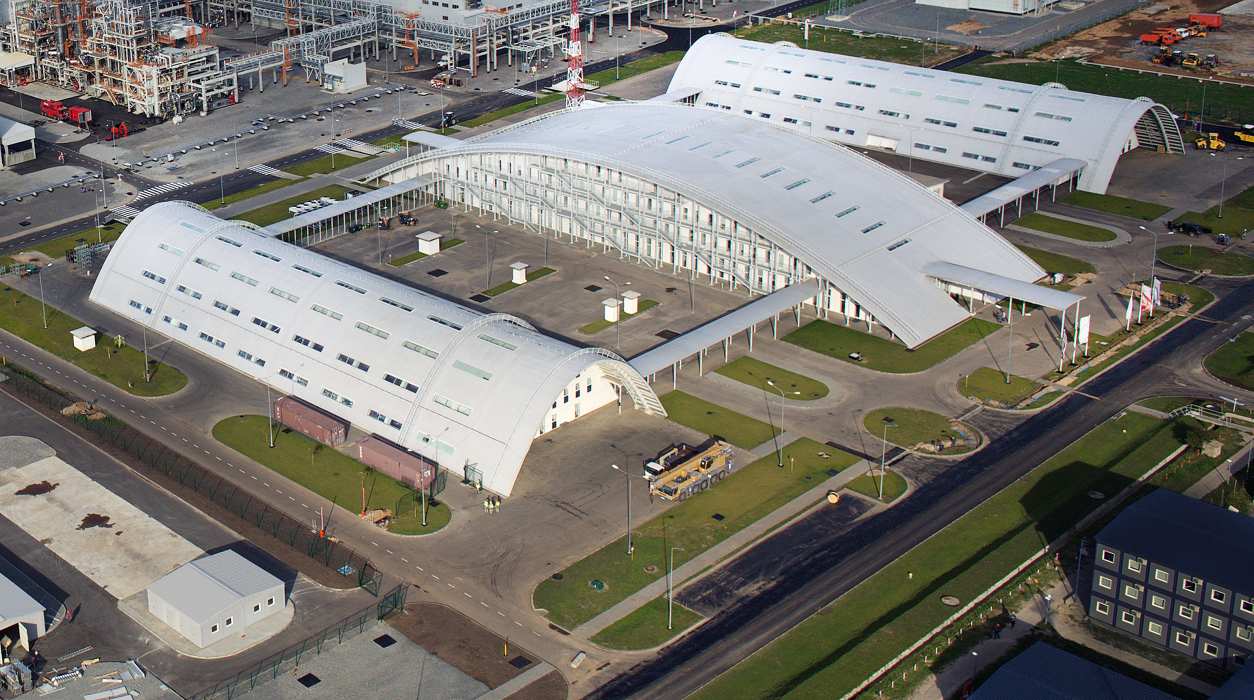 The industrial zoning area of Kstovo, near Nizhny -Novgorod, at about 450 km to the east of Moscow, is the site selected for the future PVC factory of Rusvinyl, a group issued from the association of Solvay and Sibur, subsidiary of Gasprom.  The technical firm Technip France is responsible for the engineering of the ensemble, with the assistance of its Russian subsidiary. This current project is intimately integrated within the ensemble and concerns the administrative area of the factory, the interface between the factory and the outside world. It includes the development of the exterior, and the construction of offices, laboratories and workshops required for production.

The plan groups three buildings in parallel bars perpendicular to the access road, like connecting traces between the factory and its surrounding environment. These buildings are situated as closely as possible to one another in order to economize the terrain, to enhance interaction among various functions and to reinforce solidarity among the personnel. The parabolic roof structures confer an open character to the intermediate areas while facilitating the natural evacuation of snow.

The three buildings are connected to one another by covered pedestrian walkways that form interior courtyards used as parking lots.

At the center of the ensemble, the administrative building develops along its length between the access road and the factory. Visitors enter at the front, near the restaurant, under a protective awning that leads them to the heart of the structure. Opposite, on the factory side, the control room manages the totality of the production site.

This edifice is organized in two parallels bars between which there is a large atrium illuminated by natural light. Stairways and walkways follow its structure and give access to the upper levels. Laboratories and offices occupy the first and second levels, while the technical rooms are located on the third level.  On the exterior of the building emergency galleries and stairways follow along the façade in a similar fashion as the interior stairways and walkways are disposed.

Under their parabolic cover, the two lateral buildings house vast areas useful for the installation of workshops. At the center of these areas there are closed block structures for the painting workshop or the electrical sub-station. In the north building, the instrumentation workshop occupies the space at mid-height along its entire length.

The parabolic geometry combines a maximum of interior space with a minimal covering surface, which economizes material and diminishes the surface susceptible to thermal loss.

Access to both buildings is at their gable ends through a closed entryway. Interior stairways lead to the cloakrooms and offices that are disposed on all three levels in the end bays.

Issues of economy that are common for industrial production sites guide the choice of materials and construction techniques. Only the care and attention in the definition of the geometry expresses architecturally the identity of the ensemble. Thus the structural system is extremely simple and repetitive. Pre-stressed rough concrete slabs of identical dimensions follow from arc-to-arc in the workshops and from wall-to-wall in the offices. A similar generalized modulation used in all the buildings also allows the serial production of identical elements: the concrete walls of the central building, the arcs of the workshops, the window and door frames and the wooden panels that are apparent on all the exterior vertical facades. Each building is illuminated by windows placed flush with the PVC roof finishing membrane.