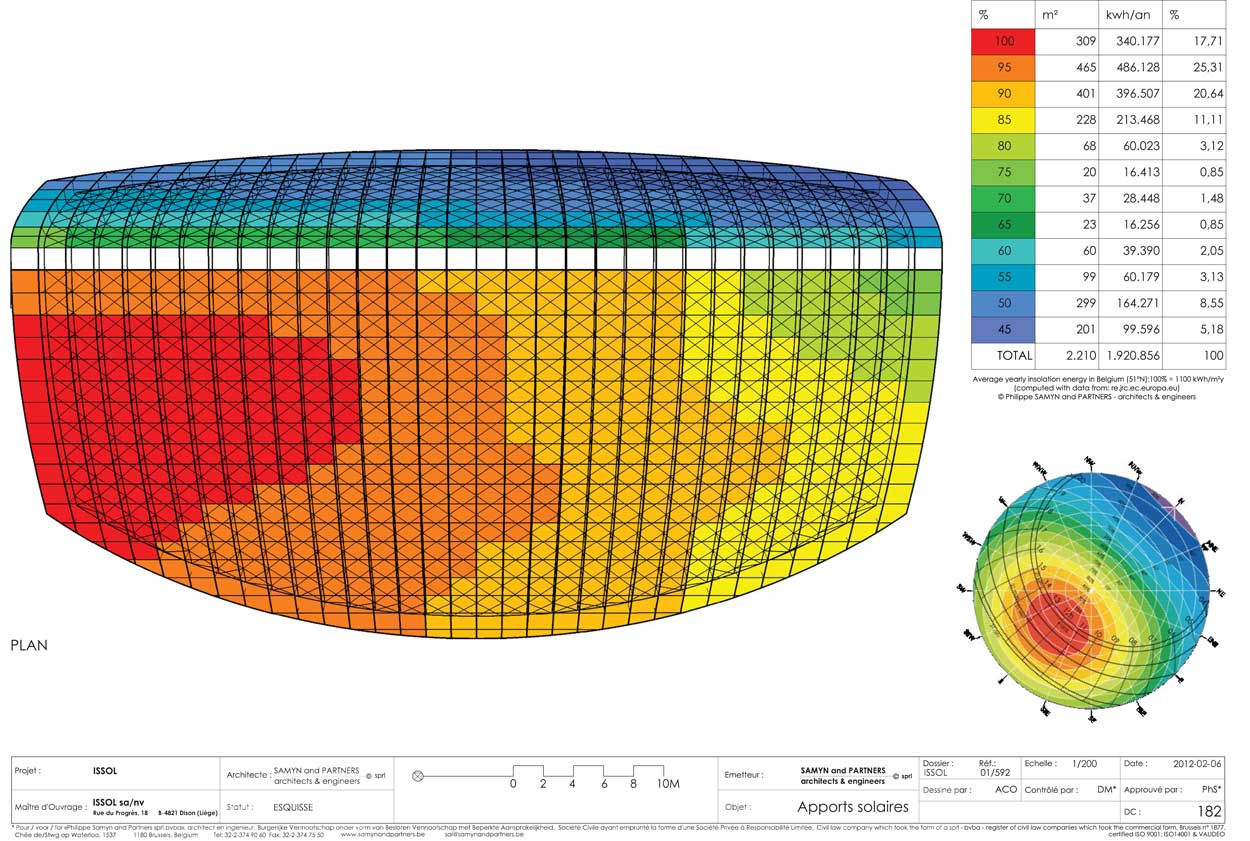 ISSOL is a company specialising in the design and manufacture of photovoltaic panels with high added value, established in the Verviers region (Belgium).  The continued growth of the company calls for an expansion of the current plant through the construction of a new production hall. This must also demonstrate ISSOL’s expertise in the area of BIPV (Building-Integrated Photovoltaics) via a full covering with PV panels.

The shape of the hall, an apparently complex ovoid, is actually the result of an extremely simple geometric process.  The structure’s basic element consists in a metal arch in the shape of an asymmetrical parabola (so as to give an optimal slant to the PV panels covering the south façade, and a steeper slope on the north side).  The arches are all implanted in planes radiating around a horizontal axis, thereby forming a toroid segment.  This way of constructing the structure, despite the ovoid shape of the whole, is particularly economical since all the arches are rigorously of the same shape.

The arches, with a maximum span of 30 m and a maximum vertical clearance of 15 m, are made of curved composite metal beams of height 100 cm, bearing a watertight photovoltaic glazing in their upper part and an airtight insulating skin in their lower part.  The upper edge of the volume is fitted with heliostats which capture and distribute the natural light in the hall.

The extension is placed in a free space which allows it not to be disturbed by the shadow of another building. A water area makes it possible to increase the output of the photovoltaic cells of the North-West façade.

A gallery running from the office and storage buildings crosses the new production hall to arrive at the finished product sending room. This gallery thus allows for a simple and efficient connection between the different buildings whilst facilitating any future extension work.

The hall has almost zero internal inertia so as to control the indoor climate as closely as possible via ventilation. High intensity filtration guarantees appropriate air cleanliness for the delicate technology implemented in the hall.  The hygienic air is partly cooled thanks to the nocturnal coolness stored by the outdoor water area. A buried frost-protected water tank for its part stores the heat absorbed by the air present between the two layers of the envelope exposed to the sun’s direct rays.

The production hall fits in perfectly with a sustainable development process via a range of themes. The theme of recycling is dealt with through the production of the floor from salvage wooden planks, as well as through the production of foundations that are removable in the long term, in the form of sand drains contained in textile ‘socks’. The building internal insulating skin is made up of panels covered in textiles designed by the protected Verviers workshop.  This production thus touches upon the social aspect of sustainable development.  Lastly, the energy aspect is dealt with through the external envelope.  Completely covered with a photovoltaic skin made in the plant itself, its electrical production capacity represents 150 % of the total needs of the plant.  The extension shows that it is possible to reconcile financial profitability and the environment.

2118 m²
In collaboration with Arch. Vincent BOVEROUX and Engineer Jean-Philippe LEMAIRE  for the building physics.