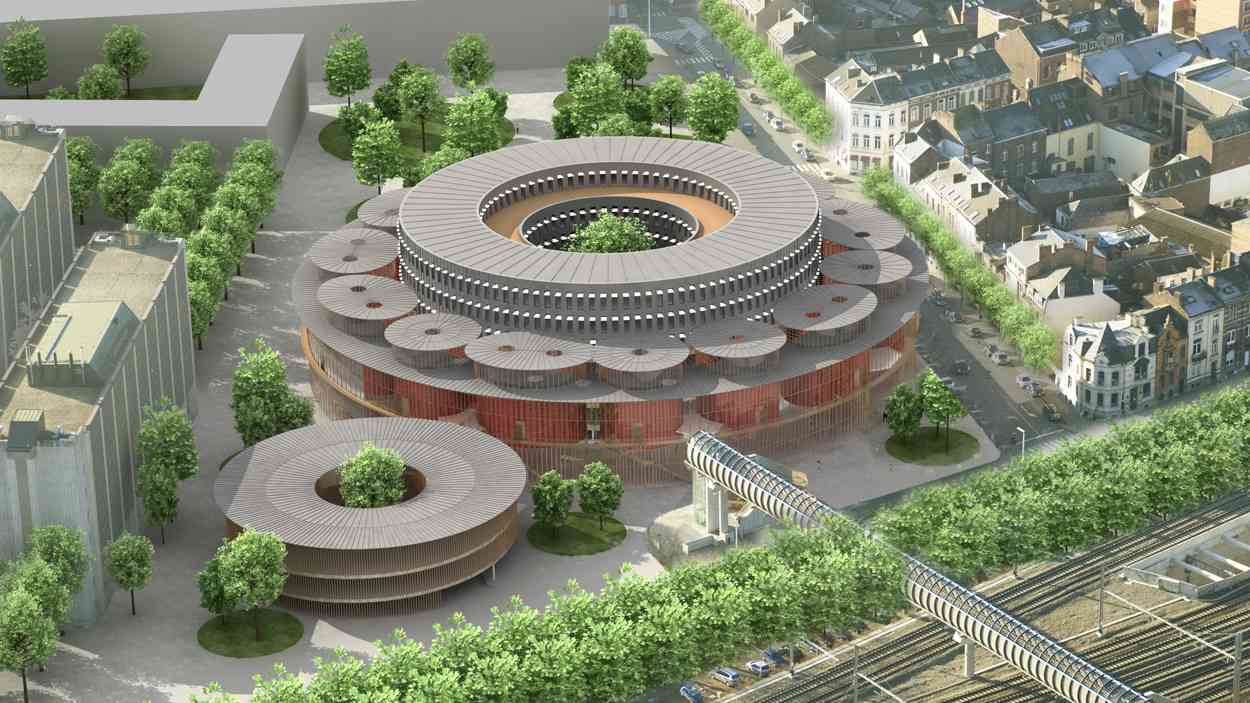 Layout and integration into the urban context.

The three Finance Ministry buildings give the location a very strong identity, creating a striking contrast with the organicity of the layout and the buildings of the City.

The town-planning project, drawn up before part of the block was set aside for the Law Courts, sensibly aims to repair the urban fabric by making the most of the few remaining brick buildings.

The importance of the programme leads to suggest a slight adjustment to the town-planning design, without losing any of the construction density.  The proposal involves combining complementary structures in the Finance Ministry and the Law Courts to create an open complex in the shape of a ”6”, including the African Museum and retaining the alignment with rue des Bourgeois to the south and rue du 1er Lancier to the west.  However, unlike the original plan, the proposed built-up facade is moved a fair distance from rue Général Michel, so as to make way for a trapezoid market square-garden  following on perfectly from the existing esplanade at the Ministry for Justice, the stone surface of which is extended to cover the entire block.

This vast open space is essential if the complex of buildings is to “breathe”. Four large grassed circles to the west of the Law Courts, along with a small circle to the north, all planted with standard trees to the north, will make this area a public park.

The proposal also includes rows of trees in line with the columns of the car park in the basement of the Finance Ministry to emphasise the linearity of the composition.

To the north of the site, a row of trees planted in the northern pavement of rue Général Michel maintains the intimacy of the houses and enhances the planted area.

The current position of the access to the underground car park of the Finance Ministry is a serious disadvantage in terms of the layout of the area as it brings unwanted traffic to the heart of the block. This is why a proposal is being made to move the access to the south of the site, towards rue des Bourgeois, so that the entire surrounding area is a mainly pedestrian zone.

Given the specific character of this site, the visual autonomy of the footbridge spanning the boulevard Cauchy should be preserved.

At the heart of this quiet, airy block, the Law Courts are housed in a large building made up of concentric cylindrical rings. There is also another aedicula comprising the public car park and covering the access ramp to the staff car park, the area set aside for the police vans and the area set aside for delivery vans.

The aim here is to convey the idea of neutral, independent justice, above all suspicion. The building is therefore, a priori, large and free of scales, as it has to stand out as an absolute.

The architectural challenge is therefore to reconcile the grandeur and nobility of the institution with the human scale and that of the town.

The cylinder seems the obvious choice, both in view of its symbolic value and because of the fluidity of its shape, which reduces the visual mass.

The building is made up of a central, ring-shaped cylinder with seven levels comprising all the above-ground functions with the exception of the courtrooms.

These courtrooms, of which there are 14, take the shape of circular or oval cylinders. They are placed on pilotis around the edge, surrounded by an external double cylindrical ring in clear glass, fitted with blinds on the inside of the outside windows, forming the concourse.

The Assises rooms, which is the largest and most serious, extends slightly beyond the normal cylinder and covers the main entrance to the Law Courts. It is located to the west of the building, virtually in line with rue Dewez.

The inner courtyard of the building is adorned with a circular garden containing a single, fine tree.

The outer shell is in transparent glass on a pale wood frame. It is fitted with white fibreglass fabric blinds offering good opacity to the sun from the outside but good transparency when looking from the inside out.

The series of blinds that can be lowered and raised zone by zone depending on the time of day and the amount of sunlight keep pace with the weather and the seasons, while at the same time guaranteeing comfort inside the building and good energy management.

This means that the courtrooms may be either concealed from view by blinds or visible. The trimmings on the courtrooms are in the crimson brick that is so characteristic of buildings in Namur.  They are supported by one or two solid cylindrical columns, as can be seen in the perspectives (the plans show a less expensive variant in which the rooms are supported on sets of six narrow columns in fire-resistant steel).

Located on the second floor, the courtrooms are accessible to the public from the concourse through two rooms. Pairs of stairs lead up to them. These have been developed along monumental lines but are modest in construction, with wooden steps, along with glass-sided lifts for disabled people.

The seven landings to the 14 rooms each form a balcony overlooking the public area.

The areas covered by the rooms on the ground floor form the outer fringe of the concourse. With a height clearance of 5.40 m, surrounded by an outer shell of glass and semi-cylindrical frames opening toward the outside, they are used as  waiting and consultation rooms.

The display cases created in the gap between these spaces and the outer shell can be used as areas for exhibitions, communication and teaching which the justice department is so eager to have.

The area of the concourse through which people will pass, free of all obstacles, sufficiently large and fluid to enable security vehicles to pass through in a crisis, is surrounded by the counters of the various registrars’ offices, making them clearly, easily and directly accessible.

The public washrooms are easily but discreetly accessible on level -1.

The Juvenile Court can be accessed directly from rue Général Michel without having to go through the concourse.

The central building contains all the rooms in which daylight is required and which must not be too far away for functional reasons. The stairs and lifts, the washroom areas and the service rooms are contained in a ring in the central area.

The facade overlooking the concourse comprises a glazed wooden frame from floor to ceiling so as to make maximum use of borrowed natural light.  The adjacent rooms contain sprinklers.

The outer facades are coated with zinc and the windows are organised in a tightly packed vertical pattern. The width of the apertures, fitted with light shelves and outside blinds, varies, being wider to the north than to the south, so as to benefit from natural light in appropriate proportions.

The basements are kept for archives, parking facilities, deliveries, cells and technical areas.

From the concourse, visitors can go directly either to the fourteen courtrooms on the second floor or to all the registrars’ office counters on the same level.

All these routes are kept strictly separate from those used by visitors and lawyers. The latter, along with Buildings Agency and the caretaker, have a separate access to their rooms on the fifth and sixth storeys by means of programmable lifts.

On level -2, prisoners are taken from secured two-door accesses for police vans to the cell area. From there, a direct and separate route takes them to level +1 in a buffer zone, from where they can be taken to the courtrooms by means of five staircases, and to level +3 to the various public prosecutor’s offices.