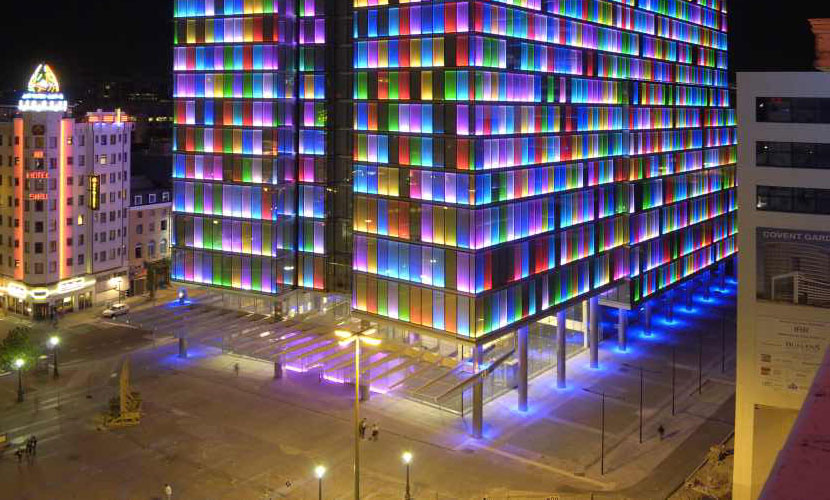 So the main lines of the plan are parallel to the layout of the North neighbourhood, while acknowledging the other angles in the perspective of the site.

Organization of the interior

At the corners between the lateral galleries and Place Rogier, two large lobbies welcome the public and the office staff and lead to the main lift column.

Whereas the blocks are parallel to the street on both sides, the lift tower is perpendicular to Place Rogier. The space remaining between the 2 wings houses the central core that channels the main vertical traffic, the lifts and emergency stairwells, as well as the vertical service and sanitation shafts.

This central vertical core extends above the two main wings, with its top housing the lift machinery, plus boiler rooms and ventilation equipment.

At the back facade and for the most part along the Rue du Progrès, the 9-storey base respects the outline of the street. The rooftop of the ninth storey of this base carries the heavy technical equipment (cooling equipment, …), under louver boards that hide it from the occupants of the neighbouring towers.

Finally, the project exploits 4 underground levels holding 440 parking places. A traffic study of the entire district also provides for an underground access to this car park, freeing the street level for pedestrian traffic, as automobile traffic is limited to exceptional deliveries by large trucks.

Unloading bays are located at the back of the ground

The first and second storeys of the base include an auditorium with seating capacity of 275 and smaller meeting rooms around it. A restaurant with seating for 600 to accommodate the office staff is located on the second and third storeys. floor, in Rue Bertulot.

The last two storeys of the base are organized around an indoor patio mounted on the roof of the restaurant. A standard L-shaped storey can be broken down into large landscaped office areas unbroken by columns of any kind.

This organization is maintained as the floors decrease in size in the levels topped by the panoramic glass roof.

In the offices, the windows run from the floor to the ceiling, at 2.70 m. The components consist of ventilated  double glazing from which the hot air is recovered by the air conditioning system. The outer glazing is fixed and continuous, while the inner glazing allows for maintenance of the equipment, particularly the anti-glare blinds contained in the double layer.

Between two glazed components, opaque components house the slabs and false ceilings; they could also be used to hold panels of photovoltaic cells.

On the outside, light-shelves provide a rough surface for the facade to limit the flow of wind. These light-shelves only partially cover the main wings, to underline the vertical aspect.

The base is set off by a different treatment of the facade that does not include light-shelves.

Evolution of the study

Since the building has found a potential buyer, it has been adapted to the needs of that company in an application for an urban planning permit filed on 2002-10-30.

The main modifications were the following:

Rails, with light emitting diodes (LED) lamps in the 3 primary colours, were added on the double façade, so that each window frame could have a different light colour and exclusive façade animation could be created. This Space Canon system is installed by Hedi Light.