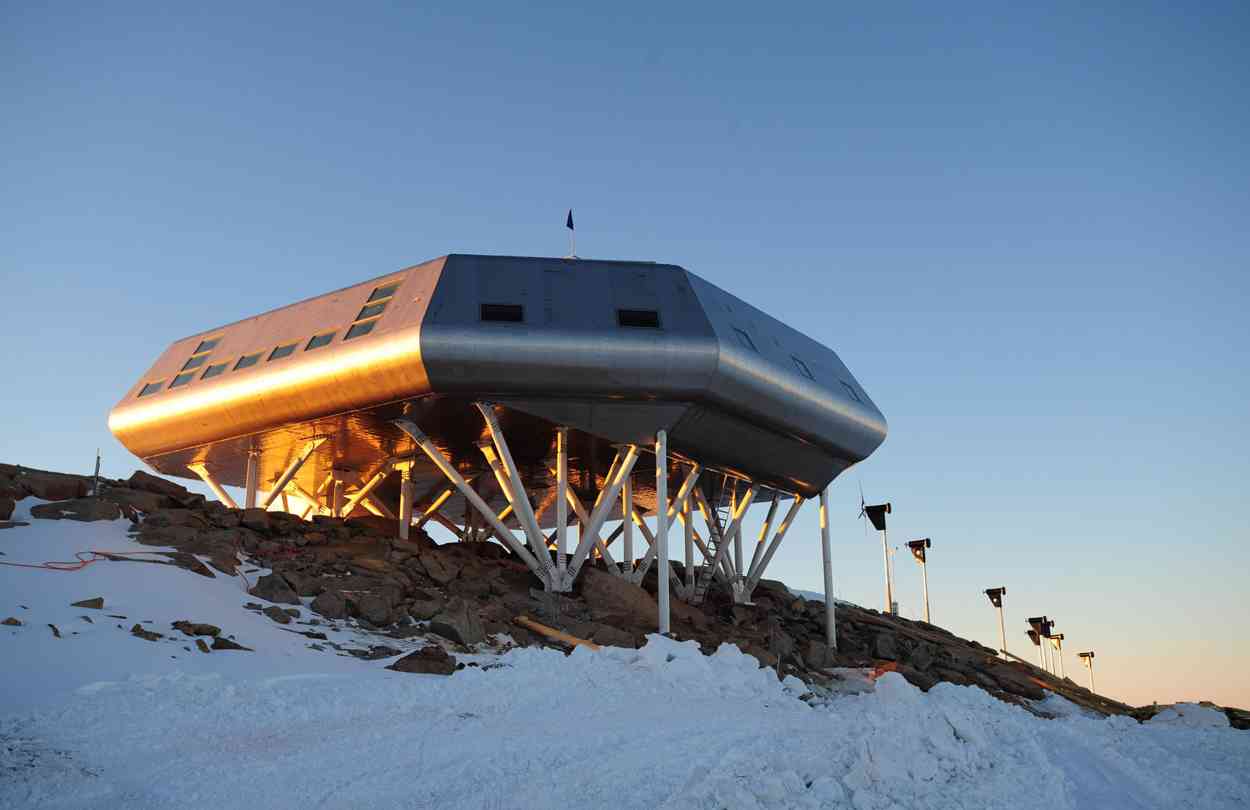 Engineering and technical design for the structure and the shell

The International Polar Foundation (IPF), led by the civil engineer and explorer Alain HUBERT, was commissioned in 2004 by the Belgian Federal government to design, construct and operate a new Belgian Antarctic research station.

Princess Elisabeth, the world’s first “zero emission” polar station, stands now at 72°S 23°E on top of a granite ridge, north of the Utsteinen Nunatak in the Sør Rondane Mountains.

Several factors influenced the final form of the station developed by the Foundation design  team led by Johan Berte and Nighat Amin, in particular:

1) The environmental conditions: extreme wind     speeds, stable wind direction, very dry atmosphere, sub-zero temperatures, snow erosion and accumulation, and the potential “blasting” by grit and stone projectiles. The building has to stand at an average of 2m above the underlying ridge to prevent snow build up. The von Karman Institute for Fluid Dynamics has been closely involved in elaborating the final shape, through the establishment of the wind force distribution and intensity on the building using a wind tunnel model based on actual in situ wind velocity surveys.

3) The functional program: scientific and living spaces provided in function of the research programs likely to be run from the station.

Based on the preliminary aerodynamics and energy studies, Samyn and Partners architects and engineers have been entrusted with the task of studying the building concepts, The extremely shorttime-frame for the execution of the project has led to a “design and build” approach, and Prefalux (of Luxemburg) was invited into the team to accelerate the process under the control of SECO (Belgian Building Control Agency). Prefalux has already built various refined wooden structures for Samyn and Partners and the quality of their input is an established fact.

Samyn and Partners has developed a sub-structure, built by the firm Iemants, composed of four steel trestles, which may expand and contract independently of each other, and which support a large wooden superstructure.  The trestles are anchored in the non-uniform, surface weathered, granite bedrock and are shored by 6m deep tie-rods such as to provide a reaction to the important wind uplift experienced by the building. The anchorages have been drilled with the Smet Boring company. Not only the drilling of the station’s anchoring points was the most important part of the first building stage, but it was the most difficulty to carry out because of the composition of the rocks and their unequal disposition.

The envelope of the superstructure covers an orthogonal grid of trusses expanding from floor to ceiling in laminated wood elements assembled with Blumer type connectors.

The wall and roof parts of the envelope are composed, (from inside to outside) of:

The floor (continuous with the upper envelope) is nearly composed in the same manner (from inside out):

A steel plate lies between every column and connects with the continuous floor vapour barrier.

The design, concept and developed prototype were approved at the end of April 2007. The pre-assembly and testing of the whole building has been carried in Brussels during August 2007.

The final assembly and construction has taken place during January and February 2008 on site in Antarctica under the personal direction of Alain Hubert.