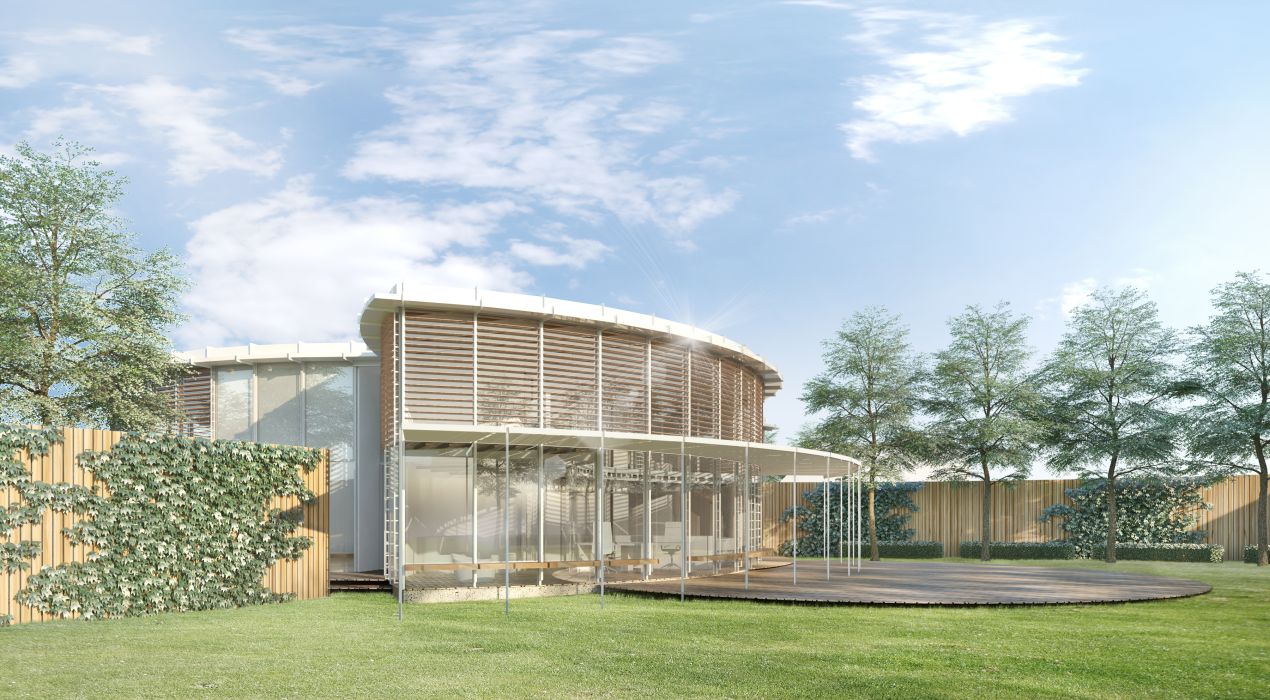 In a beautiful agricultural area, situated within the landscape of the Meetjesland region, in the north-west part of East Flanders, and only a stone’s throw from the centre of the village of Sint-Laureins, an aspirational project is developing, which will make a further contribution to the history of this community. On this generously dimensioned plot of land, some 100 metres wide by 130 metres deep, that features some surviving agricultural buildings and an old farmhouse – partly dating to before 1830 – It is the declared aim of the client to treat these structures with great care and restore them to their former glory, with an organic, living purpose.

The existing buildings will be handed over as shell constructions so that they can be incorporated within the ‘De Laender – Rogge Foundation’. This will be similar to the existing example of the famous ‘Veranneman Foundation’ in Kruishoutem. Somewhat further from home, we can find yet another example: the ‘Isola Comacina’. This is an island located in Lake Como in Italy. The ‘Vlaamse Gemeenschap’ [the Flemish Community] is part of the foundation that manages the island and the ‘Comacina Foundation’. A residential building on the Isola Comacina is designated for artists in all disciplines that fall within the scope of the ‘Arts Decree’, such as music, dance, visual arts, stage, musical theatre, etc. Just like the intended purpose for the ‘De Laender – Rogge Foundation’, this island is not a location intended for group activities, but is instead designed for individual artists. This green space will become a refuge for young artists from underprivileged backgrounds who will be able to enjoy the facilities offered by the owner. In addition, the artists will have the opportunity of incorporating the environment into their work. At the present time, nature and biodiversity, with the native trees, flowers, plants, small animals, insects and micro-organisms form very topical subjects within the world of the Arts so that the ‘De Laender – Rogge Foundation’ can and will continue give access to them. The incorporation of such a cultural location also represents an enrichment for the entire environment. Hence, inhabitants of the village and the surrounding area will be able to keep track of the various vernissages and exhibitions to be organised. This coming together, this interaction of ideas, personalities and visions will ensure that private interests are subordinated to the interests of the community. However, let us be absolutely clear that it is by no means the intention that dozens of interested visitors will go to the Foundation every day, and create a potential nuisance. In all calmness, the family creating this project wishes to promote a very valuable cultural activity in open dialogue with the local community and the residents of the surrounding areas.

The creators of the Foundation, Mr Johan De Laender (1962-08-08) and Ms Evelyne Rogge (1973-06-27) and their young son Orphée (2009-07-20), desire to give opportunities to young artists. In their professions the creators are active worldwide, and over the years they have become true world citizens. Thanks to the knowledge and experience they have gathered on a global scale, they are very conscious of the issue of sustainability and the environmental impact of us humans. This is one of the reasons why the client is so passionate and engaged to ensure that the whole of the site is self-sustaining, including energy supply and wastewater treatment. This also covers the various other functions that nevertheless work in harmony. In addition, their respect, admiration and wonder for the environment also work to their credit. This means that the canals on the development site will also be restored to their former glory, while the dense vegetation at the roadside, which is a specific habitat for starlings, a protected European bird species, will be preserved: in short, the whole development of the site, with its valuable buildings, will represent a true part of the heritage of this municipality.

With regard to the single-family dwelling in the centre, the aim is to add further utilisable space, without destroying the valuable existing constructions, while enabling the present architectural spaces to expand to meet one another. At present, they are scattered individually around the site and do not form a whole. Furthermore, one of the most important aims is to ensure that the new building units can be dismantled. The wishes of the client go even further: the new constructions must be entirely recyclable. The architectural aim means that the new spaces should be integrated as fully as possible, not only within their surroundings in the landscape, but also within the local and rural context. According to the zoning plan, this site is located entirely within an agricultural area although, in the municipal area structure plan [“GRS”], the location concerned is allocated as a construction zone. Consequently, the client and the architect must pay great respect to the existing situation, as well as to the client’s vision of the future, in which the visual and ecological potential of the site must be preserved and accentuated as much as possible, which comes to light in the design process of Philippe SAMYN and PARTNERS.

This enquiry is clearly not an everyday matter, and represents a confrontation with the current general building regulations. Nevertheless, the whole design is seen to be a very logical consequence of respect for the existing situation and a sincere vision for the future. If one had to obey the current regulations to the letter of the law, then the habitat of a protected bird species would have to be removed. Similarly, the old dwelling house would have to be removed if one wanted to build a single-family house fulfilling the present standards. We can state that the current regulations would jeopardise the project of the ‘De Laender – Rogge Foundation’ to provide support to the arts, and consequently the evolution and further development of the countryside. The creation of diversity in activities outside cities confers an enormous breathing space to town dwellers who, even 50 years ago, had need of such a ‘breathing space’, with the well-known consequence that many country houses were constructed in such rural areas.

In summary, we can state that the enquiry for this project consists of two parts. On the one hand, there is the restoration of valuable existing buildings to produce external structures which can be used as artists’ studios or exhibition spaces, together with the maintenance and extension of the existing biological biotrope. This offer of Nature and organic activities will serve as a true catalyst for the evolution of contemporary Art.

On the other hand, this design requires a sensitive construction process that is entirely responsible from an ecological point of view, designed for living, sleeping, dreaming, thinking and working that interlinks the concentration of the buildings on the site into a single homogenous whole.

The openness to the beautiful agricultural landscape around the village of Sint-Laureins, the bringing together of a number of renovated, detached existing buildings and the revival of undeveloped land not only delights the family in residence, but gives an enormous contribution back to their environment. The client’s vision may become a catalyst for the entire neighbourhood in the surroundings, and perhaps far beyond.