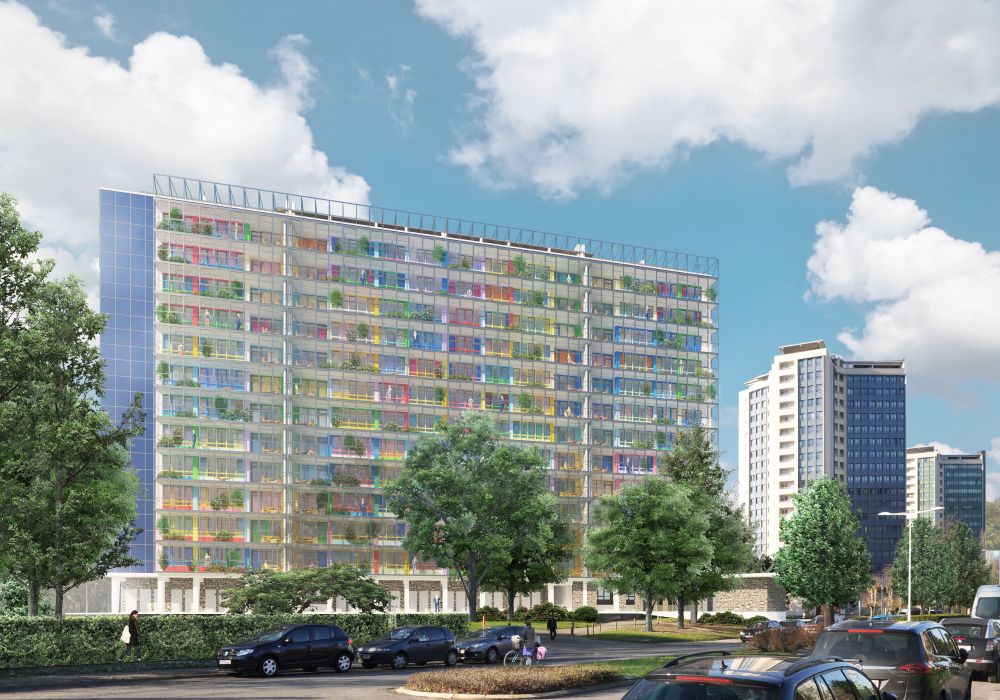 Designed by the architect Gaston Brunfaut, working with Albert Vanden Bosscheat, and built at the end of the 1950s, this tower block typifies the construction methods in vogue at this time. Notably, the facades are made from precast concrete elements, comprising aprons and frames, and fitted with single-glazed windows. The aim of the project is to raise the energy performance of the building envelope, which is currently very poor, to a level higher than current standards, and to pay particular attention to issues relating to maintenance and upkeep.

The project shall also endeavour to integrate the tower block more favourably within its urban environment. The building exemplifies the functionalist approach to inner-city development which dominated after World War II: high-rise mass housing in urban peripheries, exposed to the elements, with a focus on uniformity of detail and building orientation, in an open and monofunctional urban environment, the best examples of which feature green spaces.

The fact that the buildings are tall is not the problem, far from it[1], and it is not this characteristic which requires attention. It is the monotony and isolation which needs to be addressed: if the project give the occupants the opportunity to “own” their home, then a community spirit might be reawakened. The inhabitants could then benefit from the positive elements provided by the functionalist developers: a spacious and green environment, with magnificent views over Brussels and the surrounding areas.

The architectural concept adopted for this project is very different from the uniformising approach which dominates the design of the existing tower block. Instead of conformism and repetition, the project seeks to encourage diversity. The inspiration is Lucien Kroll’s La Mémé rather than Le Corbusier’s Cité Radieuse.

A curtain wall is suspended 1.50 m in front of the existing facades. The space between the two facades increases the living space and creates a conservatory area, which can be used during most of the year.

This double facade creates a thermal buffer zone and allows more precise control of the indoor climate – achieved by opening/closing both the external and internal openings. It significantly improves the building’s energy performance and to a large extent makes up for the relatively poor insulation provided by the envelope. Overheating is mitigated by the installation of thermal curtains, both behind the external skin and inside the apartments.

The fully-glazed curtain wall, which is self-supporting yet smooth, resolves all the problems associated with weather-proofing and preventing the build-up of dirt.

The amount of natural lighting is not reduced since the steel facade sections used have a particularly slim profile.

The double skin provides excellent insulation from outside noise.

The double skin provides a definitive solution to the problems caused by pigeons.

The transparency of the curtain wall reveals, and indeed augments, the contours and profiles of the building, retaining the unencumbered architectural design.

All the construction work is performed from the outside, with no disruption for the occupants, nor restrictions on the progress with the work.

The volume available within the double skin facilitates the installation of a ventilation system with heat recovery. The supply-extraction units can easily be accomodated in the conservatory areas.

The cost of this solution is within the limits set by the state funding for the work.

In line with the aims of the project, the occupants are encouraged to paint the external concrete facing of their home. They can choose any colour for this paint, and for their thermal curtains or they can selected from the colour scheme put together by the painter Georges Meurant[2]. They are also free to adorn their new living space with plants, furniture or any other object of personal expression. The result could be a colorful band of vertical housing, as seen in numerous cities around the world: Valparaiso in Chili, Cinque Terre in Italy or Tirana in Albania.

However, the intention is not to ignore the past completely. On the contrary, the existing contours and profile, uniform yet complex, are showcased by the transparency of the new facade. The interplay of shadows from the facade’s various concrete elements (columns, lintels, flat panels, string courses and recessed joints) are magnified, as though projected at a larger scale, by the shadows cast by the new floors.

The project is designed to deliver over the long-term and to secure the investment for the future. Consequently, if energy performance requirements become more demanding in the future, it will be straightforward to replace the existing facade with a new and more efficient one, e.g. a passive facade, capitalising on the entirety of the current work.

Care has been taken to ensure that, in all respects, the additions to the construction conform with the applicable fire safety regulations.

The structure of the suspended facade  is made of steel with a high elastic limit, such that the stress on the material does not reach 1/20th of the elastic limit. Under these conditions, no firestop protection is required for the hangers.

The glazed aprons must have a fire-resistance rating of E60 over a height of one metre. This level of performance is simply achieved by double glazing consisting of an 8-mm toughened pane with a heat-reflective coating, and a 66.2 laminated pane, 12 mm thick.

The floor of the conservatory areas must provide two hours of fire resistance (EI 120) while remaining as light as possible. It consists of a single sheet of metal, whose lower face is coated with a rockwool lining, 12-mm thick, finished with a plastered layer to form the ceiling for the level below.