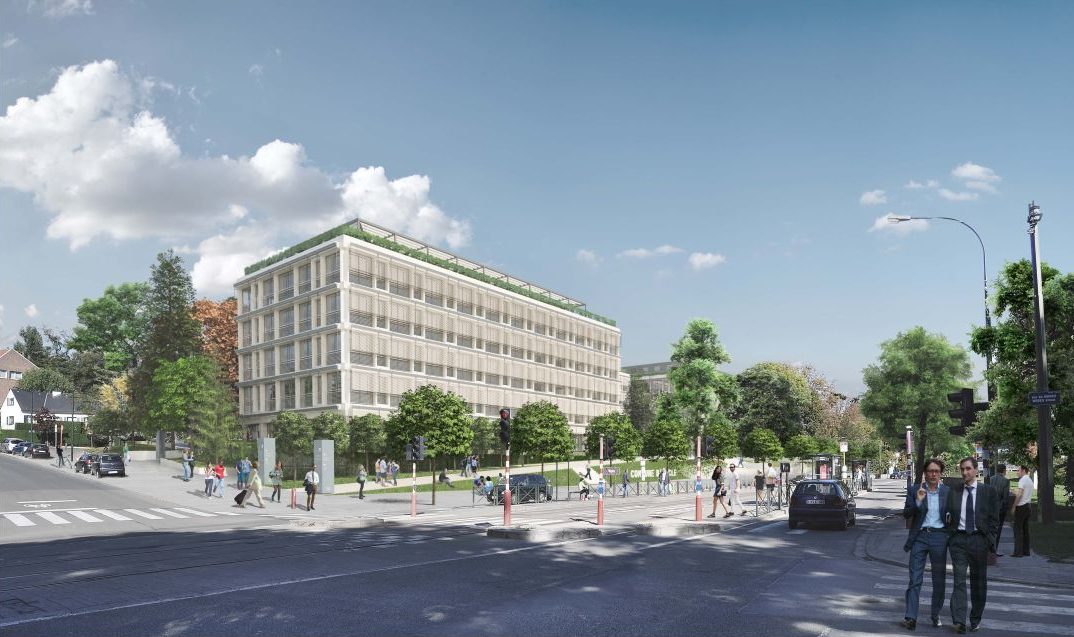 The Municipality made a particularly apt choice when it acquired the ex-Fabricom site to set up its administration. However, the complex nowadays gives the impression of being a set of closed and opaque objects (although glazed) located in a park and accessible through an almost fortified entrance (a “glass fortress”), whereas a modern Municipality like Uccle should be presented in a hospitable and sustainable building, at the service of all, accessible to everyone but in a conscious and carefully regulated way.

All it would take is a fairly limited operation, given the age of the premises, to achieve such a change in the messages that the building is called upon to convey:

– The Municipality serves its citizens: visitors are mainly catered for on the ground floor.

– The Municipality is open and accessible: the buildings are transparent, while the layout of the premises and the traffic are immediately obvious, and the project succeeds in catering for the requirements of people with reduced mobility.

– The Municipality is part of the city: the main entrance is preceded by a forecourt with an urban square atmosphere.

– The Municipality is a reassuring and safe place to work: light crosses the floors, century-old trees soften the atmosphere, calm reigns thanks to a stringent yet discreet access control, the building complies with the relevant safety standards.

– The Municipality is adaptable: a highly flexible use and conception of the floors.

– The Municipality is sustainable: energy consumption is significantly reduced, the focus is on natural materials, occupant comfort (thermal, visual, sound) is a priority.

A bold yet sensitive architectural design

The focus is on transparency, not only for the upper floors (replacement of copper reflective glass with extra clear transparent glass) but also for the ground floor where the entire B wing, the main entrance, is transparent.

The project strictly observes the architectural integrity of the existing building. Work on the exterior is reversible, does not involve demolition and does not damage existing facades. The concrete remains visible and is cleaned using low-impact techniques. Insulation is provided from the inside.

Only one significant operation is applied to the volume: the construction of the council chamber where the present top floor of the A wing is located. Of a larger size (it is a necessity), it nevertheless respects the current building’s lines of vision from the public area.

Natural light is the most valuable resource in an office building.

The amount of sunlight and the availability of daylight varies considerably depending on the facade. Large trees provide plenty of shade but less on the upper floors.

However, sunlight is not the only cause of summer overheating problems, and it is just as important to reduce indoor gains in offices:

– the indoor gains from existing artificial lighting are three times too high but this problem will be solved when the lighting is replaced;

– agreements should be reached with the Municipality’s IT experts on the possible use of thin clients and network printers installed in separate rooms;

– an agreement is needed on the net area per employee, as well as on the number of workstations in relation to the number of officials or visitors. For the typical floor, the density is 15 m² net per person, an intermediate value between a low density (20 m²/person) and a standard density (12 m²/person).

These measures and options can definitely solve part of the overheating problem but more is required. Three complementary measures are proposed:

– on the exposed facades install outdoor venetian blinds that can be raised and turned with high wind resistance, controlled by a centralised control system with possibility of exclusion per room. This configuration allows an average solar factor of 0.11 to be achieved (89% of incident solar energy remains outside);

– remove the current suspended ceilings in all offices and conference rooms to harness the regulating effect of the concrete slab mass;

– use a high-density screed with high thermal conductivity, in which an activation system is used (cooled water coils).

The thermal bridge at the edge of the floor slab is insulated from the inside to protect the present facade’s value as architecture. A vapour-tight insulation layer (XPS) is placed along the facade below and above the floor over the entire height of the edge beams, in line with the frames.

This vertical layer of interior insulation is penetrated by the horizontal floor. A layer of XPS is added to a depth of 1 meter on both the top and bottom sides of the slab. The ribs of the slab, which are trapezoidal in cross-section and low in height, are insulated by means of a prefabricated XPS moulding.

A general active screed provides cool temperatures. It is mainly cold-laden via a cold tank. Convectors embedded in the screed, as well as pre-treatment of the forced air, provide additional heating and cooling. During the heating season, a heat pump (HP) produces 70% of the required heat, aided by a small boiler. The HP draws its energy from a water tank created in the car park and supplied at constant temperature by natural underground water currents.

During the cooling season, the HP extracts cold from the water tank.

Part of the cooling load is handled in free cooling via the dust-free air supply.