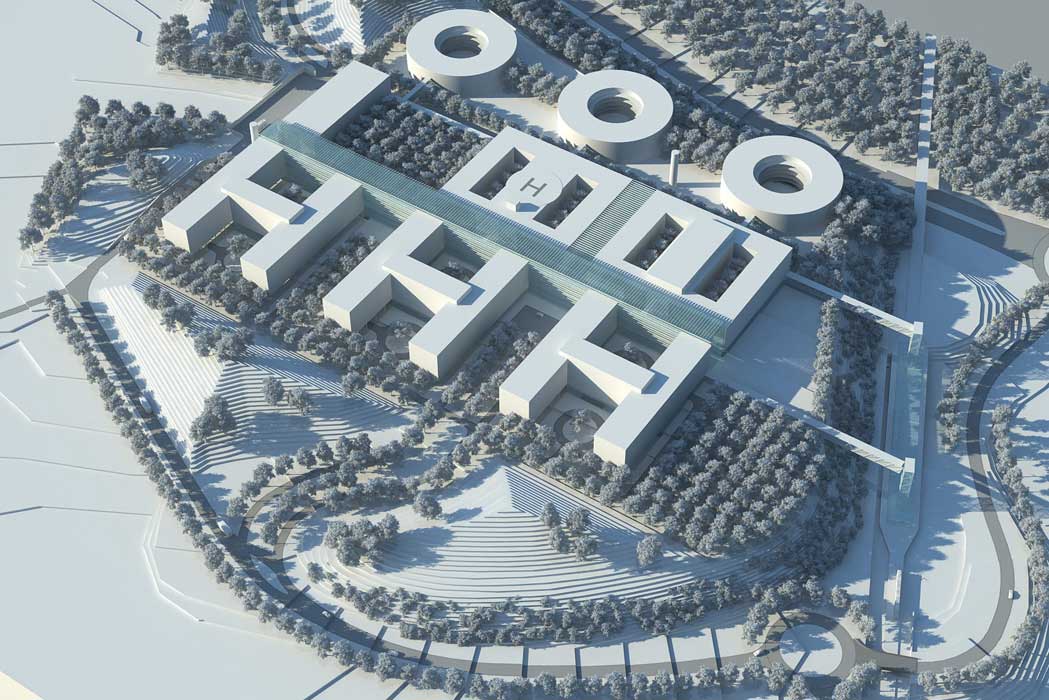 Given the high gradients of the site, the project has to include a major restructuring of the site whilst taking account of the uncertainties linked to the sanitary status of the soil. Based on the available information, all the earthworks can be carried out without any soil disposal or affecting the ground water.

The project is shaped as a ‘hospital village’ placed on a huge horizontal plateau. It is perfectly oriented according to the cardinal axes so as to ensure maximum daylight transmission and a natural protection against solar gain. The overall structure is part of a large quadrilateral.

The ‘hotel’ function is distributed throughout three H-shaped buildings built on piles. Each of them is composed of five levels each with two care units. The large space between the wings provides the patients with an abundant supply of natural light and a pleasant view of the soothing rolling hills and a wide panoramic vista of Charleroi. This comfort is yet another advantage of the general system where patients’ rooms are equipped with an extra bed for the accompanying person: intimacy for the patient, psychological support for the patient, smooth communication between the nursing staff and the families, a lower risk of cross-infection between patients, fewer transfers, a higher room occupation rate due to better patient compatibility,  less use of examination rooms, etc.

The zones filled with protected varieties of trees (non-deciduous Austrian pines) are mainly located in the northern and western zones of the site. They are preserved and separated from the dwellings bordering the new complex.

The plant architecture completes the overall composition. Lines of high-stem trees guide motorists between the mounds of recycled soil filled with groups of trees in free-form arrangements.

This calm atmosphere is enhanced by the dominating south-eastern winds which “chase” the noise on the northern and eastern roads and motorways far away from the buildings. The site remains a place for walks in an area of high landscape value and the “Sentier des Terrils” (Slagheaps’ Trail – GR 412 – GR = a long-distance hiking trail) is preserved as well at its views.

A large covered pedestrian street goes through the village from East to West. In the southern zone, it distributes all of the hotel functions and in the northern zone, the outpatient’s hospital, the hot-floor and the logistic zone. Providing an authentic urban tour, the street forms a transition between spaces on different scales and of different types: wooded patios, footbridges, esplanades, shadowed or lightened zones, resting or shopping areas, refreshment areas, playgrounds for children, etc. The logistical underground corridor follows the exact same path and acts as a dividing line between private and public traffic.

In the North, between the village and the highroad, three multi-storey car parks offer a total of 1 842 parking spaces all protected from the rain, with natural light and ventilation.

Pedestrians reach the covered street via a public square located in the East and overlooking the future metro station to which it will provide access. A trail also connects the RAVeL greenway to this esplanade.

In the South, another square welcomes visitors arriving by car. As for the north-western and southern entrances, they are connected to the Sentier de la Ferme and Rue de l’Observatoire for pedestrians, cyclists and firemen fire services.

Flexibility of the hospital’s organization

The depth of all the buildings is calculated so as to allow most premises to enjoy natural ventilation and light: the care units or the outpatient’s hospital, a part of the hot-floor or of the logistics and production zones. Artificial lighting has indeed a huge impact on the energy balance.

The structure is built in an entirely modular and repetitive manner, whilst seeking to strike the best balance between the span and the cost of the floors. This modularity guarantees a high degree of flexibility for any modification of the partition. In the timetable, the layout proposed includes extension zones (or for renewal on a long term basis) in the northern part of the main street for the outpatient’s hospital, for the hot-floor and/or the logistic and production zone so as to allow works to be achieved with no damage to the general infrastructure and no constraints for the use of the existing buildings. In the South, the extension of the care units is also planned for complementary services to be installed without diminishing the quality of the prospects.

The highest level of standardization is sought for the materials and equipment. Indeed, the quality of life in the buildings is highly dependent on the quality of the spaces.

The division of the functions within the separated and autonomous structures allows an efficient management of the different life cycles for each structure. It also generates a clear and differentiated distribution of the traffic patterns (patients, visitors, hospital staff and logistics).

The demand for care provision  as well as the medical approaches and technologies is developing  faster than the financial and technical capacities to cater for the hospital renovation requirements. Financial means have also a general tendency to diminish. This is why flexibility and cost-effectiveness should become part of the genetic make-up of a hospital “layers” concept. In such a model, the size and the location of each function are rationalized so as to allow future needs-based transformations to be as cheap as possible.

The power installation adjoins the logistical corridor. It is located in the centre of the village just south of the hot-floor which is the most intensive energy user. This central position results in an optimum lengths and sections of the distribution system as well as a comfortable access from the logistical corridor in case of the assembly and replacement of the equipment. This concentration of the power installation has other advantages such as the ability to apply a coincidence factor to the global power needs, to limit the costs implied by the redundancy of power-producing equipment and to improve the possibilities for recovering heat and cold between the different systems.

The air-handling units are distributed regularly so as to keep the air duct run down to the strict minimum.