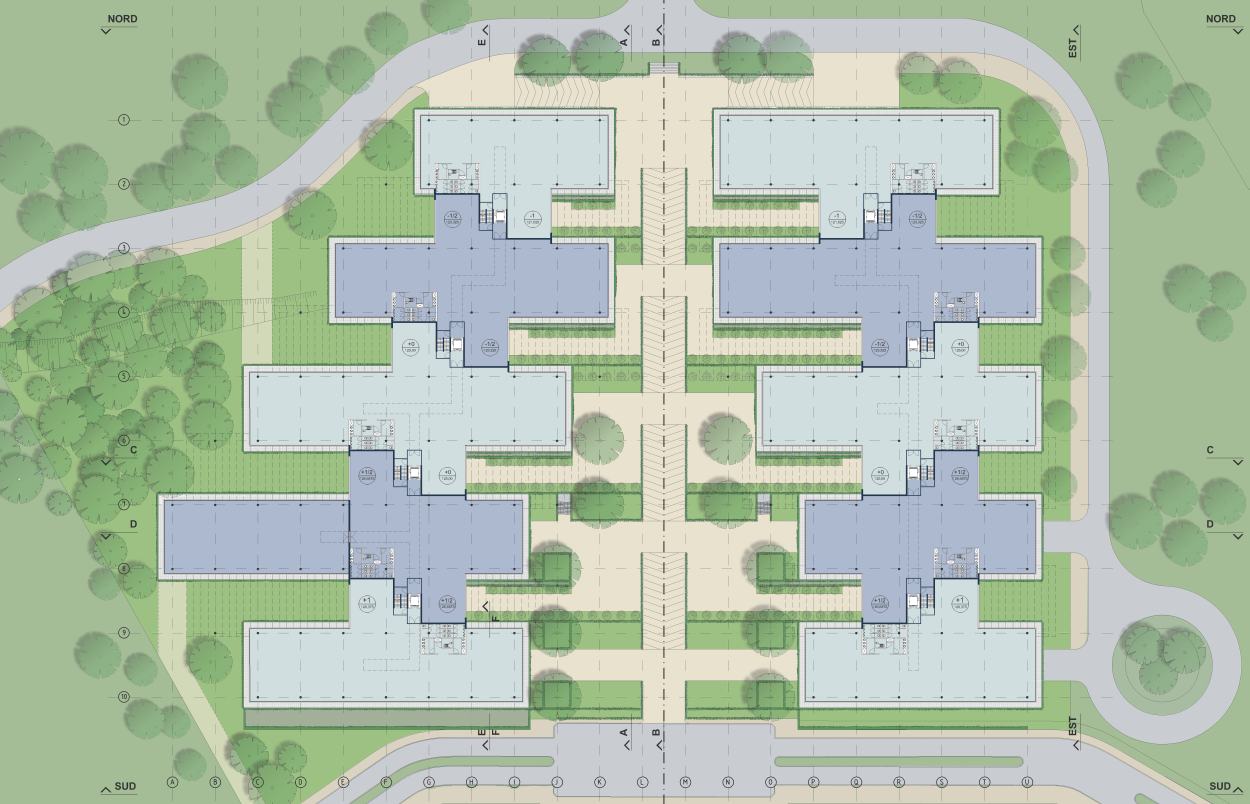 The lot is located in the midst of the Parc de l’Alliance (+/- 10 ha) in Braine l’Alleud.  It is bounded by Avenue de Suède, Avenue de Finlande and Place d’Italie. From north to south the level changes by eight metres.

The programme calls for two office buildings with total above-ground floor space of 20,000 square metres that can be divided in separate rental units with a minimum surface area of 400 square metres.

The main axis of the site lies north-east/south-west.

Exposure north/south of the main facades of an office building is known to be more energy efficient than an east/west exposure, and the sun heat gain in the afternoon is harder to manage than in the early morning.

Consequently, all else being equal, it is preferable to construct the main facades of buildings perpendicular to the main axis of the site, and therefore parallel to the contour lines.

THE NUMBER OF LEVELS

Constructing the development to meet the criteria of a “low building” in the meaning of the Belgian Royal Decree of 19 December 1997 is preferable. This means that the last useful level must be less than 10 metres from the entrance level, an arrangement that allows for greater simplicity of design, lower cost of construction and, particularly, great flexibility in the use of the building.

Using the lower level for parking lots and service/fire trucks access automatically limits the building to three levels (this is also preferable for its integration into the site).  Along the same line of thought, limiting the building to two levels would provide additional savings and flexibility.  Particularly, this would mean that the entire development could be considered as a duplex, with glazed windows over the whole useful height of 2.7 metres, (which gives, with a storey height of 3.375 metres, a spandrel of 0.675 m, rather than one metre between different compartments).

The study of the massing of the site in relation with the parkings, and the fire trucks/service vehicles roads, leads to the conclusion that five parallel “strips” on either side of the main axis and perpendicular to it, is the best solution.

The divisibility desired for each floor on one hand, and a study of the needed office areas on the other, show that there is no need for more than 700 to 900 m² on a single level and that connections by a half level between the major units could facilitate transit and modularity of the entire development.

Consequently, it is chosen to accompany gradually the slope of the site, in 5 split levels.  This layout also reduces the distance of access to archives in the attic to half a level. The attic also contains the technical premises.
Each of the building strips has a total width of 14.175 m (equivalent to 14 m at the glazing) and a variable length to allow for flexibility in the premises offered for rent.

The strips are connected by 4 units, 22.275 m deep. These units contain the vertical circulation shafts.  They are divided in two parts, each a half-level from the other – but at the same level of the wing it borders. The result is a large central area, as desired by the client. The width of these connecting units can be increased or reduced to ajust the size of the central zone as may be preferred.  Consequently, the ratio of 14 m / 20 m depth can be modulated.

This design allows for great flexibility of organization : from small units each having private access, to large units of 10,000 m² or two intermediary units of 5000 m². As an alternative in the last case, the main halls can be broadened in the parking areas.

The building development includes a ground floor plus two stories, so that it will be perceived as a pedestal not comparable, but complementary to the existing buildings.  Existing buildings will also continue to enjoy a clear view.

A “sustainable development” approach includes limiting energy consumption and respect of the site, among other things.

Underground car parks represent very large investments in structural work and expensive earthwork, they are relatively disrespectful of the environment and require investments in mechanical ventilation and possibly sprinklers, as well as recurrent operating expenses.

The 568 parking places are therefore located under the buildings, and ventilated and lit naturally.

An ivy-covered, metal mesh screen hides the cars from view and allows security to be organized unit by unit.  The supporting walls against the earth are planned in geotextile.

The car parks are organized in strips 16 metres wide perpendicular to the main axis.  This system allows for natural lateral acces of the five strips, and access of fire and service vehicles between them, on the intermediary landscaped aisles.  The landscaped aisles gradually compensate the differences in level, adding a rythm to the central public area perpendicular to the main axis.

The fit into the lot makes execution in phases easy to do.

Light coloured wood frames are used for the glazed facades, which are also protected from the rain by light shelves.
The sills along the floors can be made of reflecting glass or sheet steel lacquered glossy black or grey.
Small windows above the light shelves allow for free-cooling.
Full blond wood panels can also be used to replace the door windows where needed.
The louvers in the technical premises, protected from rain, are also in wood.

The two levels of offices are equipped with balconies. In addition to the pleasure they give the occupants, they can also be used as an emergency escape route and are helpful in climate control. The balconies and railings are in galvanized steel.

The floors are borne by two peripheral beams on supports 8.1 m apart (except in special cases where the distance is 5.4 m, at the corners, for example). A slab 27 cm thick plus a compression surface of 6 cm for a total of 33 cm is sufficient.