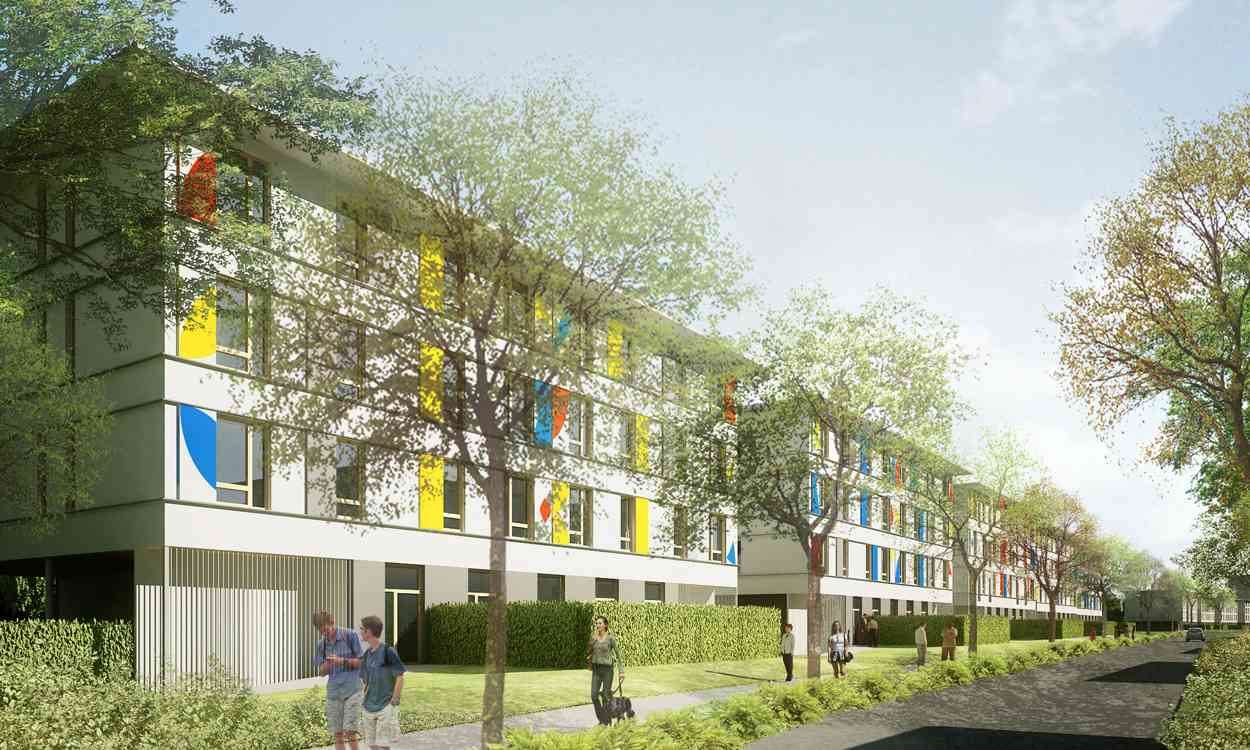 546-378 Residential units for the Brussels CPAS

The project concerns a residential complex of 378 units of varying sizes spread over three sites (North, East and West) along Rue Bruyn, an avenue with a moderate volume of traffic.

Integration of the buildings in the urban environment

The layout of the structures accentuates the building line of the roadway and at regular intervals incorporates views and semi-private accesses towards the park to the west and the “Nos Pilifs” farm to the east. The three sites are treated as a single whole integrated into its environment, both as regards the heights (three-storey blocks of flats, single-storey detached houses and a few seven-storey stand-out blocks) and as regards their site coverage (each block is of a small size and the houses are in groups of six at most).

To the west of Rue Bruyn, the paths between the three-storey blocks of flats with a roadway frontage form semi-private enclosures leading to the houses with a North-South orientation.

These enclosures, which are used as playground areas, give access to all the parking places and lead towards the public park.

In the three-storey blocks of flats, the bedrooms are arranged on the east side (the street side, which is quiet at night) and the living areas on the west side with a view over the park (protected from the noise of the street during the day). This configuration is ideal in terms of the rooms getting a lot of sun.

The houses are sheltered acoustically by the blocks of flats, and enjoy an ample south-facing aspect with their gardens.

A landscaped acoustic screen has been arranged at the North of the site to insulate it against the noise from Avenue de Tyras.

This building layout is also optimal with a view to benefiting from the prevailing south-westerly winds in summer and affording protection against the cold north-easterly winds in winter.

On the East site, the three-storey and seven-storey blocks of flats could have their bedrooms facing the north and their living rooms facing the south, by way of a variant.

The enclosures of this area lead towards the “Nos Pilifs” site.

The range of different types of volumes built naturally guarantees the social mix. The requested programme breakdown between housing types is rigorously respected, with three-bedroom and four-bedroom homes mainly being provided for in the houses, and the blocks of flats being reserved for two-bedroom flats on the upper floors and one-bedroom or studio-type flats on the ground floor.

Provision is also made for premises for commercial use to the north of the West site and a crèche to the south of the East site.

The green esplanade that drains the North site forks near the West site towards the East site, and from there leads, between two little seven-storey towers, to the “Nos Pilifs” estate.

The parking places are arranged in the private estate. Most of them are single-storey, with natural ventilation and lighting.

The car parks of the apartment buildings surrounding the North site’s “marketplace” are the only ones laid out in the basement with direct access to the buildings. However, they also enjoy natural ventilation and lighting thanks to gardens, English courtyards and areaways opening out under the benches lining the “marketplace”.

Observance of the town planning and safety standards

The project was subject to an internal audit by the study team in accordance with its ISO 9001 & 14001 procedures. Great care was taken to ensure strict compliance with the rules and regulations in force, as well as the quality charters and codes of good practice.

The choice of a low height for the buildings, something naturally suggested by user-friendliness, results in all the structures being of the “low building” type (except the average seven-storey apartment blocks), which reduces the costs associated with fire prevention to an absolute minimum.

The hierarchical system adopted for the exterior and communal areas enables a clear organisation of the anti-burglary security systems.

Aesthetic quality of the buildings

The layout of the built volumes, which are treated with sobriety and restraint, in relation to the way the areas around them are treated, constitutes the basic element in the composition. The same applies to the living rooms’ large cavity terraces (alternating floor by floor in order to guarantee effective continuity of the thermal jacket), overhanging roofs and continuous guttering, which protect the outer walls from damp and form guides for the shutters.

A regular distribution of the vertical façade openings is proposed. The continuous surface areas are in a clear, neutral shade set off by the polychromy of the shutters. The latter constitutes an artistic project in itself by the hand of Leon Wuidar, totally in keeping with the age-old traditions in that it expresses a story yet to be written. To this end it is necessary to take the concept of “patchwork” further[1].

Aesthetic quality of the apartments and houses

The search for compactness of the housing aims to limit the construction and operating costs and goes hand in hand with a spatial organisation attentive to the proportion of the spaces and the distribution of natural light.

The living areas are placed on the front-wall side and the communal stairs and landings, which are given overhead lighting, are arranged at the heart of the building and afford the central areas of the apartments extended daylight.

More than half of these have a third south-facing or north-facing façade.

Special attention is given to the treatment of the large terraces of the west-facing living rooms, which are included in the building volume and afford protection against the rain, sun and noise. With the supplementary windows on the outer walls, they create a light environment and a surprising feeling of space. On the other hand they are out of line floor by floor such as to provide a perfect thermal continuity of the building, the façade “folding back” at the ceiling and at the floor without a solution of continuity.

More than a third of the houses also have a third façade. They either face east towards a garden, or west towards the park in respect of the North site.

User-friendly nature of the layout

The exterior areas are organised in a hierarchy from public to semi-public and from private to semi-private.

The semi-public areas of the project link up with the public areas and the surrounding parks.

The recreational and social activity in the enclosures encourages the feeling of security and belonging for the residents and their children.

The layouts of public, semi-public and semi-private gardens are organised in such a way as to answer to each other, in the spirit of the “garden cities” of Watermael-Boitsfort.

A large glass roof covers the buildings’ vertical circulation halls so that they are flooded with natural light. The halls’ plentiful light provides the centre of the apartments with extended daylight by means of small fire-arresting and acoustic glazed internal window frames.

The inner walls of the halls, in light shades, are also sound absorbent.

Lift walls and ceilings are glazed to increase the feeling of comfort and security.

All the car parks are afforded natural lighting and ventilation, including the large complex in the basement under the marketplace, with their gardens with English courtyard that enhance user-friendliness and security and increase energy savings.

The “marketplace” on the North site is a large area of conviviality. Housing a crèche and lined with convenience stores, it is also accessible for pedestrians walking through the site. Covered galleries accentuate the common character of this part of the complex with a greater building density.

The East and West sites are also flanked by an area with convenience stores to the north-west and a crèche to the south-east.

The choice of materials will stem from the detailed technical studies of the project in interaction with the choice of construction components and the level of performance to be attained that is deemed adequate.

The objectives targeted by this process are as follows:

That said, the buildings are provided with a calcium-silicate bearing masonry with insulating material and a thin rendering. The spans of the reinforced concrete floors are limited to what is strictly necessary. The study of the jacket and its insulation level will be the subject of a study planned with all the intervening parties, and the choice of its material should remain very open at the stage of this preliminary design so as to enable the comments and suggestions still to be made by the partners to be incorporated. What can be said about a hydraulic rendering, flame-retardant wooden or fibre cement panels, or even profile sheeting or cassette panels?

The casements are in wood and their surface areas limited to what is strictly necessary, not only to reduce heat loss but also so that their stiffness enables maximum airtightness. They are all fitted with exterior sun screens and shutters.

What can be said about the dilemma presented by the windows: should the choice go to a type of glass with a very high thermal efficiency but which corrupts the colours, or conversely to crystal-clear glass that offers lower insulation properties but is so much more respectful of the senses?

The high-insulation multicoloured shutters are made of high pressure laminate panels or lacquered steel cassette panels stiffened by the insulating material for ease of maintenance and durability over time, and also for their structural stiffness making it possible to guarantee good airtightness.

The overhanging roofs are in metal on account of their longevity and ease of maintenance.

The technical facilities will be studied and laid out in such a way as to limit openings and chases in the walls and partition walling and the base of the flooring, to what is absolutely necessary, and to attempt to do without screed, whilst still guaranteeing the desired soundproofing.

Polychromy of the shutters: Leon Wuidar

Competition further to invitation, ranked second for the North site.

[1] See on this subject: BULLETIN DE LA CLASSE DES BEAUX ARTS. Belgian Royal Academy of Science, Letters and the Arts – 6th series, volume XVII 2006 7/12, pp. 323-353; Ph. Samyn, “The virtues of patchwork and the façade of the Council of the European Union”.

546-378 Residential units for the Brussels CPASThursday, May 8, 2014Filippo Aimo