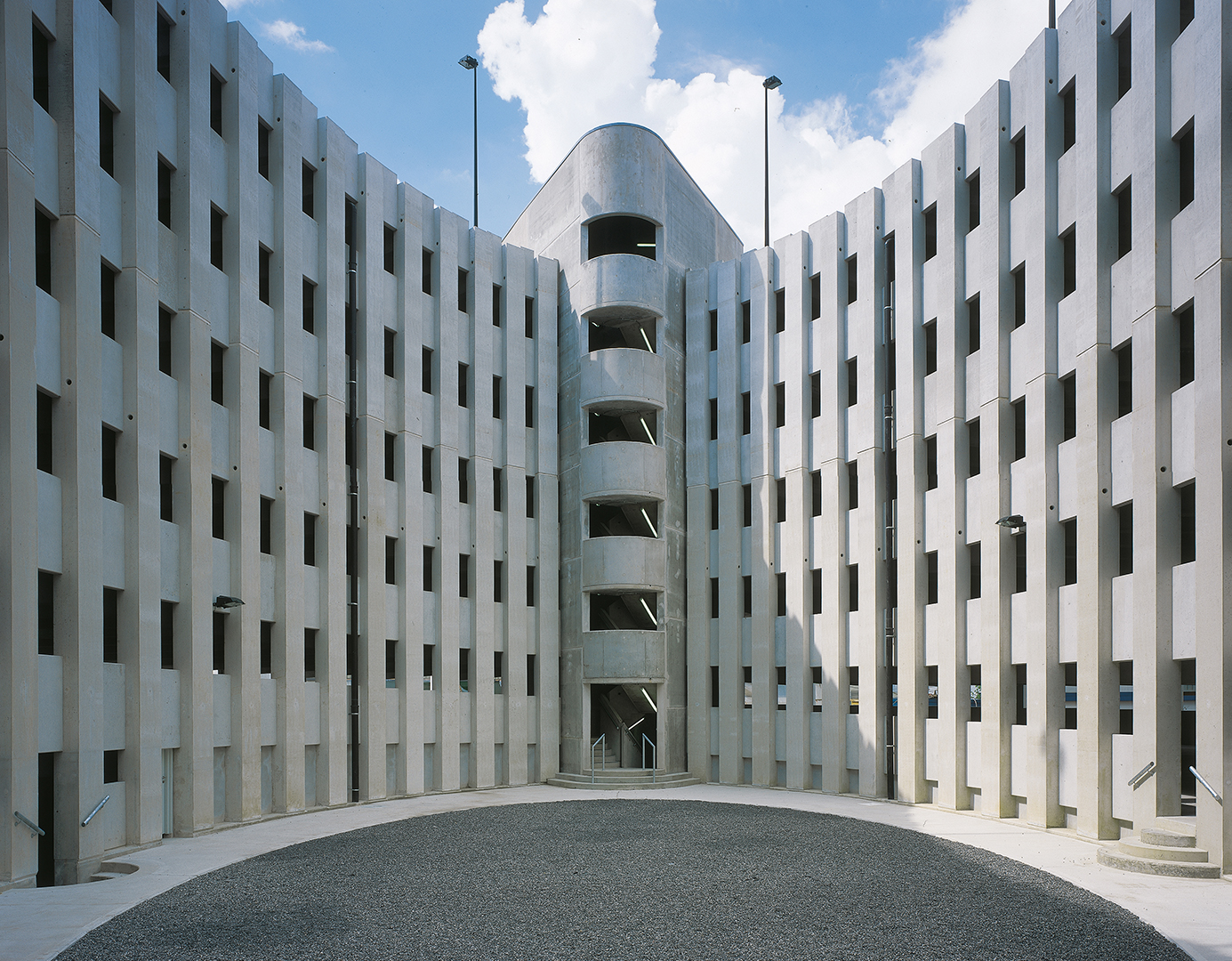 The project for this building is part of a more extensive plan to redevelop the entire site where the SmithKline Beecham Company has established and expanded its operations. The area is planned to be rationalized through the construction of new buildings and the study of new paths as well as lanscaping designed to segregate the traffic and block off or enhance certain views.

Located in a valley alongside the river Lasne, the site is characterized by a soil with poor load-bearing capacity. In the first study, the design comprised three parking levels below ground, and five levels above ground. The foundation wall, in the shape of an oval,  was to naturally retain the surrounding soil. Its technology was choosen to suppress the need of shoring during the construction. The whole was to be built on a concrete slab acting as a stopper, the resulting upleft pressure being counterbalanced by the load of the open-air levels.

Though the underground levels were suppressed at later stages of the studies to minimize site inconvieniencies during construction, the oval shape was kept due to its harmonious integration in the surroundings. The parking is located at the meeting of the two different regulatory grids of the administrative and production facilities ; its oval shape organises the transition from the one to the other, while fitting between the other constructions.

Due to the poor load-bearing capacity of the soil, the constuction is now built on 16.00 meter deep piles and comprises six levels above ground and ¼ level below ground.

Access towards site landmarks are located on each axis of the building : the car entrance to the East, a walkway between two major buildings to the West, and pedestrian exits to the North and South.

A systematic study of different parking types demonstrated that single continuous sloping facilities are more economical than the ones consisting of separate levels connected by ramps.

Furthermore, it carries the following advantages :

A continuously rising oval slab, with 15 radius and a constant width of 16.00 metres allowing cross circulation in the middle (7.00 m) and parking spaces on both sides (2 x 4.50 m), best combines the above advantages. Its long and short axis are respectively 64.00m and 48.00m long. Each floor element is laid 4.5cm higher than its predecessor, adding to a 2.70m level difference on a full ellipse (60 x 4.5cm). The slope at the center of the span reaches 2 %, which is very confortable for both cars and pedestrians. The 6 ¼ levels accomodate a total of 624 parking spaces.

The entire structure and all the external features are made of reinforced concrete. The following prefabricated elements are part of the composition :

Some parts have been smoothed over and painted, while others are left rough.

The central void provides natural ventilation and lighting, which allows to decrease energy use and costs. Two emergency staircases, located at both ends of the long axis in the central void, open onto it to benefit from the natural ventilation and the views it provides. Along with elevators and technical shafts, they are part of two vertical circulation cores, whose height was limited to a bare minimum by the use of elevators without machine rooms. An elliptic central gravel courtyard, bordered by a concrete sidewalk, distributes the four exits at ground level.

On the top level, the concrete floor is covered by a waterproof bituminous covering. Six cross gutters on the top floor, and one cross gutter on each covered floor, collect the rain and the water retained by car wheels, which is further lead to a petrol intercepting chamber.

Eight lighting masts shed their light on the top level, while the covered levels are lit by neon tubes protected by the ribs of the T slabs. All devices are controled by a light probe to optimize energy-use.