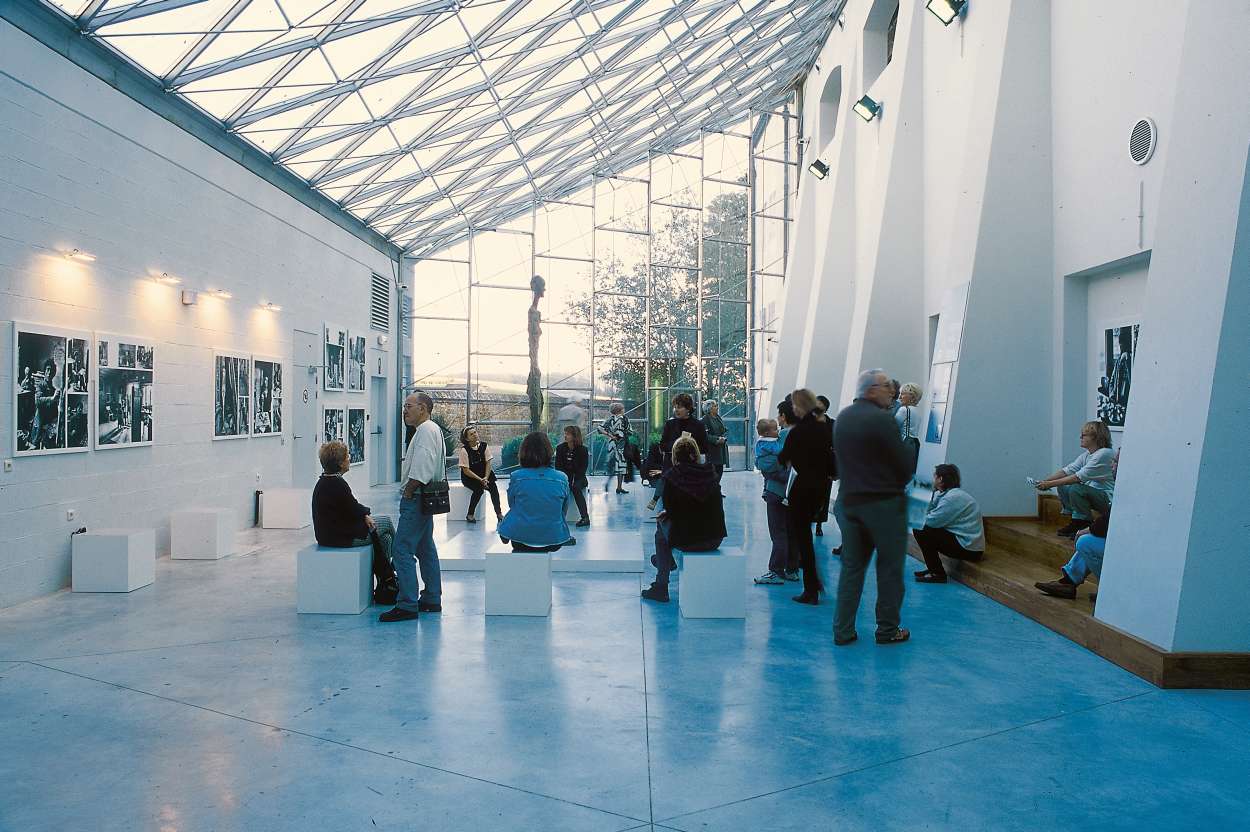 329-Orangery of the Seneffe Castle

The Orangery of the Seneffe Castle was erected around 1779. After renovation, the building has become a reception place functioning not only as a cafeteria, but also as a theatre or cinema, as a reception room and as an exhibition centre. It can be rented out to particulars for receptions. This new function requires a service area for meals, sanitary facilities and vertical circulations.
The multiplicity of uses implies that all those areas can be adapted to the various activities and the different flows of people. Before restructuring, the whole essentially encompassed the Orangery, a large vaulted room measuring 9,00 m x 37,00 m intra-muros. It is surrounded by a peripheral gallery on the west side (1,10 m wide) and a rear galery in the north (1,92 m wide). The latter consists in three levels added by the Ministry of Public Works in 1979. A larger peripheral area on the east side (5,40 m x 11,8 m) has also been provided with three levels the same year. Also included are more loft spaces and a series of three genuine arched cellars located under the three western bays.

The aim of the project is to provide for a maximum use of the volume of the Orangery without disrupting its majesty. Flexibility of use is to result from the location of all service spaces in the existing peripheral areas and from the addition of a volume built on the north side, accomodating a kitchen, appended rooms and a lobby. The kitchen space and its appended rooms are thus set in the north garden of the Orangery and separated from it by a glazed area housing the lobby. The northern wall is pierced, on the ground floor and on the third level, by large openings between buttresses, dating from 1979, thus connecting these two levels with the lobby.

At the second level, the galleries are fitted out as dressing rooms for artists. The three galleries are accessible by two new staircases located at each end. The stage and the back stage occupy the eastern part of the room when it functions as a theatre. Three-dimensional truss beams set in the space at the loft floor level which is available at the springing line of the vaults, support the stage curtain, the scenery and the lighting. The stage itself, raised by 90 cm, consists of 37 practicable sceneries of 2,00 x 1,00 m. The public is seated in three rows on the same level consisting of 11 seats and 17 rows spaced at 80 cm consisting of foldaway tiers.

The west side of the central space is used as a projection room. The structure of the eastern span is redisigned in order to house the sanitary cores and the main vertical circulations as well as a second projection room, if necessary. The loft space contains a large meeting room. It is accessible by a panoramic elevator and the main stairway, as well by two emergency stairs. Mechanical rooms are set at the ends of the loft space. The boiler room is set in the eastern part to make use of the existing chimney, whereas the western part houses the rooms for air treatment. The first three western spans of the vaulted cellar, accessible from outside, are used to store the scenography elements which can be dismantled. The cellar under the eastern span encompasses the elevator pit and mechanical rooms.

Freed from any circulation, sanitary or servicing spaces, the large room of the Orangery is entirely destined for staging spectacles or receptions. The Orangery, fitted out and transformed, offers a flexible modulated space which permits the organization of a wide range of cultural activities or festivities. The open space of the large room is favoured by the practical layout of its appended rooms. This enables not only to optimize the space but also to separate the events from their preparations, leaving the organization of service areas and served spaces independent from each other.