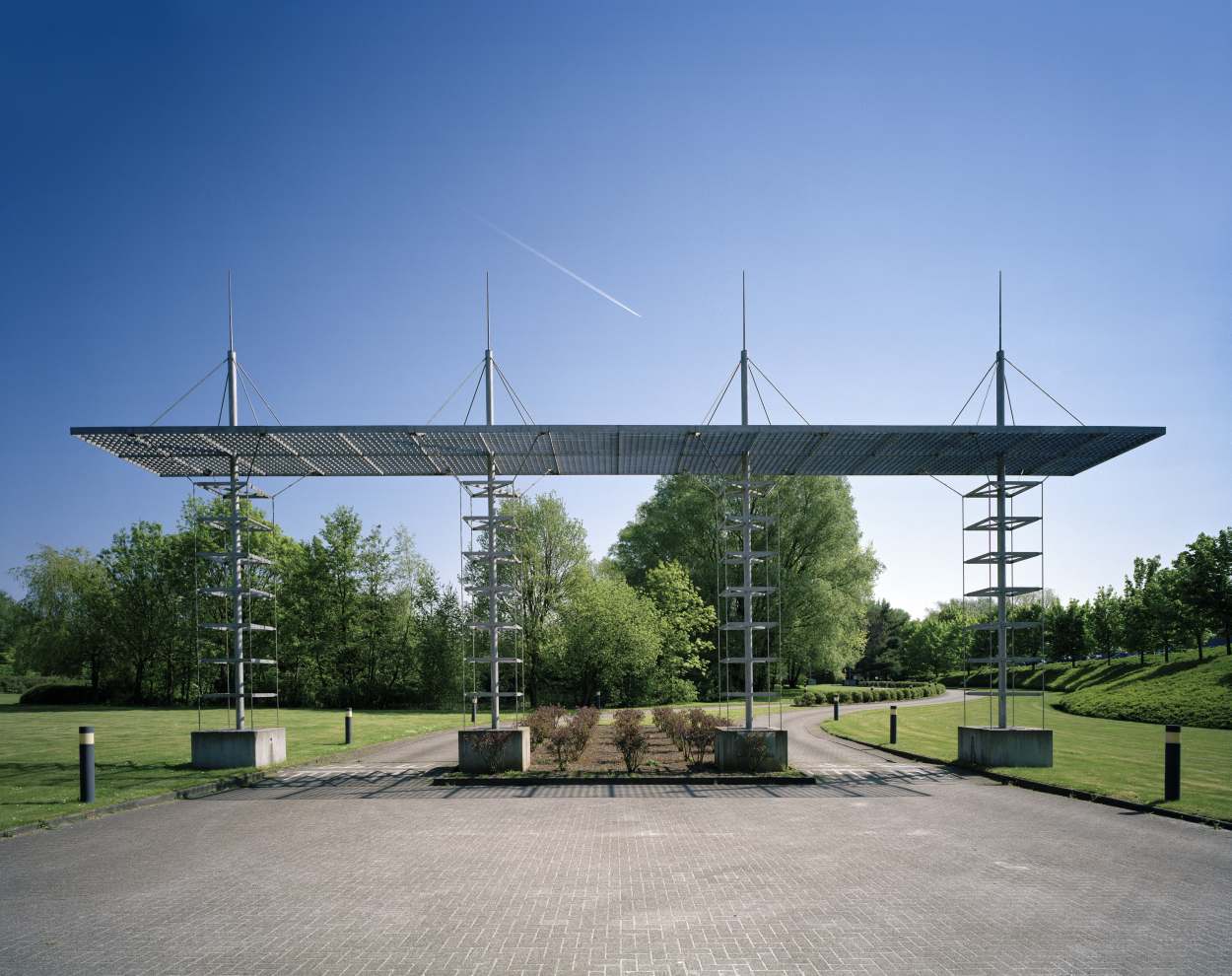 The research centre and the landscape

Wishing to implant a work of art in the park surrounding the research center that they are erecting in the scientific park of Louvain-la-neuve, the NISSAN EUROPEAN TECHNOLOGY CENTRE (BRUSSELS) company, with its global approach to situations and constant care for integration, decided to commission its conception to Samyn and Partners, architects and engineers of the building.

Issued from a reflection on keywords defined in agreement with the client, the project materializes itself into two successive porticoes that define the spatial entrance sequence to the site. This option concentrates into the two independent objects all the preciousness that was voluntarily kept away from the more sober building.

Set on two reinforced concrete column bases acting as foundation and sheltering the upwards lighting, each portico is composed of the following stainless steel elements :
– masts made of a circular tube ;
– rings, made of square plates lined up on the mast ;
in time, banners engraved with scriptures relating the history of the company can be attached to them ;
– threads, made of fine rods, suspending the rings and windbracing the whole structure ;
– the roof, made of duckboards, carried by the masts and stabilized by the threads.

History presents numerous building examples pushing constructive possibilities to such a limit that the durability of the construction becomes smaller than the permanence of the ideas that it symbolizes. One thinks of Gothic cathedrals, regularly collapsed and rebuilt, or Shintoists temples, rebuild every fifty years.

Some materials are more suitable than others to embody this ” ephemeral ” permanence. Steel and other metals, plastic, glass, are light materials. They work mainly in traction and/or in bending, which makes them especially suitable for mobile and ephemeral structures. It is for this reason that the automobile construction industry (i.e., fundamentally, the mobile construction industry) makes an intensive use of it.

Those materials represent the permanence of ideas, borne by ephemeral objects.

The shape and the meaning : the square car

The portico is a rich archetype. Meanings that it has carried in history are numerous :
– war and power (the triumphal arch),
– peace (Saint-Louis’ arch, Missouri),
– prayer (the temple),
– welcoming (the entrance of the castle park).

In all instances, the meaning of the portico is expressed on a large scale by its overall shapes and decorations, and on a small scale by :
– bas-reliefs sculpted on the walls of the triumphal arch,
– sacred texts engraved on the gates of the temple,
– heraldic symbols of the Lord forged in the fence of the castle, etc.

The Nissan portico set themselves in this tradition. Their general meaning comes close to the one of the gate of the castle. In addition, their silhouette being like a light, tense, ideal, effective projection of the massive facade of the building, they symbolizes Research.

On another level, the sculpture-porticoes, at once permanent and ephemeral, place themselves at the junction of the heavy and the light, the building and the car, the inert and the living – a rooted car. The auto-immobile doesn’t move, it symbolizes the permanence of an institution whose mission is to produce ephemeral and mobile cars.

The following aiku can be read on the base of the central mast :
The circle becomes the square.
The sun embraces the sea.
Harmony with nature is the goal.

292-Scultpure of the Nissan Technical Research CenterWednesday, May 21, 2014Filippo Aimo