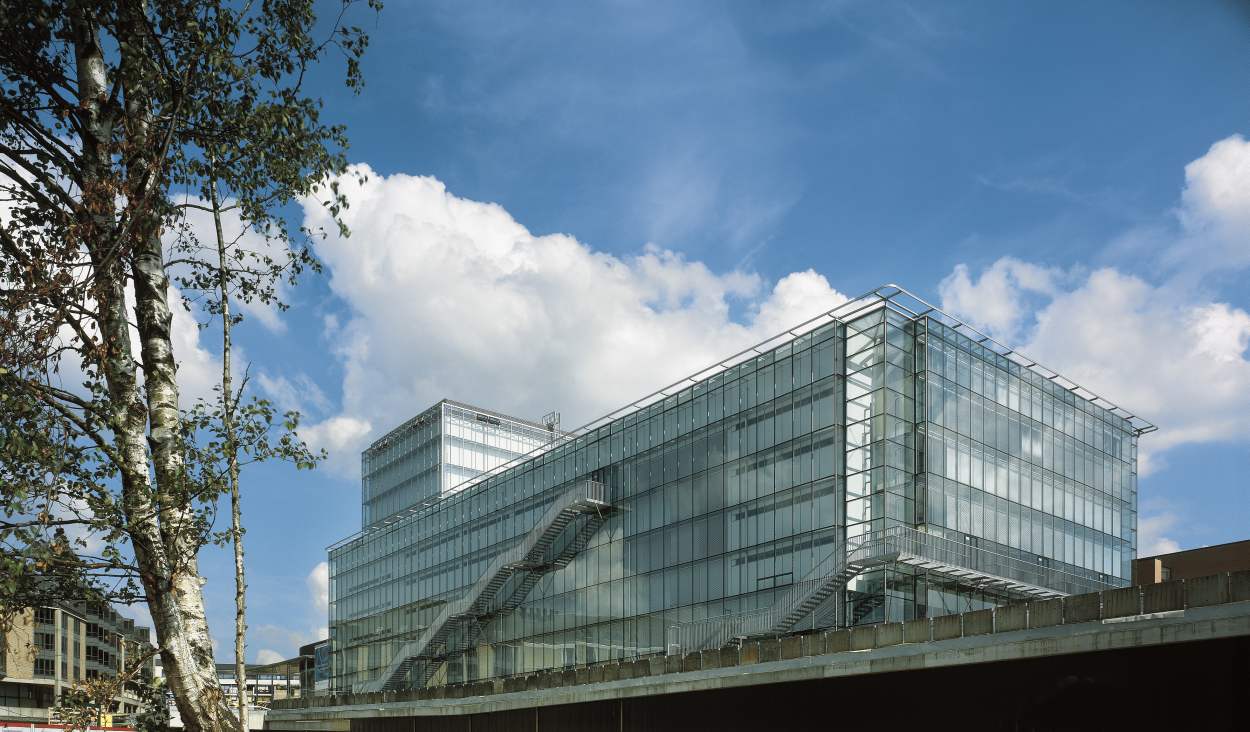 The Aula Magna is located on the site of the Catholic University of Louvain in Louvain-la-Neuve, at the proximity of a lake and the Grand-Place.

Moreover, it must also cater to the greatest possible and desired number of events for the town and region. As a result, various events can be organised such as conventions and conferences, symphony concerts, theatre plays as well as events of a more commercial or entertaining kind with assorted large exhibition spaces.

A limited number of parking spaces is provided underneath the building as well as an unloading area for goods vehicles.

Special attention has been brought to the environmental care, in particular with regard to energy and natural ressources saving, both in terms of energy production for the building as well as for its operation and maintenance.

The Aula Magna scheme is integrated in the urban development plan of the area of Louvain-La-Neuve located between the Rampe du Val on the North, the Thomas More building on the South, the lake on the West and the Grand-Place on the East. This area is commonly referred to, in French, as the «Grand-Place /Lac» (subject of another study : 01/268).

The box-like building is laid out on a rectangular plan (31.5 m by 72 m) including an 8m10 long structural grid, three transversal bays and eight longitudinal bays, surrounded first by a 2m70 large annular zone housing the auditorium balconnies as well as secondary rooms then by a 90 cm deep double skin.
Essentially, it houses :
– a public lobby, on the 112.03m and 110.68m levels (the Grand-Place being at the 113.40m level) extending over the whole building, including access stairs to the auditorium hall and the VIP lobbies;
– an auditorium hall on “pilotis” set over four of the eight bays located above the public lobby, and a stage area on two spans with a scene and an orchestra pit;
– VIP lobbies above the eighth bay, including offices and sanitary facilities;
– two underground levels reserved for the main cloakrooms and public toilets, five large meetings rooms, two restaurants with their kitchens, storage and technicals sapces, as well as parkings;
– an unloading area accessible to lorries on the second underground level, serving the public lobby and the stage via an elevating platform.

Overhanging the whole stage, the 10.80 m high, 24.30 m long and 16.20 m deep box, fitted with footbridges and stairs leading to a technical platform, allows maximum flexibility and efficiency in the management of stage sets.
As the main part of the building, the stage cage is enclosed by a double-skin facade, equipped with maintenance catwalks every 2.70 m.

URBANISATION OF THE GRAND-PLACE LAC AREA

The origin of the new city of Louvain-la-Neuve lies in the division of the Catholic University of Louvain into its two different language entities, the French and the Flemish.

The urban development started in 1972 and has been pursued since across the East-West oriented Malaise valley.

With a scientific park stretching to the Est and South of  the city and a major university, the population of the city counts 15.500 inhabitants, and is planned to grow up to 28.000 inhabitants.

The project commissioned to Samyn and Partners consists in the detailed planning of the West quarter, which stretches from the Grand Place (main square) to the lake. South-East, it is bordered successively from center to periphery by an auditorium complex, the Law department buildings, and a green area behind which lies the residential neighbourhood ” Les Bruyères “.

North-West, it is bordered by the hill flank houses of the ” Hocaille ” residential neighbourhood. In respect with the guidelines of the urban development plan, various functions must be accomodated in the new neighbourhood : housing for 1.500 inhabitants (approximately 60.000 sqm), the Aula Magna, the Museum, a movie theater complex, academic facilities, a hotel, and parking for approximately 500 vehicles. Pedestrian streets and walkways must connect the main square with the lake, and transversally the “Bruyères” and “Hocaille” neighbourhoods. Located between the natural periphery of the city and its raised center, the project must insure the transition between the landscape integrated roads on the oustkirts and the inner underground circulation. The urban morphology must offer both continuity and complementarity with the existing urban fabric.

A main axis drawn between the main square and the lake structures the new neighbourhood. The Aula Magna, a cultural and academic multifunctional hall intended to accomodate theater and music performances as well as major academic events, thus a symbolic and programmatic element of primary importance for the university and the city, is implanted on the main axis. From the main square, it is preceded by a straight covered street bordered on both sides by the two parts of the new Museum. The street leads into a rectangular forecourt dedicated to Baron Lemaire, the spiritual father and original planner of the city.

Through its transparent foyers, the fully glaze building frames the perspective that opens on its opposite side towards the lake and the suburbian greenery. (Both Aula Magna and Museum are also designed by Samyn and Partners)

North-West of the main axis, two open blocks allow a direct circulation between the mineral streetscape and the inner gardens. Their arrangement creates a triangular square that offers a full sideview of the Aula Magna. The block closer to the center hosts residential and community facilities, the second block is residential. In both blocks, the first floor accommodates mixed-use functions. Further North of the new neighbourhood, a rectangular academic building completes the square in front of the Saint-Francis church. At the Western end, a prow shaped building marks the entrance of the city and closes in the incoming traffic.