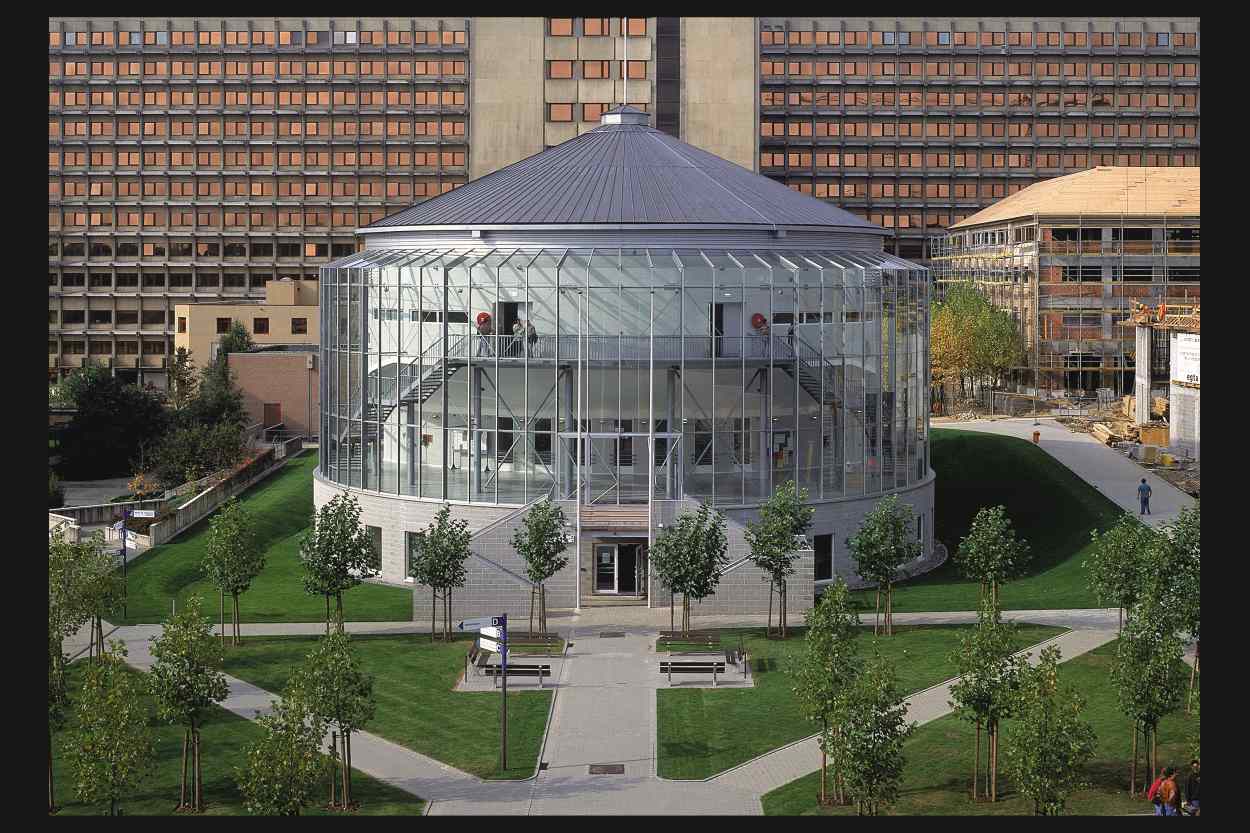 Despite of its average size (about 2.000 sqm. surface area ), the project is of symbolic importance by virtue of the activities which it is designed to house.

Three major objectives influenced its conception :
– to respond in the most complete fashion to varied functional requirements, – to remain within a limited budget,
– to create a building symbolic of its privileged position and meaning on the campus while remaining highly functional.

The circular auditorium, the central space in the building, accommodates within a minimum area 500 seats with optimum visual and acoustic link to the podium. The layout of the seating was, in particular, designed for optimum viewing. The absorbing walls of the cylindrical auditorium and the steep arrangement of the seat rows ensure good acoustic conditions.

A solution to design problems posed by the large size of the auditorium is the S-shaped central corridor which respects strict safety regulations, requiring rows having a maximum of 20 seats, and avoids encroaching on the central seats.

The entrances to the auditorium are designed in chicane form by placing the entrance doors tangential to the walls, making access to the hall both more pleasant and more discrete while filtering out light and sound.

Natural light is an important feature for such a space. Provided by horizontal openings in the auditorium wall, it contributes to the quality of life, and eliminates the feeling of claustrophobia or panic. In addition, exterior views provide the users points of reference in the outside world.

The ventilator blocks are situated in a suspended- ceiling, which facilitates their maintenance. In the auditorium, air extractors are to be found under the seats, in the form of openings placed in the angle of the steps. These are connected to the ducts which return used air to the lower level of the space between the wall of the auditorium and the load bearing structure. Fan-driven air travels through the upper level of this partition.

The auditorium is the core of the design and Its circular form was extended to the rest of the project. The circular form of the lobby creates a hospitable entrance and reception area. The lobby is emblematic of the dual function of the project : simultaneously open to the outside and closed in upon itself. In the basement, the circular organisation lends acoustic, visual and design advantages to the conference rooms, the secretariat and the chairman’s office.