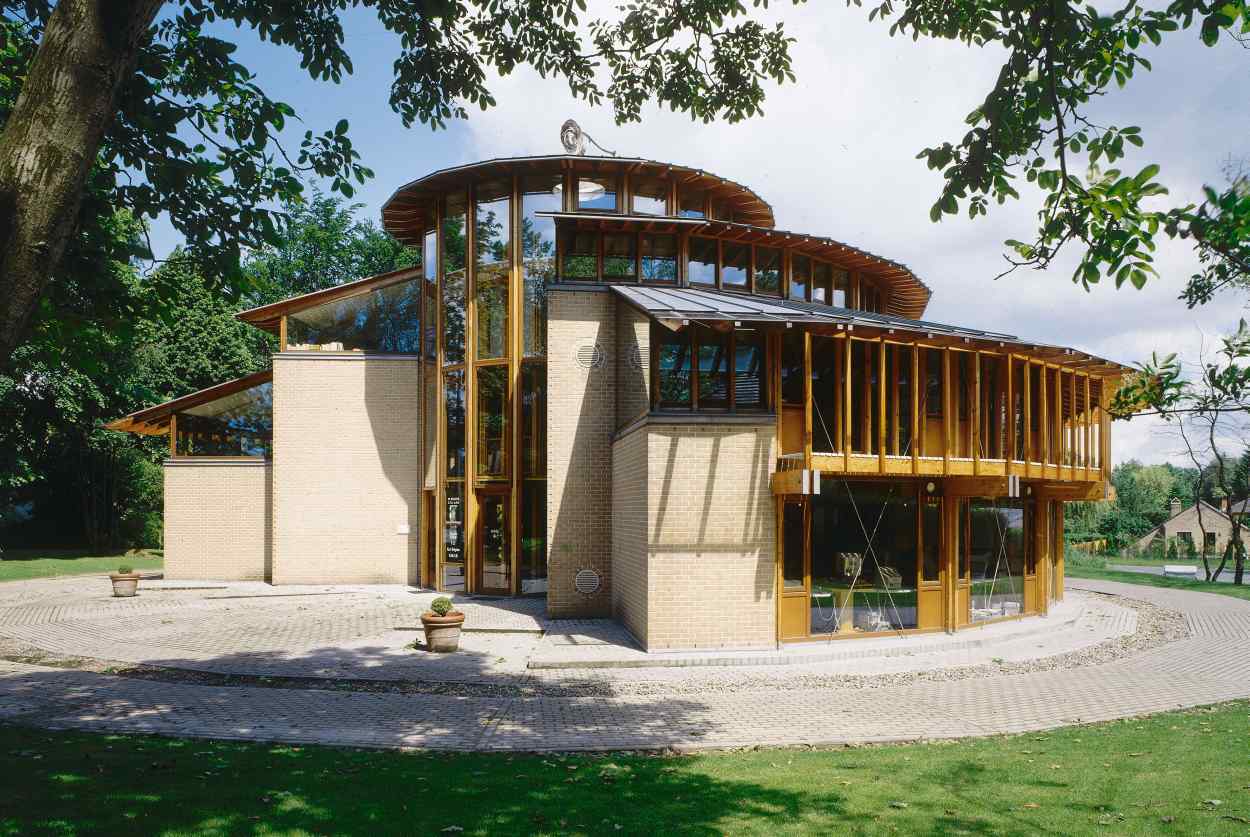 200-An office building for Eric Boulanger

The irregular polygon-shaped site borders a busy suburban road (Chaussée de Waterloo – Brussels). It is situated at the edge of a calm and wooded residential area, while still taking part of suburban life, characterised by a series of commercial buildings of heterogeneous architectural style. By chance, the topography and the wooded character confers a certain dignity to the site. The client wished to erect there a building intended to house liberal professions. A curved form which could accommodate the numerous contradictions of the site came quickly into mind, although the definitive form was born many months later on a steam boat while leaving Istanbul after visiting the St Laymaniye mosque.

The site required a building of small scale with vernacular shape, while the programme suggested the most flexible spaces possible. The research was therefore oriented towards a structure of pillars instead of bearing walls. Heaps of masonry would have been too cumbersome and columns in reinforced concrete out of context. The floors could be in reinforced concrete, in steel or in wood. The sensitivity of the client and the architect for this construction which needed to be flexible and welcoming lead them to envisage it as a large piece of wooden furniture. More than any other material wood imposes formal construction rules which influence greatly the appearance of the construction.

A regular prism of 21 sides includes the central lobby covered by the main meeting room. An annular prism encircles the former and includes the connecting thoroughfares, such as the three spiral staircases, access landings to all serviceable areas, entry hall as well as the mezzanine library which is located off the meeting room. The work spaces are then laid out on three levels around the central core in open rings. Two brick walls pleated and perpendicular to the edge frame the entrance and contain the service areas and utilities (small kitchens, fuse boards, ventilation equipments). The main plumbing and technical areas are situated in the basement under the centre of the building.

Four lines of columns situated at the vertexes of a concentric polygon with 21 sides rise out of a slab of earth with superficial foundations in reinforced concrete and from the brickwork of the basement. The whole structure is in pine, either in common section solid pieces or glued laminated pieces. The columns, of rectangular section, support beams that radiate from the floors, which in turn support the joists. The floor joists are of equal length and intertwine while gradually separating from each other as their support distances diminish. They are perforated in the centre in order to hold the electric cabling. The floor itself consists of boards which form the ceiling of the level below, of perpendicular laths, and of an upper floor board covering. The space between the floor boards contains the ground conduits for the electrical system and the ventilation system as well as the electric heaters. Above the central hall and to support the upper meeting room, brackets support the beams that radiate and overhang from the first inner ring of columns. The spiral staircases ensure the transversal stability of the columns to which they are attached. The round stainless steel rods situated between the peripheric columns of the ground floor stabilise the entire structure. The substantial overhang of the roof structure protects external wood finishes of the window frames, and the gallery on the 1st floor, from rain and sun. The overhang supplants the need for a gutter (except over the entrance) as rain water is collected in a pebble drain situated in the paving around the building. The overhang of the beams of the lower roof rest on the exterior posts of the gallery except for the last three to the right of the brick walls. A stainless steel plate reinforces the last beam of the roof (on either side of the entrance above the large trapezoidal windows), which takes the weight of the beams by means of a flat rod, or “polonceau” beam. Finally a small metal structure in the form of a “bicycle wheel” supports a heptagonal veranda and the weather-vane at the top of the building.

All the external and internal woodwork is in dark red meranti. The roof is composed of the following layers :
– a ceiling in pinewood planks painted white ;
– a black polyethylene film ;
– a continuous impermeable film of aluminium on Kraft paper ;
– 15 cm rockwool insulation ;
– pinewood roof panels covered with zinc-copper-titanium with ventilation folds.

The ends of the roof elements are protected by zinc covers. The lower part of the roof is glazed in order to insure adequate natural light for the rooms on the 1st floor. All the interior partitions are glazed and fitted with venetian blinds.

The building is equipped with opening windows but also with a system of ventilation. The ventilators are situated along the brick walls. The air is distributed by flat conduits in the thickness of the floor and recycled via the entrance hall by a basement extractor which also recycles the air from the toilets. The ring-shaped table for the upper central meeting room was installed in 1992 but shelving in the mezzanine library have yet to be installed. A custom-fit complete system of furniture and partitioning, integrated into the overall concept, was designed in detail, but not used.

The hall floor is covered with polished bluestone. Straw matting covers the entrance and the zone under the stairs, white ceramic tiles cover basement floor, and polished wood or fitted carpets floor in the offices. Otherwise, the interior is natural wood colour or painted white. The brick walls are painted in gloss in the basement and are plastered, wallpapered and painted in the rest of the building. The ceilings are painted concrete in the basement and painted wooden planks elsewhere.

The weather cock in stainless steel at the top of the building is the work of sculptor Olivier Strebelle.

The building work was carried out in a remarkably harmonious fashion under the influence of the client, Eric Boulenger. Understanding the difficulties of the building, Mr Boulenger encouraged all workers, helped select workers he had not found himself and, finally, made available necessary financing. Therefore, more than is typically the case, credit for the project must be given to all those who contributed to its success. The master carpenters Armand and Verboomen were the first to set the tone. Workers actually sang on the work site. The skill and youthful experience of the workers, combined with their enthusiasm produced a structure of rare quality. Carlino, the foreman of ABC, the main contractor for the masonnry structural work and internal carpentry, along with his team and the subcontractors spared no effort in order to meet high standards. Zinc specialist, Francis Dethioux, and his assistant André, constantly sought perfection always with kindness and good humour. Finally, Olivier Strebelle, the distinguished sculptor, set aside other important work in order to design and make the weather cock.

Credits
Architecture and Engineering:
Philippe SAMYN and PARTNERS All projects are designed by Philippe Samyn who also supervises every drawing