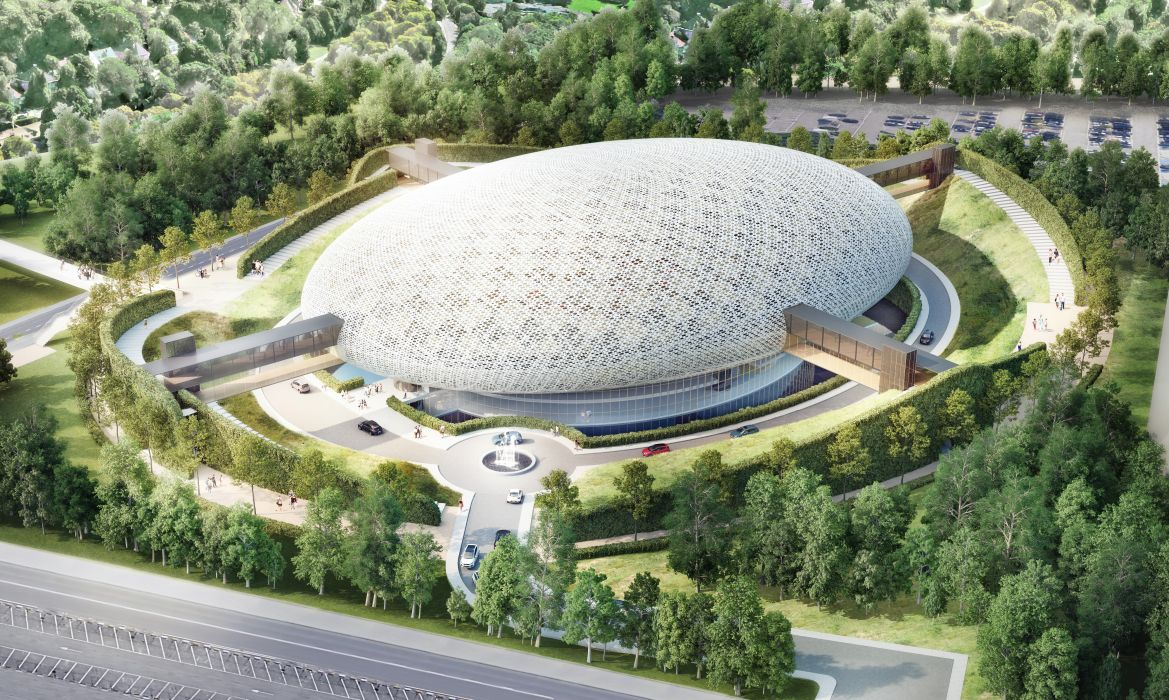 655 – THE “FLAT BOULDER” BASKETBALL ARENA ON THE HEYSEL

Trade Mart on the Heysel plateau in Brussels, Belgium.

The BRUSSELS basketball club has the ambition to play a leading role in the Belgian basketball elite while maintaining a strong Brussels identity. The club has long been looking for new accommodation with a larger basketball hall.

AG Real Estate COPID nv is making its site on the Heysel plateau available to create a brand-new sports complex, a stone’s throw from the Atomium.

The aim is to realise an exemplary project that is good for AG Real Estate as well as for the City of Brussels and for society.

The site is an entrance to the Heysel plateau and enjoys easy access to public transport and cycle routes; a footbridge connects the site to the “Heysel Esplanade” tramway station located across the motorway. So the site is a ‘prime location’.

The site houses the Trade Mart, the Buro and Design Center, three large open-air car parks (with 911 parking spaces), lawns and a forest. The issue is not to position the new building on one of the car parks.

The surrounding buildings, car parks, pedestrian bridge, vegetation and orientation have all contributed to the location of the building. This is oriented according to the main wind directions, north-south. This location is just like a sundial and radiates tranquillity.

In the interests of the environment, the building is designed to be as compact as possible so that the green space is affected as little as possible. The destroyed green space is counterbalanced by a wide new green zone around the complex. Also, as desired by Bruxelles-Environnement, the uprooted trees are reused as lumber and compost. As a result, these trees are still being put to good use instead of being burned as firewood.

In order to manage possible traffic jams and the access of (freight) vehicles, the entrance of the building for rolling traffic is placed on the Madridlaan and in the far corner of the site.

The different functions are positioned one above the other; the architectural form of the sports complex comes from the response to the requirements of the international standards applicable to high-level basketball matches (FIBA): an ellipsoid rises from the green like a flat boulder in the landscape. The flat boulder (a dome) provides a sense of belonging, which is crucial for sports competitions.

The hall has been conceived as a true event hall for supporters and players, a special sacred space.

The ellipsoidal building has four levels and is completely focused on basketball (players, spectators, sports arena, catering). Below this are two more levels intended for VIPs, and for outside organisations and schools.

The lowest level (+60.88) is surrounded by a lake. The central zone houses a multi-purpose gymnasium with its storerooms. On its periphery you will find changing rooms, a lettable office area and a large VIP restaurant with kitchen.

Like the underlying level, level +65.00 is also partly used by outside parties and organisations, and is directly accessible from the outside. The area is clearly divided into a public zone (north side), intended for the VIP lobby, and a closed, secure zone (south side) intended for the players, their coaches and the administration of the BRUSSELS club.

Level +70.00 houses the official playing field level, and is the first floor that is located in the ellipsoid. The aim of this closed level is to allow the players to concentrate fully. This floor is exclusively dedicated to basketball activities and the press.

On level +73.30 there is space for the spectators during the breaks and before and after the game. The entrance to the area beneath the stands is also located here. Emergency evacuation is possible via four footbridges.

The official entrance to the complex is on level +76.60. This is via four footbridges equipped with lifts and stairs. The openings in the façade, the view through to the fields and the mezzanine effect to the floor below give users a sense of freedom and space.

The entire structure of the ellipsoid consists of a light steel truss with an upper and a lower “perforated” finishing layer. This creates a double façade, ensuring that building services and the like can be neatly stored so that nothing is visible on the ceiling in the spaces. The height of this spacing is 3 m at the top and 3.5 m at the sides of the ellipsoid.

The roof of the complex consists of perforated steel plates covered with plastic sheeting. These allow light to pass through, making it possible to create a diffuse light over the entire ceiling surface of the interior space. Thanks to the air permeability of this double skin, there is a possible natural ventilation between the roof itself and the suspended open ceiling.

The entire roof construction is based on a module of 4.50 m x 4.50 m that starts at the highest point of the ellipsoidal shape.