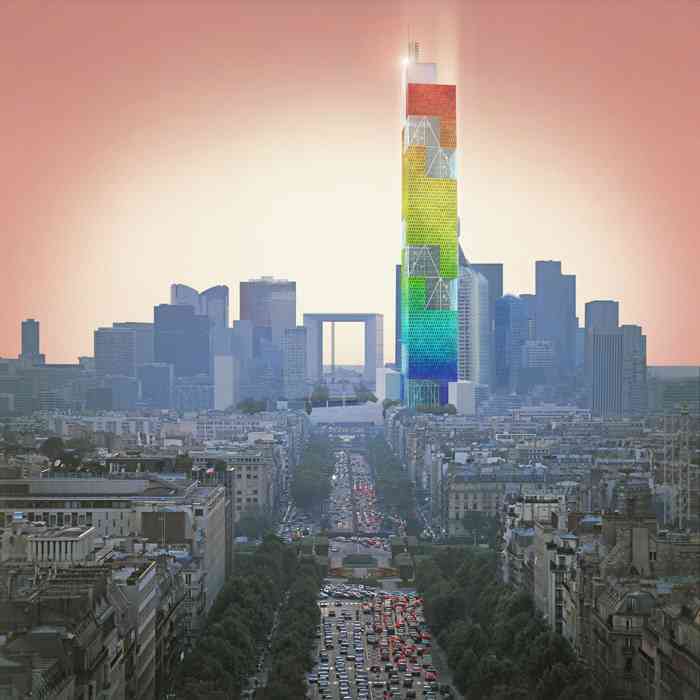 The competition for the Signal Tower in the La Défense district in Paris was launched by the EPAD (Public Corporation for the Development of La Défense). Project implementation is in the framework of the call for tenders, in partnership with Dexia Bank.

Of the six proposed sites, the location selected is on the bank of the Seine, at the entrance to La Défense, so as to give precedence to the strong symbols at the centre of the district. This situation means that a solid link can be forged between the district and the river, and heals the scar currently separating the area from the inner city.

The tower is erected along the line of the historic Louvre/Arc de Triomphe/Grande Arche axis. Without disrupting it, it punctuates it with a major landmark. Opposite the Nobel Tower, it marks the entrance to La Défense.

Viewed from Paris, it rises in front of a decor of skyscrapers, thus causing the urban landscape to expand. This powerful contemporary symbol constitutes the new linking piece connecting a district with the city and its river.

The exterior development is characterised by the extension of the slab of La Défense, which juts out over the Seine. It supports an esplanade planted with trees linking the business quarter with the river bank. The alignment of the trees and modulation of the parks are accompanied by a three-dimensional squared structure, which serves as a multi-purpose support for amenities for short-lived events and happenings, illumination, or even sprays to cool the air…

The edge of the slab is occupied by residential units, inserted into its layers and offering a human façade to an infrastructure of traffic flows and car parks.

A light footbridge is planned above the river, to guarantee continuity of the traffic.

The ends of the quai de Seine are embodied by two towers, of 10 and 20 stories, intended for all social profiles. More housing is also provided for on the north side of the esplanade, with an enormous apartment block which screens highways with heavy traffic.

The Nobel Tower is incorporated into the esplanade in such a way as to ensure that its base and its canopies are clearly visible.

Opposite this tower is the Signal Tower. A departure from the often overly compact appearance of contemporary towers, it displays a certain discontinuity of volumes, offering a relative dematerialisation.

This lively approach to the geometry enables the programme to give expression to its diversity. The project mainly offers office space, but also residential units, retail space and a hotel with a panoramic restaurant open to everyone.

The tower exhibits a new language. Moments of its internal articulation are uncovered behind its polychrome outer walls. The visible structure follows the periphery or accompanies the volume setbacks. The option of a monolithic block is broken here: light penetrates the material and colour adorns it. In the aprons of the outer walls, millions of electroluminescent diodes diffuse their light and compose moving and programmable polychrome pictures.

The tower is visible by day and by night, punctuating the horizon with its presence.

The 100-storey block is made up of ten 10-storey sections. The L-shaped floors with a surface area of 1.620 m² lend themselves to a wide variety of uses on account of their low height.

Large free spaces are arranged between the groups of 10 floors, enclosed by single glazing.  They constitute venues for occasional activities, informal meetings or exhibitions. These large spaces are interconnected by the void of the central opening running the entire height of the tower. Fresh air rushes in here by natural draught so that the air is renewed two and a half times an hour. This air flow is regulated by motorised air intake valves.

The tower’s architecture incorporates the latest concepts and techniques in the field of high environmental quality (HEQ).

The opaque parts of all the outer walls are covered with photovoltaic panels, and exterior metal blinds are activated automatically according to the amount of sunshine.

The spaces are not very high and receive plenty of natural light. So-called “light shelves” reflect the light into the interior onto the ceilings.

The ceilings are fitted with a radiant system that guarantees optimal comfort during hot summer weather.

Moreover, rainwater is collected on the roof and at the foot of the outer walls. This is recycled for bathroom and cleaning purposes.

Environmental efficiency is also to be found in the structural design. Thanks to the solutions adopted, materials consumption has been reduced to a quarter and a high-rise construction if fully justified. The structure’s design makes a distinction between load take-up in normal conditions or in the event of fire.

Thus, the floors are made of thin reinforced concrete floor slabs stiffened by a grid of slender trussed girders. In the event of fire, the slabs undergo a major deformation following the subsidence of the girders, but remain intact thanks to their own fire-resistant reinforcement.

In the event of an attack, a second form of structural security is provided by the vertical circulation shafts, formed by four tubular cores in latticework measuring 10,8 m on the side.

In this project, results in terms of technical efficiency have not been sought for their own sake. Rather, they make it possible to cope with contemporary constraints and respect environmental priorities. An expression emerges from this, which stimulates and enlivens a new meeting place  between the historic city of Paris and its business quarter.

533-Project for the Signal Tower at the quartier de la DéfenseFriday, May 9, 2014Filippo Aimo