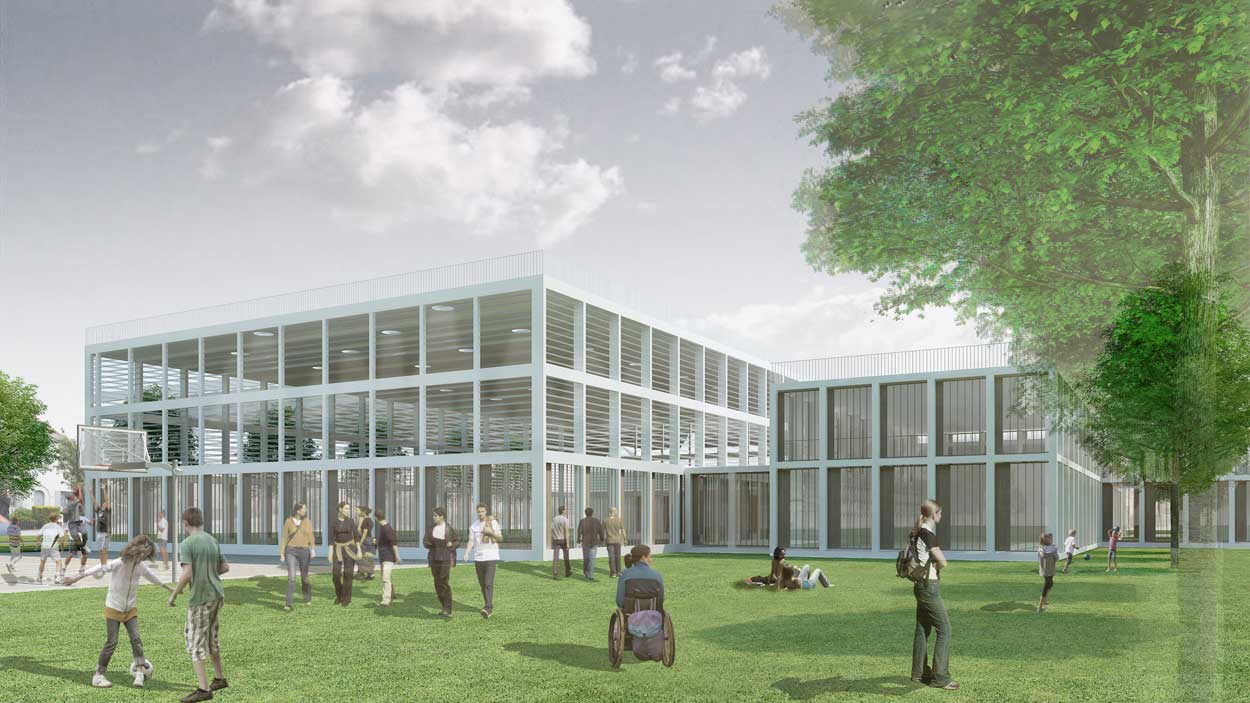 The assignment is part of the broader “DBFM Scholen van Morgan” project launched by the Flemish Regional Government with private financing.

The private primary school, the Agnetendal secondary school and the Agnetendal Peer boarding school have together opted, with the governing bodies of the Peer Local Council, to establish a new school campus and sports hall on agricultural land located in the immediate vicinity of the existing school.

The site is located on the outskirts of the urban area and is a large area of agricultural land which is almost level. The urban area itself is highly fragmented and does not have any particular landmarks which would rule out an orthogonal structure.

On the Panhoven site, there are a number of existing buildings which will – after demolition, renovation or restoration – be refurbished or reallocated. New buildings must also be built.

The following buildings are currently located on the Panhoven site:

On the basis of the programme of the principal and the site plan developed by third parties, the assignment can be summarised as follows:

The site is to be an example of sustainability in the fields of living and working together, urban development, town planning, construction and architecture.

The proposal should be viewed as an blank sheet of music, where the site plan, with its rhythms and guidelines, is the basic structure.  The music itself, with all its variations, remains to be written, in collaboration with the principal and the various organising authorities.

The project attempts to create a calm, sunny, sustainable and cheerful whole, organised around several clusters.

The sun and the orientation are the basis of the architectural structure. For functional and energy-related reasons, a strict north-south orientation is kept for the main sides; the play areas, playgrounds and boarding school bedrooms resolutely face directly south.

On a orthogonal base, the guidelines of the existing school building (an iconic image of Peer) acts as the basis for the new campus buildings and their outside areas. Also intentionally, it has been decided not to degrade the image of the school by creating new bus stops or parking areas.

The listed Vermeulen farm becomes a focal point through its transverse and set back position, alongside the slow moving traffic. This is where the majority of the main entrances are grouped together.

The aim is also to conserve as much as possible of the existing buildings.

Clarity, calmness and modesty is sought in the arrangement and architecture of the buildings, this it to promote, as a priority, the concentration and safety of users. The four main buildings are also designed to be easily identifiable, extendable and remain visually under control, while at the same time making up a coherent whole.

In order to respect the proportions of the school, the height of the buildings is intentionally restricted to three floors. This is more comfortable for the users and beneficial in terms of fire prevention measures.

The inside of the campus remains as green as possible. Long rows of trees with crowns 10 m in diameter and hedges are part of the plan. With their horizontal lines, the planned buildings are in proportion with the tree alleys.

The different types of traffic are separated (pedestrians, cyclists, cars, buses and lorries). In order to limit inconvenience for neighbours and traffic on the major roads, the bus and car traffic and car parks are grouped to the north in a secure area. Slow-moving traffic remains on the south side and at the centre of the campus. Bike sheds are located alongside the play areas. The car parks are used for all buildings and facilities (schools, sports complex and sports fields, except for the boarding school), this is also the case outside school hours.

Safety and visual control are ensured and strengthened though:

Giving classes and learning requires a retreating from the world and its distractions. This is why the architecture develops a calm atmosphere.

The school buildings are long and thin, with a central corridor. Lengthwise, they are in modules 2.40 m in order to ensure the greatest degree of flexibility for compartmentalising floors. The width of the buildings results from the addition of the width of two classrooms (2 x 8 m) and a corridor (3 m). The central corridors, which are perceived as streets with squares and houses (the classrooms), have many opening to the outside. The full lengths of the corridors are naturally lit via the glass partitions of the adjoining classrooms.

A concrete grid organises and provides the primary rhythm of the sides of the buildings, the outside galleries and the covered parts of the playgrounds and bike sheds. The secondary grid of the sides remains free (30, 60, 90, 120 cm, both horizontally and vertically, according to the light study). The basic frame, with its row of columns which border the play areas, allows for the inclusion of elegant fences made from galvanised steel.

It is planned that the roofing of the play areas is made from a highly transparent plastic membrane (PVDF/PTFE membrane with aramid fibres) which slopes down towards a central impluvium which has a tree at the centre. The membrane is anchored on the concrete frame of the vertical sides. Glass or perforated stainless steel strips provide protection from the wind and rain.

The classrooms are oriented north-south in order to more easily reduce overheating.

Common areas cut across from one side of the building to the other.

The choice of a concrete frame that is largely prefabricated and sides decorated with concrete elements with a fluorinated coating allow the construction time frame to be greatly reduced and, as such, inconvenience for neighbours, as well as reducing construction costs and providing long-term durability.