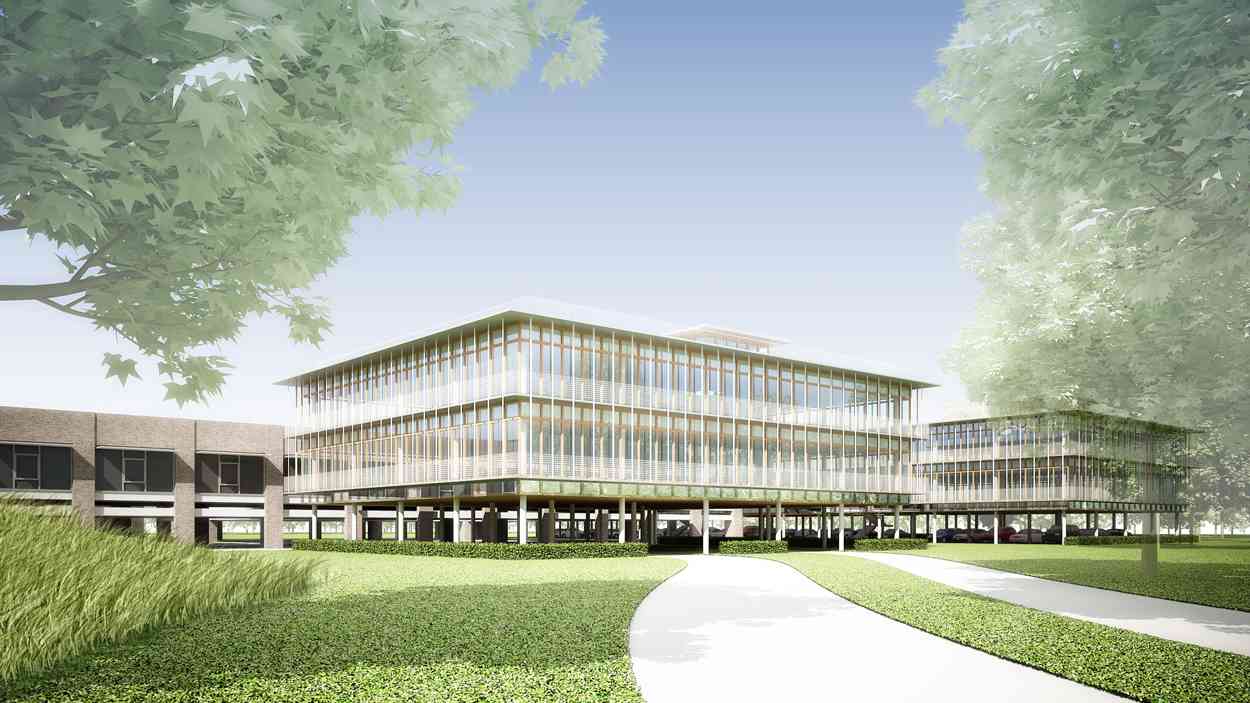 543-Modular extension of a Research Centre

The two buildings of the former Nissan research centre, built in 1991-1992, are located in a country park of around 5 hectares, including a pond.  Today they have changed owner and are occupied by two different tenants.  The current owner hopes to add value to the site and increase the office surface area by putting in place a series of modular blocks that can be produced in several phases.  He hopes to have the opportunity to render the two existing buildings autonomous in the area of building services.

The extension is in the form of a string of square blocks of 25.20 m along the sides crowning the existing buildings.  Each block is drawn on a square structural frame of 6 m centre distance, i.e. 4 bays in each direction.   It includes two levels of offices above one level of open parking.

One of the two office levels corresponds to the level of existing offices and a footbridge links the two blocks.

In each block, the offices surround a square atrium of 6 m on the side set out asymmetrically, in such a way as to allow the fitting out of the offices and other premises of varying depths depending on the needs.  This atrium, not very tall, provides natural light at the heart of the building.  It may be open or shut depending on needs, with fire safety not requiring that they be shut.  Indeed, the two levels of each block form a single fire compartment in duplex, with a surface area of less than 2,500 m².

On each level, a suspended peripheral catwalk is accessible from the routes surrounding the building.

A vertical stair/lift core, situated between two adjacent blocks, links the levels between them and to the ground floor.  A toilet facility is provided on each plateau near the stair/lift core.

The ground floor continues on from the existing covered car park.  The car park is very broadly open on three sides and its considerable vertical clearance gives it high levels of ventilation and natural lighting.  Depending on needs, an entrance hall may be set up in front of the vertical stair/lift cores.  Premises are available in one of the 6 m bays: technical spaces, meeting rooms, archives, etc.

543-Modular extension of a Research CentreThursday, May 8, 2014Filippo Aimo