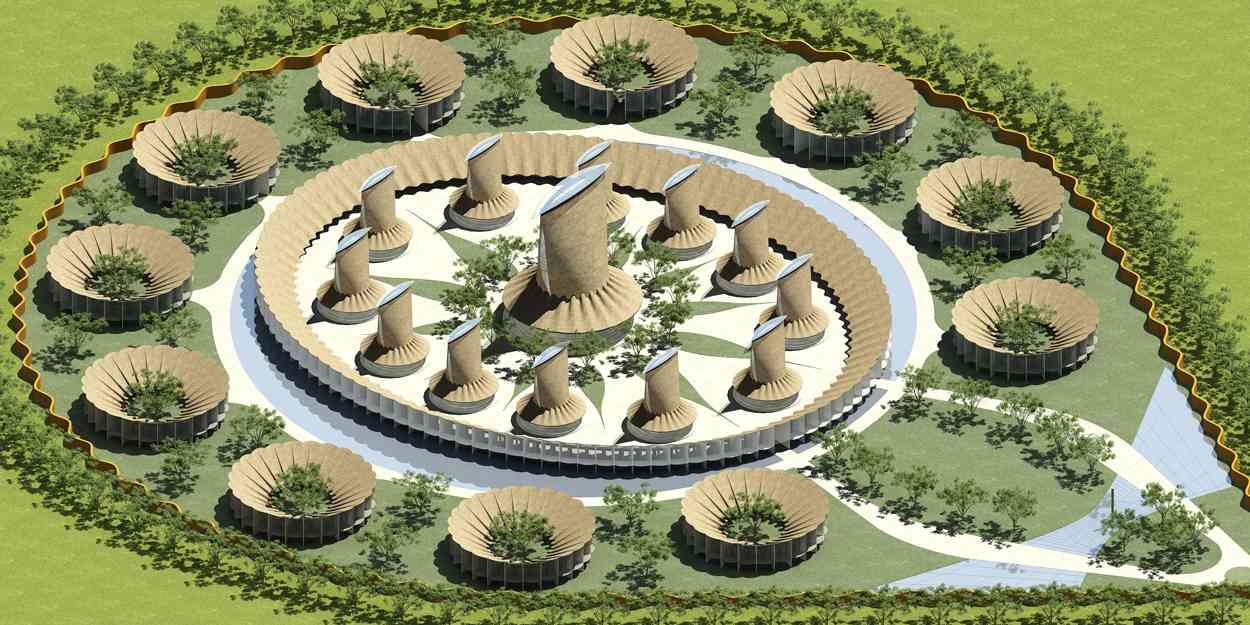 CONGO, THE DEMOCRATIC REPUBLIC OF THE

This project inscribes itself in the context of the search for an architectural identity based on the unique culture and social structure of Katanga, for an architecture in harmony with the climate and ecosystem, for construction methods that reflect the know-how of the regional artisans, and finally for principles of construction that favorize the use of materials most commonly used by the majority of the population.

The cultural richness of Katanga is fully expressed, on the one hand, by a series of ethnic objects on display both at the Lubumbashi Museum in the Congo and at the Museum of African Art in Tervuren in Belgium and, on the other hand, in the tales, legends and stories transmitted orally that are as rich and intense as those of Egyptian and Greek mythologies.

The handicrafts sector, particularly lively and inspired, must be preserved and, what’s more, encouraged on the occasions of construction of public buildings. A detailed survey of the most vibrant arts of the region will also enable refinement of the nature of their participation. We can already mention the wood craftsmen and carpenters  of the region, among them the pirogue carvers, the cast aluminium craftsmen, the basket weavers, the mechanics and artisans in metal bars and sheeting, sculptors working in colored mixtures of concrete and plaster, the artisans making the thatched roofs, the makers of multi-colored textiles  and expressive forms of apparel, the calligraphers…

There are few places on this earth where the fertility and opulence of nature is as evident as it is here. It literally submerges humans who have learned to use it with such subtleties that we are far from knowing its secrets.

To study architecture in Lubumbashi is therefore, in itself, a unique sensory and intellectual experience, diametrically different to the experience of architectural study in one of the great metropolises on this planet where nature is barely perceptible.

Elements of nature such as the sun, the wind, the rain or temperature are our first conceptual tools.

At 12° below the Equator, the daily path of the sun varies little from one end to the other of a line drawn from east to west. The sun rises and sets suddenly. Natural light is bright during the mornings and evenings of a sunny day, and very soft on gray days. The countryside abounds with a multitude of perfumes. Temperatures vary little, and cool days are rare. The winds, influenced by the South Atlantic anticyclone and the Indian Ocean, blow mainly from south to east. The landscape of the savannah is dotted here and there with termite hills.

The aim is to realize a compound housing a school of architecture as well as lodgings for students boarding on the campus.

Teaching in the school will be developed along two major axes : the first corresponding to the fundamentals of architecture  and the second to the acquisition of various artisanal techniques  practiced in the region.

Teaching is principally based on fundamental theory books. The students, practiced in the exceptional techniques of calligraphy acquired during secondary school studies, will compile their own course notes. Progress will be evidenced in the series of successive notebooks compiled by the students.

The student’s work tools will include A4 notebooks, a ruler, a protractor, a compass, crayons and a fountain pen for theoretical studies. His drawing board will consist of a strong and seamless panel sitting on sawhorses with a T-square and a set-square. All drawings will be made on pre-cut sheets of paper in A4, A3, A2 and A1 format. Only crayons will be used to color the drawings.

Drawings will be stored flat in drawing cabinets. Theoretical work will cover what is termed « exact science »  as well as social science.

Teaching will, thus, not call upon information technology or its costly equipment. Use of a computer is not essential to mastery of the fundamentals and can be part of a complementary education initiative or can be learned extemporaneously using personal portable equipment.

Right angles are practically absent from formal expression in traditional Congolese culture. This leads us to the use of a curved floor plan.

An elliptical enclosure includes the administrative offices, the libraries and the crafts studios as well the lodgings of the guard and a block comprising twelve circular classrooms and a public meeting hall in its center. This is ringed by twelve satellite constructions each comprising 24 spaces to house the students, and the ensemble surrounded by a second circular enclosure.  This ensemble morphs into an ovoid to the north where a large sundial marks the entrance courtyard.

Taking inspiration from the forms of traditional masks, the intention to use corrugated metal sheeting and to ensure a comfortable level of ventilation leads gradually to conceive a cylindrical form for the classrooms surrounded by an exterior terrace with a truncated roof surmounted by a higher roof composed of two surfaces that can be developed along conical forms. The roofs are in corrugated sheet metal covered with thatch.

Three lenticular slits separate the two canvas sails. Louvres with transparent glass slats angled to increase air flow as one ascends cover the two vertical windows.  Vertical ventilation slats border the slit at the top of the roof underneath a large skylight. These three slits are strictly oriented on the east-west axis allowing penetration of sunlight every day of the year from sunrise to sunset.

A vast white cotton tent is installed on the roof above the cylindrical classroom to ensure diffusion of light while protecting the class from direct solar exposure. A second tent in the form of a surface of revolution is placed a certain distance beneath the truncated roof of the exterior terrace. It serves as a solar energy captor. Through the chimney effect, just as with a termite mound, the heated air is evacuated at the summit of the structure. In its movement it pulls the heated air in the classroom with it. The dominant winds from the south that traverse the louvres accentuate this natural ventilation effect.

The roofs are erected on a tri-dimensional light-frame of soldered 18 mm (maximum) rebar.

The ensemble is set upon 12 rectangular walls radiating on the periphery of the classroom. The surfaces of these are in hardwood or glass slats framed in steel. These twelve columns also invite artistic intervention.