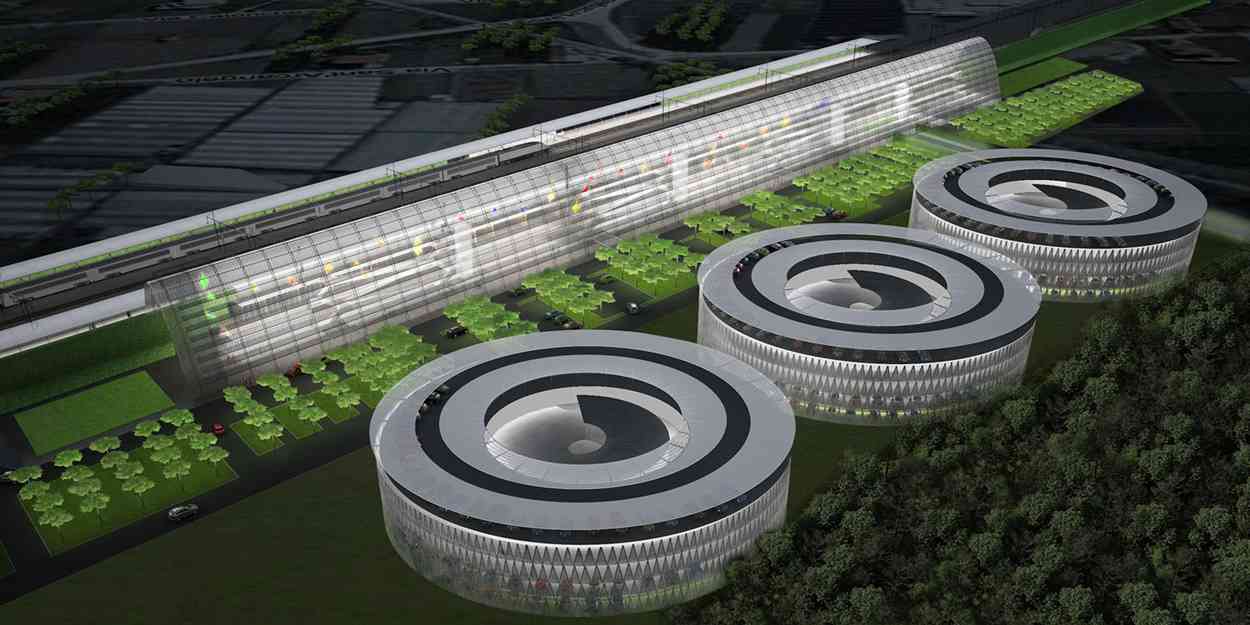 A reduced-footprint project on the site.

The site of the project, at the heart of the Agro-Sarnese-Nocerino plateau, preserves the agricultural nature of the region. The fertility of the soil is resource to protect and valorize. Thus, the project aims to reduce the area it occupies to a minimum.

The route of the new high-speed railway line divides the area into two distinct zones. Communication between these zones is limited to particularly constricting and existing tunnels.

The principal structure of the station and the parking areas is located in the southwest area due to the presence in the same zone of the Circumvesuivian line. What’s more this orientation enables better exposition to sunlight and to the view on Vesuvius.

The concentration of the principal structures of the station on a single slope of the railway line also signifies the flow of traffic and parking and of the Circumvesuviana towards the ticket desks passing by the commercial areas without dispersing the flow of the users.

The present road system around the new station is poorly structured. The project proposes a slight modification to this system to enable direct access to the station. It includes a one-way flow of traffic to separate entering and exiting traffic while maintaining the use of the existing tunnel below the high-speed rail line, which is too narrow to enable two-way traffic.

The decision to concentrate the principal area of the station on one slope creates a clear spatial hierarchy of the surrounding areas with a front zone destined for the flow of passengers and a back zone destined for services, provisions and technical access.

All arriving or departing passengers, whether by car or by the Circumvesuviana line cross the principle hallway and the commercial zone.

The space of the main hallway is conceived to provide a comprehensive and easily understood view of the access systems to the platforms (ramps, stairways, or lifts). The back area of the station is dedicated to service provider access. This clearly separates provision delivery for shops and restaurants as well as access to areas of the station by technical staff from general passenger traffic flow.

The roof of the main hallway is a continual parabolic section that enables much freedom in the determination of extension of the station in different phases. The form and organization of the parking areas (Park and Ride) also follow the development of the project in three or four phases.

The first phase includes the realization of two tunnels below the high-speed rail line, the parabolic roof of the station extending to the second tunnel, the first cylindrical building of the Park and Ride facilities and the roofs of the high-speed line and of the Circumvesuviana line.

The third phase comprises the realization of the required interior functional services of the station and the construction of the third cylindrical Park and Ride building.

The fourth, and optional, phase includes the extension of the main building of the station above the Circumvesuviana line, in the expectation that this line will be doubled and it will be necessary to cover a new southern platform for this line. This extension is already possible in phase 1 and is not necessarily connected to the development of phases 2 and 3.

The covering of the principle space of the station aims for greatest possible lightness. This is the reason for the choice of a parabolic form—an ideal structural concept for vertical weight bearing that can cover a large space without excessive material consumption.

A series of metallic trellis parabolic arches, spaced according to a 5.4-m module support a secondary structure in aluminum profiles affixed to which are multi-cellular polycarbonate panels—both translucent and thermically insulating that fill the main hallway with diffuse natural light.

Multi-cellular polycarbonate presents thermal insulation characteristic superior to high-performance double-glazing (up to 0.8 W/m2K for ten-layered panels), a weight of approximately 10 times less (5 kg/m²) and 200 times the impact strength of glass. The light weight of this type of panel makes on-site manipulation easy as well as contributing to its superior resistance to seismic movement. In the past few years the durability of polycarbonates has increased exponentially: presently the material is guaranteed for periods from twenty to thirty years but it is expected that it will maintain its stability of performance beyond these limits. In contrast double-glazing does not guarantee the same characteristic of thermal insulation for such periods. Polycarbonate is 100% recyclable, while taking into account the high costs of basic materials and that the fact that development in the polycarbonate sector can only accelerate thanks to its use as a support material in optics, CDs and DVDs.

For solar protection in the summer periods, an exterior screen composed of photovoltaic bands follows the diagonals of the trellised profiles. This contributes to the benefit of solar energy in winter periods. In the absence of specific subventions the photovoltaic panels could be replaced by perforated metallic sheets—at a lesser cost UV protection in the interior is reinforced by a series of textile « butterflies ” that could also serve as supports for publicity, event announcements or artistic creations.

It is important to note that height of the volume of the hallway enables temperature stratification—warmer in upper areas and cooler in the lower areas thus reducing the discomforts of the effects of global warming.

In the case where, after a thorough climatic situation study, it would be necessary to increase the level of solar protection, a possible option would be to cover the entire south facade with moveable aluminum or galvanized metal panels. These options are all possible and in no way affect the functioning of the project, the quality of main space of the station hall is entirely independent of the type of solar protection selected.

The construction of two tunnels underneath the rail lines is proposed mainly for reasons of security as well as the evident advantages as to commercial traffic. In the eventuality of a fire, a terrorist attack or any other event, if one of the two tunnels is blocked, the other offers an alternative path of evacuation.

Below the main station building is located the overflow basin for the canal to protect the stability of the retaining slope of the rail line in the case of any leak. Existing reinforced concrete and brick retaining structures are mostly preserved integrally. Only the small tower of the existing station is redimensioned at about 1 m in order to remain below the newly elevated level. To the back of the station it is proposed to conceal the existing construction with appropriate use of vegetation.

The form and the positioning of the Park and Ride zones are critical to the project because of the important number of places and the constraints of construction by phases.

In total coherence with the concept of compactness within the environment, the parking zones are situated on several levels to shorten the distances to traverse from vehicle to train.

The circular plan volumes proposed are particularly adapted to the function of parking areas on several levels and each of the three identical cylindrical corresponds ideally to one of the phases of construction (phase 2 includes an additional small parking that complements the two first volumes whose placement perfectly follows that of the third volume.

The facades of these cylindrical structures are composed of variably perforated metal triangle to augment or diminish the transparency.

The top level is open and the places for the vehicles are simply protected by an awning.

A lightweight metallic safety grill ensures the security of the users.

In accordance with the overall concept the structural morphology aims for maximum lightweightness to facilitate transportation, economize energy throughout the construction, increase the speed of the realization and obtain better resistance in the event of seismic activity. A steel structure for the columns and lattice beams and a composite steel and concrete structure for the floors is the most appropriate and lightweight solution for an open-air parking. Each transversal lattice beam rests on the façades and two intermediate columns, with spans of 3m, 10m and 3m to reduce the loads on the foundations.

The covering of the platforms.

The covering awnings of the high-speed train platforms are both simple and functional. The coverings are in metal sheeting and the supporting columns are inclined to increase the area of circulation. Heated waiting rooms are at the disposition of users during the winter months. The south platform (direction Rome) is vast at the level of the platform and in the interior of station building. The north platform (direction Reggio de Calabria) includes smaller waiting rooms (2.70 x 5.40 m) regularly spaced along the platform.

The covering of the Circumvesuviana line platforms is similar and includes an additional covered space to the back for bicycle and motorcycle parking.

The etymology of the word « ecology » (oikos = house; logos = word, reason, study of) leads to a logical approach in the choice of the management of the house, to sound and responsible choices: it is this approach that guides this project. The ecological approach is developed at all levels and it is important to prioritize choices according to the importance of their functional stake.

The first objective is to reduce the zone of expropriation to a strict minimum thus the reduced footprint of the construction. The station is developed in length along the high-speed rail line and the main access road is traced parallel to the rail line in order to minimize impact on the cultivated fields and greenhouses in the area.

Lightness signals going to the heart of the materials used and to use all materials to their full potential. No material is intrinsically more ecological than another. There are simply materials better adapted to their use. The choice of steel for the structures of the station and the parking areas is the direct consequence of this principle. It is the same principle that guides the choice of multi-cellular polycarbonate panels for the covering of the station. Their superior thermal insulation capacity and light weight (5kg/m²) combined with elevated resistance to impact make them preferable, for this project, than any other solution in glass.

The lightness of the building also signifies economy of material for the foundations and economy of energy for transportation and construction.

The value of flexibility is particularly important in light of the requirements of the project. An adaptable building that can accommodate various functions with a minimum of disturbance and that can be augmented or reduced in volume without the high costs of most transformations is destined to have a longer useful lifetime.

Rational use of energy

Rational use of energy goes much further than demonstration of available alternative sources of energy. The photovoltaic panels are proposed not only because of their capacity to generate energy but also for the solar protection advantages they present. Rational use of energy also includes the use of water from the aquifer as a thermal mass both in summer and in winter.