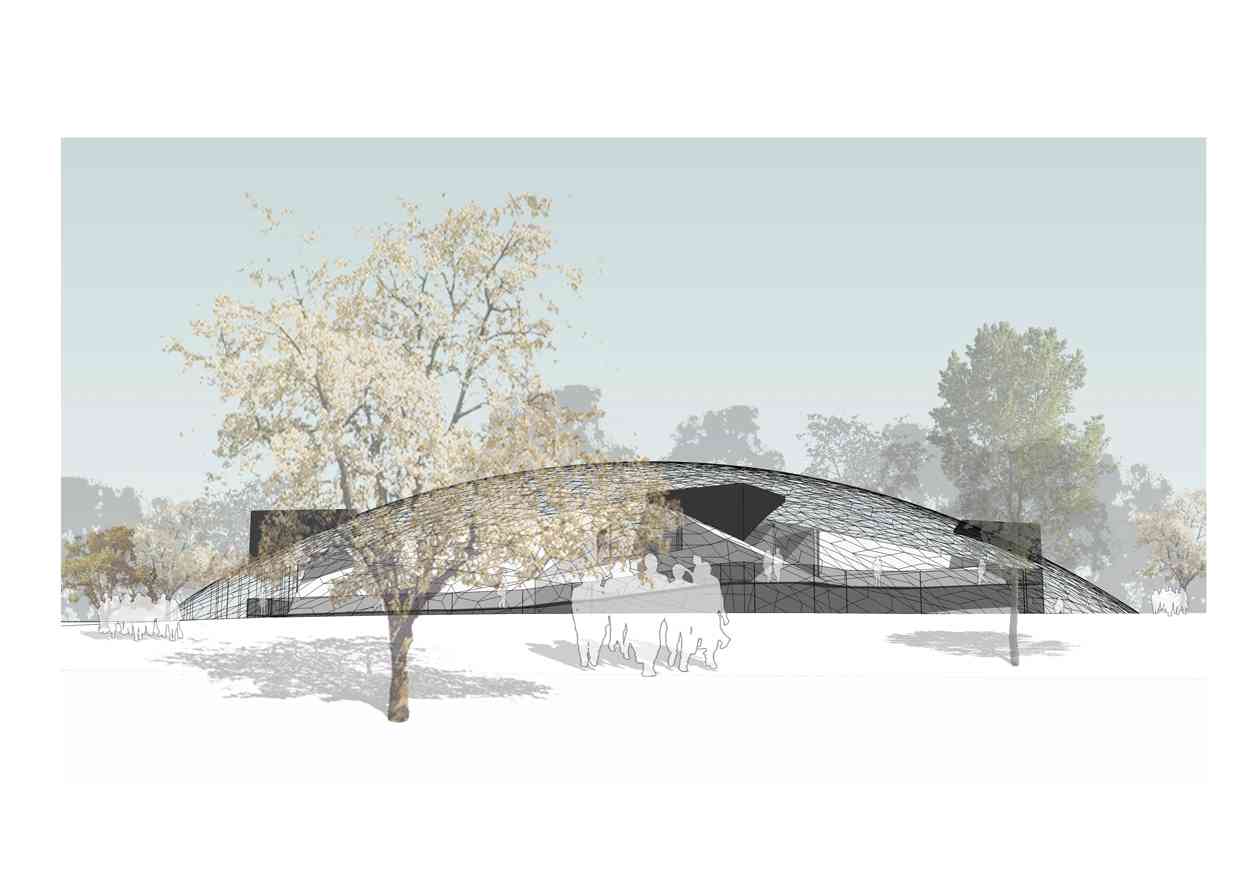 The Commune of Bastogne, in collaboration with the Regional Tourist Office and the Tourist Information Office of Bastogne, has decided, thanks to the European Structural Funds, to build a new Centre for the Memory and Reference of the Second World War on the site of the Mardasson Memorial and the Bastogne Historical Centre.

With this goal in mind the Intercommunal Association for Sustainable Economic Development of the Province of Luxemburg (IDELUX) has organised a European architectural and scenographic competition for the extension of the existing building of the Bastogne Historical Center.

The Mardasson Memorial, situated on a site surrounded by gentle valleys, imposes itself, as it is fitting to do so, in the landscape. Its presence is emphasized by the surrounding vegetation. It is, therefore, essential to avoid any new construction that would disturb the presence of this monument. Thus, it is proposed to extend the footprint of the existing museum that this new programme requires and avoid any annexed construction.

The transformation and extension of the existing building, with its sharp lines, offers the image of an enveloping spherical calotte. Its structure follows the geometry of a Penrose tiling and the rhombus shapes that compose it are in the varied colours of the surroundings: multi-nuanced browns, beiges and greens. It can be interpreted in several manners:

This calotte extends to the boundaries of the property. It is, therefore, incomplete and the vertical plane that intersects it to the right of this boundary will house the new entrance and the emergency exits facing the parking zone. It is prolonged by a grassy truncated embankment connecting it to the natural surroundings.

The insulating membrane of this calotte can be realized in various ways—an entirely textile solution seems to be the most appropriate. It would consist of an insulation cover in three-dimensional textile whose rhombus shapes will be visible from the interior as well as from the exterior; certain of these elements will be transparent to take advantage of the natural lighting in the design, and others can be opened to the outside to modulate the acclimatisation and smoke exhaust.

Its structure is made up of small steel tubes of identical length with flattened ends to ensure economy of construction by bolting. Fine tended cables triangulate the ensemble. Perches topped by bundles of radiating bars, also in steel, support the dome at diverse and irregular points to act as weight bearers. For the engineer, it is a multi-lobed dome.

The structure of the existing building is slightly modified to allow for the construction of an additional level. This will allow for a continuous tour thanks to the two ramps for visitors with reduced mobility—one at the center of the star-shaped space and the other on the edge. The escapement of the exterior ramp leads to the idea of three tetrahedron pyramids emerging from the calotte and symmetrically situated in relation to the entrance façade that will enable ease of orientation when viewed from the exterior. The project deals with ease as to the existing building while providing supplementary exhibition surfaces and spaciousness. The lines of the Penrose tiling are also to be found in the flooring and serve to facilitate installation of scenography equipment.

This proposition enables a construction with minimal environmental and functional impacts. It is designed to maintain the functioning of the present centre during installation of the flooring slab and the foundations, as well as during the few days for the assembly of the pre-fabricated elements that compose the dome. The building and the construction site are entirely protected from the elements. The future exhibition areas, the areas for the construction site workshops and storage for the interior construction work (that are all “dry” construction methods) are thus protected.