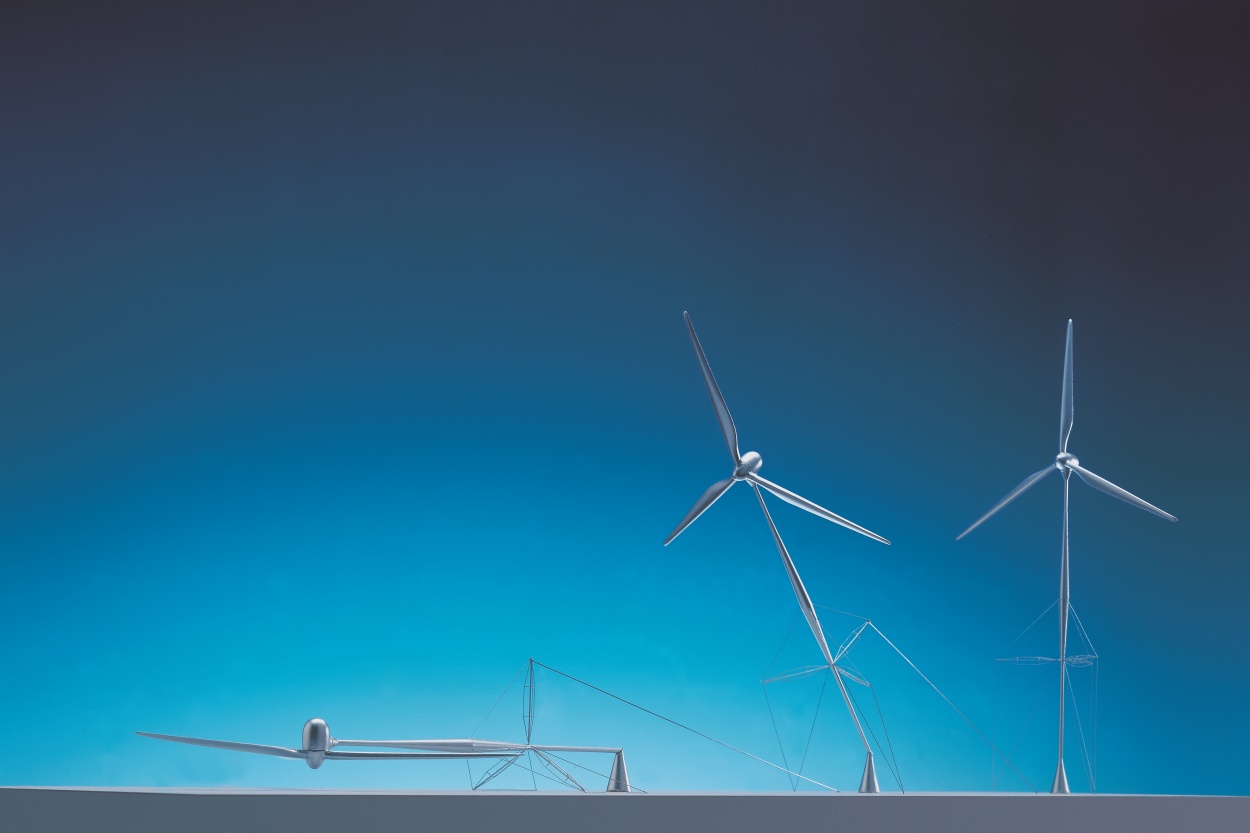 There is nowadays a certain contradiction between the aim of producing green energy with windmills, and the amount of material used for the construction of their masts and foundations, as well as the heavy equipment needed to hoist the turbines.

Masts and foundations consist typically of a large and heavy steel tubular structure, resting on a thick concrete slab sometimes supported by a large amount of piles.

The pollution of the ground by this important amount of poured in place concrete is a further burden from an ecological viewpoint. Finally, the massiveness of the shaft makes its imposing presence not suitable for every location.

Samyn and partners has been appointed by Group Fabricom, a major Belgian group involved, among others, in the electromechanical industry, with a wide range of experience in the field of power transport and tower fabrication, to develop a lighter and more ecological windmill mast and associated foundations. Using the volume indicator method, developed by Dr Ir Ph. Samyn, it has been possible to show that a very light configuration, even lighter than a classical guyed mast, can be obtained by bracing the mast just below the propeller with three pairs of studded cables, arranged under a 120° star configuration. The cables link the mast to the studs at 45° and vertically to the ground. Alternatively and to increase the torsional stiffness, each pair of cables may link diametrically opposed points on the largest diameter of the mast to the stud heads, and continue in a vertical trestle configuration to the ground. In each configuration, three additional cables link diagonally, and in vertical planes, the connecting points of the studs with the mast to the ground.

This morphology allows furthermore to raise the mast vertically, after equipping it on the ground with the turbine and the propeller, using the mast’s own bracing cables as pulling device. It suppresses the need for heavy hoisting equipment, also allowing the windmills to be placed in remote locations.

With a quasi hinge connection at stud level, a 100 metre high steel mast can be composed of two opposed conical sections with a maximum diameter of 3 m and a minimal diameter of 1 m, on top of a cylindrical shaft of 1 m in diameter, resting on a conical base of 6 m in diameter housing the electrical equipment. The 1 m diameter minimal section cannot be reduced , as it is intended to house the cables coming from the generator and the ladder zone. The shaft may now rest on a limited number of prefabricated prestressed concrete piles and the cables anchored on concrete disks composed of radial segments, loaded by the soil. For a 100-metre high 1,5 MegaWatt  windmill, the weight of the mast may be cut by half and its foundation system may easily be removed.

The stiffness, and thus the natural frequencies of these structures are comparable to those of a classical shaft.

Alternative schemes have been developed as the other one shown here where the bracing cable returns to the mast base. In this case, there are hardly any savings on the foundations, but a weight-gain is still obtained for the mast. This alternative configuration may be suitable for offshore floating windmills.

The system may also be used to heighten the tower and substantially increase the turbine power of existing windmills, then reusing their mast in pure compression, relieving it from fatigue induced by bending stresses, as well as reusing their foundations.

This study is being carried out on behalf of the Fabricom group which submitted an international PCT patent application on 2004-04-16, but then withdrew it in front of the lack of interest from the market.

The Italian national society of electric energy, ENEL, in collaboration with Legambiente, organized in 2001 an international competition for two wind-farms in the south of Italy (Cinisi, Sicilia and Pescopagano, Basilicata).

Instead of 15 small turbines of 0.8 MW planned by the client, the project proposes 5 turbines of 2.5 MW on top of high masts.

The project of Samyn and Partners was selected among the projects exposed in Rome for the meeting “Paesaggi del vento” of 2002-06-27.