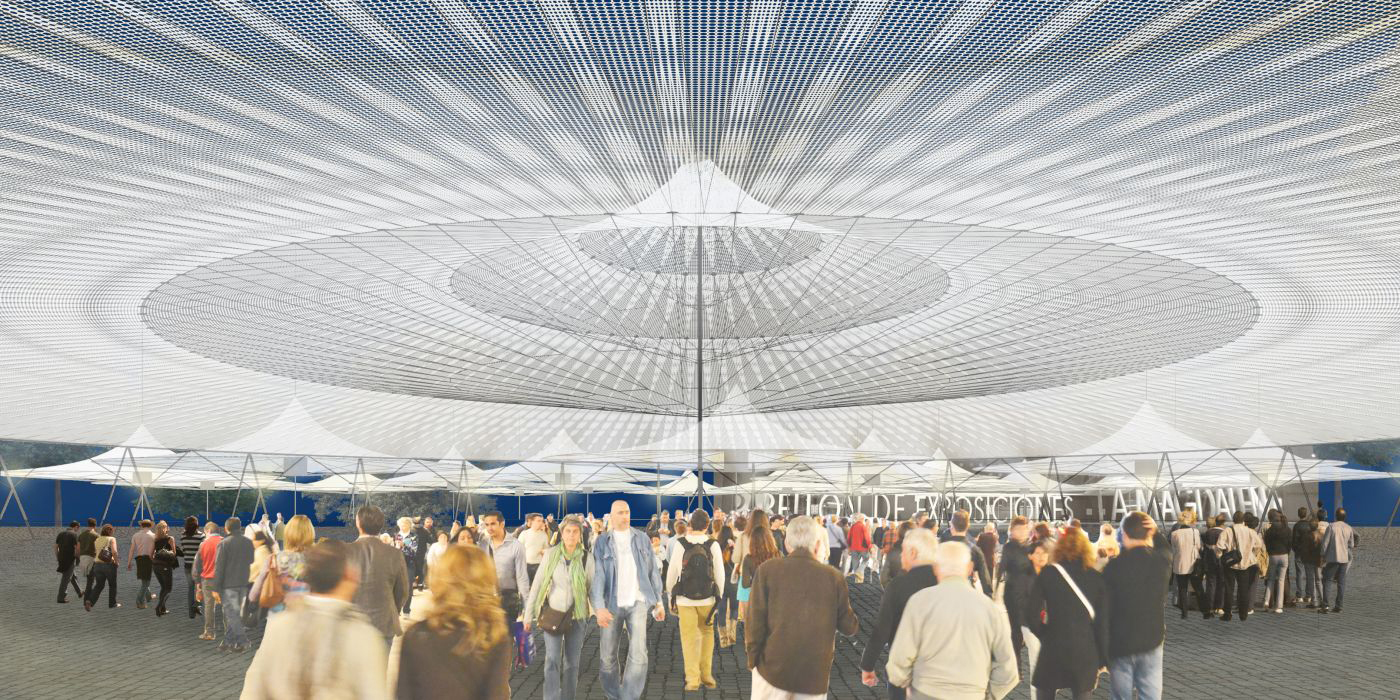 646 – A STEEL TENT IN A MULTIPURPOSE PUBLIC SPACE

The plan to create a steel tent to serve a multipurpose public space was discussed on 22 September 2017 during a meeting with Nicolas De Abajo at Arcelor Mittal’s research centre in Avilés, next to the steelworks and its blast furnaces.

The municipality decided it should be located at the southern end of the city on an adjoining 130m/side equilateral triangle, in the north, the “Pabellón de Exposiciones de La Magdalena”, so it could serve in particular, as an extension of the exhibition centre and a public market.

Made of extremely thin perforated sheets stretched between a central 15-m-high mast and a 73.322-m-diameter peripheral ring, the circular structure covers an area of 4,222.4 m². It rises 10 m above the ring, which is 5 m above the ground to allow access for trucks.

The rainproof cover must be sufficiently transparent during the day to allow natural light to penetrate and sufficiently opaque at night to allow artificial reflective lighting on its intrados.

The covered space must also offer thermal and acoustic comfort, be suitably ventilated and allow for protection against intrusion.

Towards this end, large drapes made of light and soft fabrics of fine stainless-steel mesh form a 5-m-high peripheral cone frustum at the base of the tent. They can be opened at will and, in addition to securing the site, allow air flow and temperature control in conjunction with the central skylight at the top of the mast.

In a closed position, in common with the tent, they are either transparent or opaque depending on the lighting effects. They can also be fitted with sound absorption panels.

Small white parasols 3 to 10m in diameter made of 0.3-mm-thick micro-perforated metal sheet, or of vegetable textile fibres, are suspended from the large tent and anchored to the ground. They cover, for example, the exhibition stands or market stalls established in the space according to the requirements.

The tent has the distinction of being extremely light. With a dead weight of 6kg/m², it has to be held on the ground to prevent it from flying away under the action of the wind when it is not, exceptionally, covered with snow.

The first, at the top of the central mast, consists of three rectangles and three isosceles triangles inclined between a high equilateral triangle and a low regular horizontal hexagon.

The construction begins with the 15.07-m-high central mast and the 36.66-m-radius basic peripheral circular ring, located 5m above the ground, also in S960 stainless steel and mirror-polished.

Made of a 150-mm-diameter and 15-mm-thick round tube, the mast is stabilized by scaffolding when the structure is assembled.

An equilateral triangle of square tubes measuring 160/160/10 mm and 1.2 m/side is suspended at the 13.85-m-level by three 30-mm-diameter cables attached to the top of the mast at a height of 15.07 m. It supports a glass pyramid with a triangular base that can be opened.

The base ring, made of 30-mm-thick metal sheet and asymmetric U-shaped (250 mm in the plane of the membrane with two right-angled returns equal to two times 150 mm), gutter-shaped, transfers the membrane’s tensile stress to the 32 supports located every 7.2 m along the ring (six 1.2-m net strips).

Stretched steel net bags containing compacted slag (from blast furnaces near the site) form the anchor, the foundation or both simultaneously, of these structural components.

The line generating their surface of revolution ensures their tension state in any load case.

Under the central mast, this therefore takes the form of a very flat biconvex lens, 6 m in diameter and 60 m³ in volume, either in compression, or in traction.

5-m-diameter “tomatoes” transfer to the ground the compressive force of each of the 32 peripheral studs, and 32 “drops”, 35 m³ each, ballast the anchoring cables while providing the foundations for the secondary needles.

The metal sheet strips are laid once the central mast with its triangle and the peripheral ring are in place.

Three first 38.182-m-long strips are suspended from the sides of the equilateral triangle at the top and attached to the base ring.

Five pairs of 12-mm-diameter cables, connected to the central mast, stretch the three strips to give them the shape of the six rectangles of each of the truncated pyramids and to stabilize them in the wind. Small 1.2-m crossbars temporarily form the short sides of the rectangles during assembly process.

The next three 37,984-m strips are then fixed at the top and in the bisector of the empty angles between the first (horizontal projection) to form the first truncated pyramid on a regular hexagon. They are like the preceding ones (and will be like the following ones) underpinned by the cable pairs.

On the bisectors and at the top of the empty angles between the six strips, and by filling them, six new 37.049-m strips are then fixed producing a vertical angle of 8° with respect to the preceding ones to form the second truncated pyramid on its base in regular 12-sided polygons and close the six three-dimensional angles of its hexagonal top.

The small assembly crossbars, which held the six strips in place, can now be removed and replaced by the permanent anchors for the first six cables to the mast. In the form of small irregular pentagonal pyramids (but with an axis of symmetry) made of 1.5-m-thick metal sheet, these anchors are placed on the top surface of the envelope to distribute the concentrated load of the cable.

Twelve 35.565-m strips and permanent anchors are then attached in the same way to the six strips followed by 24, 48 and 96 strips permanent anchors with 32.899 m, 27.932 m, 18.465 m wrap around distances, invariably at an 8° angle with the previous set, to form the following four truncated pyramids.

Two diagonal, symmetrical folds, formed in each new strip from the middle of its upper edge, define the two lateral rectangle triangles, which fit on the two adjacent strips of the previous series, and the central isosceles triangle between them.

The strips attached to each other on the surface of the rectangle triangles cannot therefore uniformly bear the circumferential forces balancing the radial forces to which they are subjected lengthwise in the case of a snow load.

The most important forces are, however, those of lifting due to the wind which are covered by the strips (towards the basic peripheral ring) and the radial cables (towards the mast) via the anchors in small pentagonal pyramids, with the latter also ensuring the circumferential balancing of the loads.

The shape of the truncated pyramid envelope generatrix depends on the angle between the first three rectangles of the hexagonal truncated pyramid with the vertical and the angle of the fold in the set of n strips where the next 2n strips are added. These angles are here, arbitrarily and provisionally, fixed at 35.264° and 8°.

Its optimisation, in order to ensure the most uniform possible distribution of stresses in the membrane in any load case, depends on the coverage of circumferential forces in the successive triangles and in the small pentagonal pyramids.

In the absence of these and in the case of an evenly distributed snow load, the generatrix would obviously take the form of a catenary under triangular load.

Finally, the facet-built envelope will deform elastically under stress, into a continuous surface with a negative Gaussian curvature, also transforming the small pentagonal pyramids into cones.

0.5-mm-thick and 1.3-m-wide ETFE film strips are then glued to the structure to ensure that the envelope is watertight. One hundred and ninety-two 18.565-m-long strips overlapping by 10 cm are therefore first of all placed radially from the gutter of the base ring.

The metal sheet with a 66.69 percentage of perforation and coated with ETFE film with an 85 % light transmission offers a transparency equal to 56.69 %. The resulting transparency of the envelope, given the overlap of the perforated sheets, is 45 %, which is comparable with the 60 % found in a traditional glass roof on a metal frame.

Night lighting, on the other hand, takes advantage of this 55 % opacity (much higher than that of a standard glass roof, which is only 15 %) as well as the mirror-polished finish of the metal sheet. The lighting of the underside of the envelope is therefore simply produced by 32 projectors placed halfway up the studs carrying the peripheral ring.

The opening skylight, pyramid on an equilateral triangle at the top of the tent, allows the covered volume to be ventilated by natural draught.

The surface of revolution of each small parasol is carried by a circular horizontal ring (its directrix), and a vertical central cable fixed to the tent and the ground. Both cables are made of stainless steel. The line generating the surface can be freely chosen provided it has a negative Gaussian curvature. It can thus take the form of a chain, a half parabola, a hyperbole, a cissoid or a Gabriel’s horn.

The ring is carried and stabilized by a stainless-steel cable structure, almost radiant, like the spokes of a bicycle wheel. The parasol is thus in equilibrium under symmetrical loads, including those for lifting.

Location:
Renderings:
Drawings:
646 - A STEEL TENT IN A MULTIPURPOSE PUBLIC SPACEMonday, May 14, 2018samyn