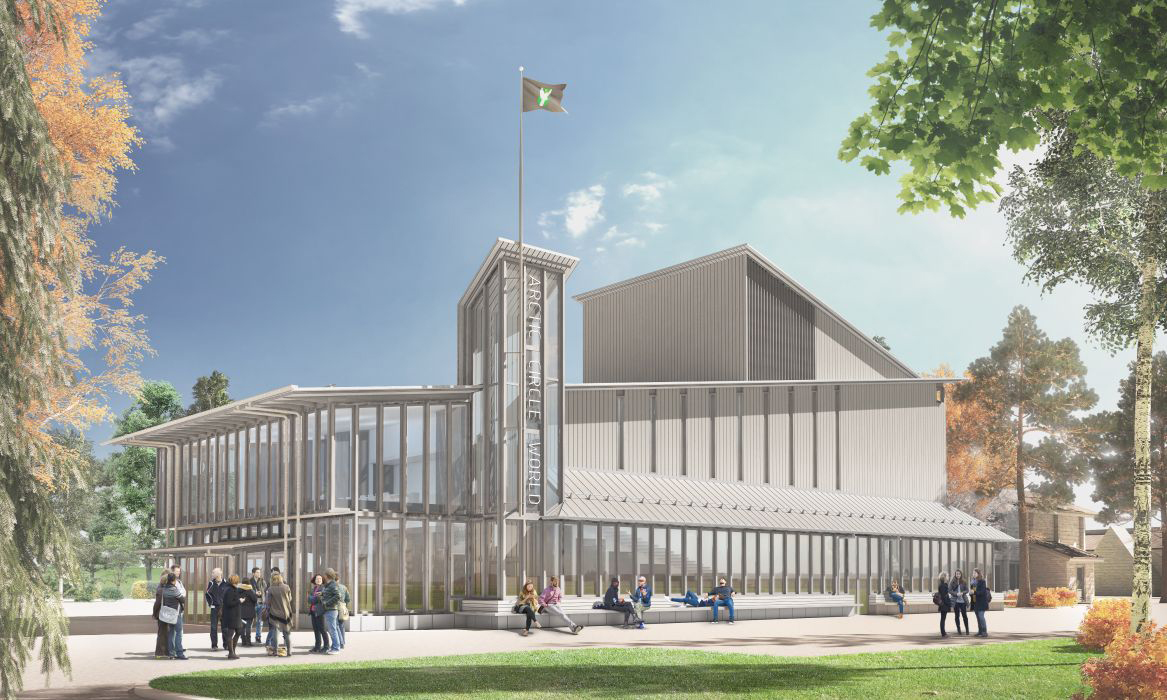 The city of Rovaniemi at the Arctic Circle, the Finnish gateway to Lapland, was razed in 1945 by the German army. It was rebuilt according to plans designed by Alvar Aalto, who also constructed several buildings, particularly dwellings, as well as the city’s arts centre, library, municipal office.

This small city of 58,000 inhabitants is well-known in that regard and is visited by architects from all over the world.

The northern lights, natural resources and log houses, together with the legend of Santa Claus, have transformed the city and its region into an impressive tourist destination.

The international airport has been hosting British Airways’ and Air France’s Concordes ever since 24 December 1984!

The Santa Claus Village opened its doors in 1996 and now serves more than 500,000 visitors a year.

There has been a steady increase in the amount of housing units and typical tourism services being developed, but there are still no cultural facilities.

Unique Entertainment Oy (douglaspashley.com) has been working on a show that combines Kalevala, popular poetry from Finnish mythology, with the legend of Santa Claus, and mixes real actors with virtual (VR), augmented (AR) and mixed realities (MR).

Hence the need for the construction of such facilities. These will comprise a theatre with a seating capacity of 448, a place for holographic experiments and a canteen.

Snowball is due to premiere at Christmas 2019.

The harsh climate is exacerbated by the dominant North/North-East winds.

The architecture is also taking shape in the light of the snow cover, hence the importance of taking account of snowfalls, which can reach up to 1 m within a few hours:  the roofs therefore need to be able to support 200 to 300 daN/m², and it is prudent to provide storage areas to deal with snow sliding off the slanted roofs and landing at the foot of the buildings.

The village is made out of irregular and crooked-shaped wooden buildings. Their gabled roofs hinge on both sides of an irregular main driveway winding amongst century-old conifers.

The site earmarked for the theatre is located to the East of the village and to the South of a wide branch of the driveway. It is surrounded by low one-floor buildings and splendid trees on its East and West sides.

Along the eastern and western land borders, two 5 m-wide strips subject to a building ban are also earmarked for snow storage.

Its southern and western sides are also visible from the main square of the village, in line with a short perspective.

The theatre is first drawn in autumn 2017 on the basis of the first town planning rules received. It is composed of two main volumes aligned on two interlocking rectangles. The first rectangle (16 × 33 m) is parallel to the slanted western boundary of the land, whereas the second one (22.6 × 33 m) is aligned on the North, South and East building boundaries.

The main volume is inscribed in the first rectangle, in the perspective of the village. It comprises the lobby, a canteen / event room on the first floor, as well as the partially buried area comprising the auditorium, the stage and the decor tower. In order to mitigate the visual impact, the main volume is partially buried and covered with a gabled roof, whose apex peaks at 11.5 m above the stage curtain. The West slope of this roof drops to a height of 5.5 m above the entrance facade, whereas the East slope drops to a height of 7 m, above the back of the stage. These two latter facades face the two green areas of the plot, which are also used as storage areas for the snow sliding off the slanting roofs.

On the North, East and South sides, the main volume is bordered by lean-tos inscribed in the second rectangle. The edges of their sloping roofs, all horizontal, follow the alignment of the façades along the boundaries of the plot, at a height of 2.4 m. These lean-tos house the utility premises for the main volume, while constituting a human-scale foreground, whose height is mainly a reflection of the functional requirements.

It turned out in autumn 2018 that the urban planning rules were not correct, which made it possible to redraw the building with much simplicity in a single rectangle on the southern alignment of the pierced stone while retaining the principle internal organization and shed.

The wide eaves on all the roofs, besides protecting the facades, help to provide the building with a human dimension.

The significant amount of snow cover also calls for a 75 cm-tall platform at the foot of the building, shaped as a stone bench.