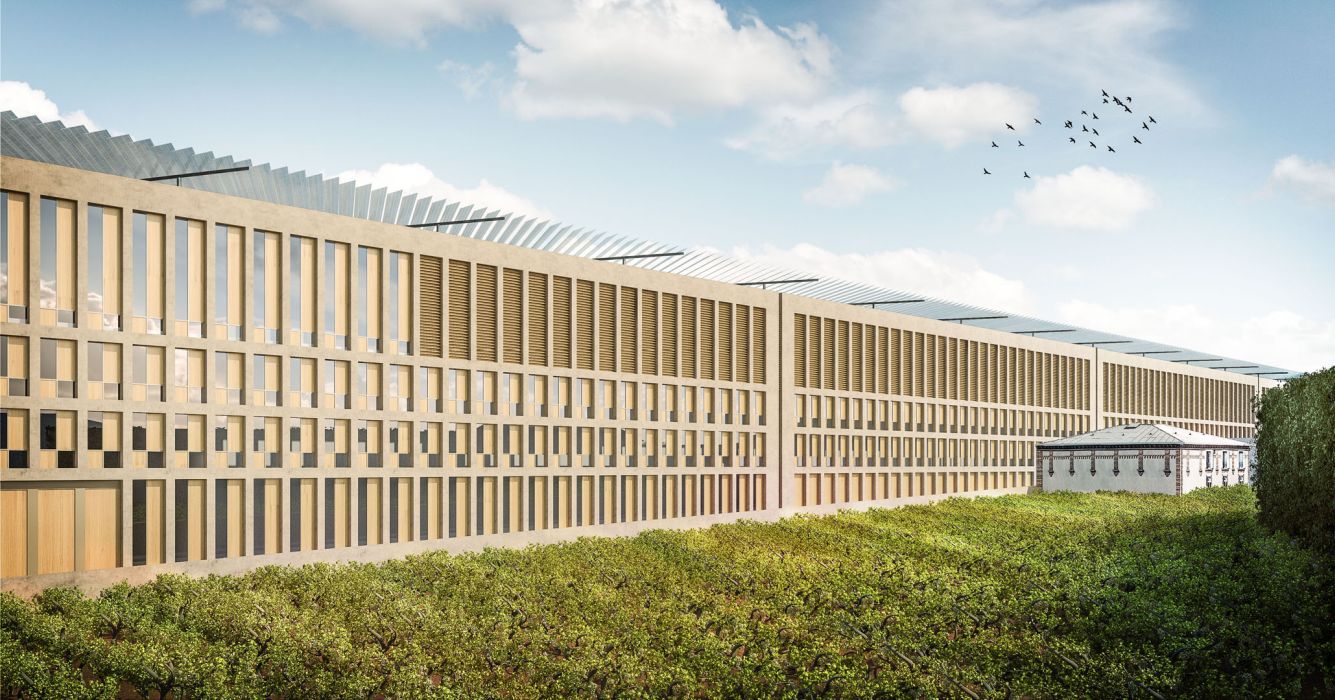 Founded in 1772 (prior to the French revolution!), Veuve Clicquot Ponsardin (VCP) is acknowledged as being an important part of French heritage.

This prestigious champagne company enjoys an international reputation, while its wine is sought after all over the world, especially in Anglo-Saxon countries and increasingly in major cities. VCP is therefore a cultural ambassador for France and is developing its assets accordingly.

The focus of this attention, both in cultural and industrial terms, its historical site attracts visitors from all backgrounds and cultures. It is also firmly established in Reims, where it is seen as one of the city’s pride and joys. Its status as a tourist attraction has earned it a brace of Michelin Green Guide stars for its cellars.

The site’s industrial development is therefore an exceptional opportunity for Veuve Clicquot to assert its role, both in the oenological sector and in the city of Reims, therefore showcasing its two-star credentials above ground and in the new fermenting room.

The company’s prestige goes hand in hand with the cautious approach the entity has adopted for its industrial management process to ensure its development is consistently in keeping with environmental issues and with the progress in the NBIC (neurological, biological, information and cognitive science) fields, which form the basis of the third industrial and social revolution.

VCP is recognised for its commitment to sustainable viticulture. Environmental concerns are behind the decision for the industrial expansion to be rolled out on a nearly zero carbon and energy basis.

Progress in the NBIC fields not only provides a greater understanding and knowledge of the living world (including oenology) but results, inter alia, in further movements towards robotisation. Robotised automation points to the need for a better understanding of the phenomenon generally and a constructive dialogue with civil society as a whole.

As a driver of images, architecture is therefore duty-bound to pay attention to these questions, while seeking to communicate the generous, discreet and luminous quality of Veuve Clicquot champagne.

The proposal aspires to confirm VCP’s identity and prestige as a result of its close attachment to its historic site in Reims, concentrating its development project at this location, without having to resort to an external one.

All industrial investment projects now have to take account of the environmental implications as a major factor. In particular, the human impact on farmland has become a major social and political issue in France.

Environmental and landscape protection, ecological and energy transition and the development of agricultural land rank alongside economic competitiveness.

Hence the proposal to develop VCP at its historical site to avoid the disposal of farmland on the outskirts of the city.

The study shows that the expansion of the business at the current site is not only physically possible and desirable, but also viable.

Enhancement of the historical site

Industrial activity has so far been fully developed at the “north” site, thereby allowing scope for expansion at the “south” one.

The listed historical brick buildings on the first site along rue Albert Thomas are restored.

The “Reims white stone” architectural concrete facades of the new buildings on the second one reflect this.

Otherwise, the historical Crayères north site, including the shell of the current fermenting room and the extension of the decanting facility, is entirely returned to the status of green areas (Virginia creeper on vertical surfaces, vines on the ground).

The “south” site is bordered to the south-east by a residential area, to the west by the city cemetery and to the north-east by a green area.

The 14-m slope between its high point to the north (altitude 100) and its low point (altitude 86) provides the possibility for new structures (whose higher level peaks at 114) on the southwest side of rue Albert Thomas in keeping with the major urban perspectives, including that of the Abbey of Saint-Remi.

Nor do their building outlines interfere with the other altitude limits: those of the airport and those shown on maps of the Reims local urban planning scheme. They also comply with urban planning setback rules.

The site is gradually transformed, offering a “finished” face at the end of each construction phase, thus avoiding the feeling of “living on a building site” for residents, visitors and staff alike.

In its final phase, it offers a new landscape approach, in harmony with the city’s urban planning approach and, in general terms, with the environmental requirements promoting VCP’s (inter)national reputation.

Mobility is substantially improved thanks to the compactness of the installations. The flow of heavy and light vehicles converges in the centre of the site, directly connected to the motorway network without creating any negative effects for the immediate residential environment. The current inner road on the southeast flank of “Crayères north” is therefore made available to the public.

The proposal takes the form of a “vertical’ plant” (on four levels), which is much more compact and sparing in terms of land area than the ‘horizontal’ plants which have been the norm since the end of the Second World War.

A significant amount of farmland is saved: in addition to the 12 hectares planned for a new site on the outskirts of the city, 4.45 hectares can be assigned a new purpose at the site itself (for vineyards, ….).

The multi-level distribution of work surfaces involves the use of vertical transport. New intelligent synchronization technologies mean more seamless freight transport operations than is the case when goods are carried by truck to a decentralised production or storage unit.

Large below-ground areas provide free cooling facilities for work and storage areas where the temperature must be limited.

All the working surfaces, even the below-ground areas, are illuminated and ventilated naturally thanks to the large basement window wells.

The project for Crayères south comprises:

The main entrance is located to the south of the long block to the right of the fermenting room and next to the lifts coming from the car park.

Only the current fermenting room and the decanting facility, as well as the “historical” buildings freed up from any industrial activity, remain at “Crayères north”.

The rest of the site (nearly 8.2 ha) is reassigned to vineyards. This provides 4.45 ha of green area (more than half of the site), 1.5 ha of canopied photovoltaic roofing in the car park, with the watertight roofs and areas occupying only 2.25 ha.

At the “south” site, the new fermenting room is located at level 86, (the lowest), on the same level with, in the long block, the first level of cellars, the drawing and the transfer facilities, as well as the connecting gallery towards Crayères north.

Underground, level 93 houses the remaining cellars, the delivery bays for empty bottles and the storage area for empty cases. Any reduction in the storage requirements as a result of concentrating activities at the site makes it easy for the cellar area to be extended.

Level 100 houses the covering and wine area, as well as the shipping bays. It is bordered by offices and social amenity rooms at levels 100 and 103.50.

Finally, level 114 houses, under a photovoltaic parasol, the car park, accessible through a two-way ramp bordering the listed wooded area to the west of the long block.

A site analysis reveals a regulating layout, with original and unsuspected force trajectories, which should also be used in relation to the direction of the sun and the prevailing winds.

The residential areas to the south of the site are thus neither affected by prevailing winds nor in the shadow of new buildings, nor are they disturbed by the new traffic flows they will generate.

The scenario is illustrated by the sun path diagrams, both in terms of lighting (lux) and solar and energy gains (kWh/m²/year), as well as the wind rose, drawn up for the site.