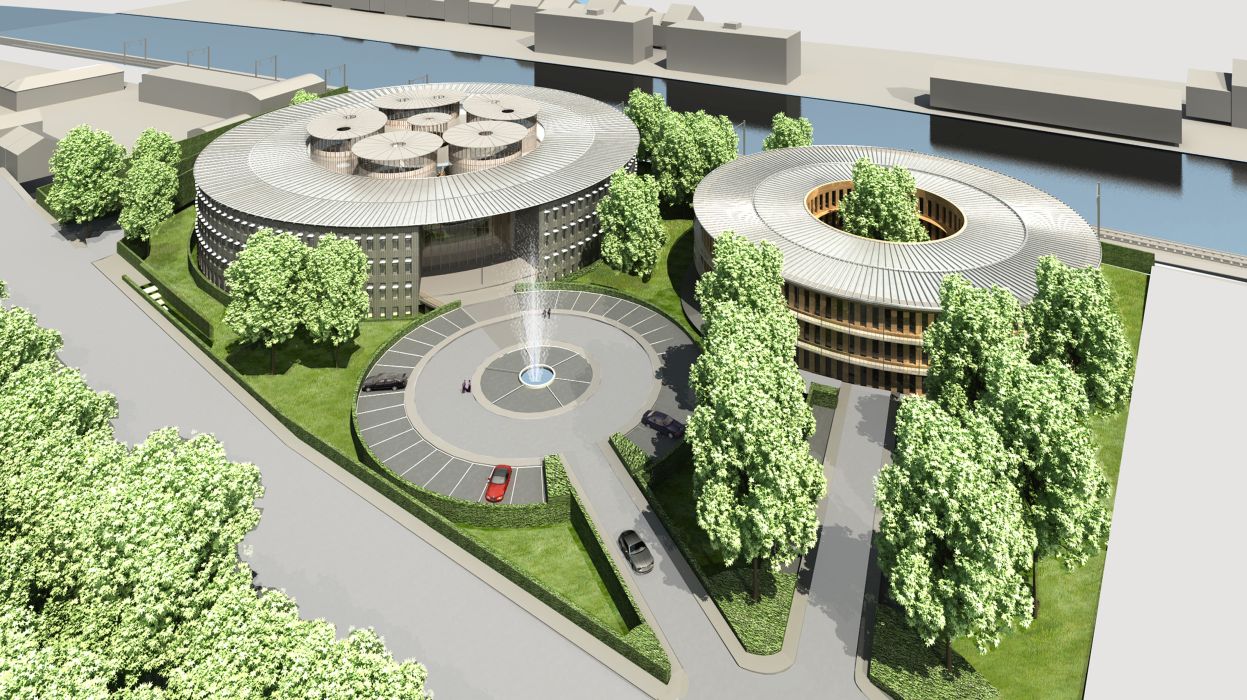 520-Palace of Justice and Ministry of Finance

Implantation and integration in an urban context

This beautiful site on the banks of the Meuse river benefits from an excellent orientation that allows for public access to the Palace of Justice from the south and the Ministry of Finance building from the southwest. The buildings, situated on adjoining lots, are irregularly shaped and no formal visual connection is possible. Finally, the view towards the Meuse is splendid from this site, and the entire complex must act as a discrete beacon of the entrance to the historical centre of Bouvignes.

These considerations lead us to propose two cylindrical buildings accessed by curvilinear paths further accentuated by an “English Garden” treatment of the landscaping. The ensemble thus discretely integrates with the character of the environment.

The five hearing rooms of the Palace, also cylindrical in their oval or circular floor plans, are situated above the central hall at the heart of the building. Other services are located in the exterior surrounding ring of the building.

The curvature of the buildings plays an important role in attenuating visual disturbance in the surrounding landscape. The sun’s rays flow along the outer walls, in zinc for the Palace of Justice and in wood for the Finance Ministry, thus limiting the effect of back lighting on the facades.

The rigorous orientation of the north-south access, in addition to its symbolic character, gives the building the role of a tri-dimensional sundial accentuated by the tight rhythm of the vertical window panels whose width varies, according to orientation, from 68 cm on the south to 113 cm on the north.

A perspective, framed by the two buildings, gives onto the Meuse from the circular island at the entrance to the Palace of Justice

Even though the Palace is situated on the major north-south axis, its size and its implantation does not impose on the Finance Ministry, which communicates its own unique identity and benefits from an autonomous perspective.

Particular attention is paid to respect for the natural relief of the site in order to avoid virtually all importation or exportation of soil. The plot is simply “smoothed out” to eliminate the more abrupt areas.

Earthen walls, reinforced with geotextiles and vegetation, protect all the vertical inclines.

Special attention is paid to the visibility and security of use of access.

520-Palace of Justice and Ministry of FinanceFriday, May 9, 2014Filippo Aimo