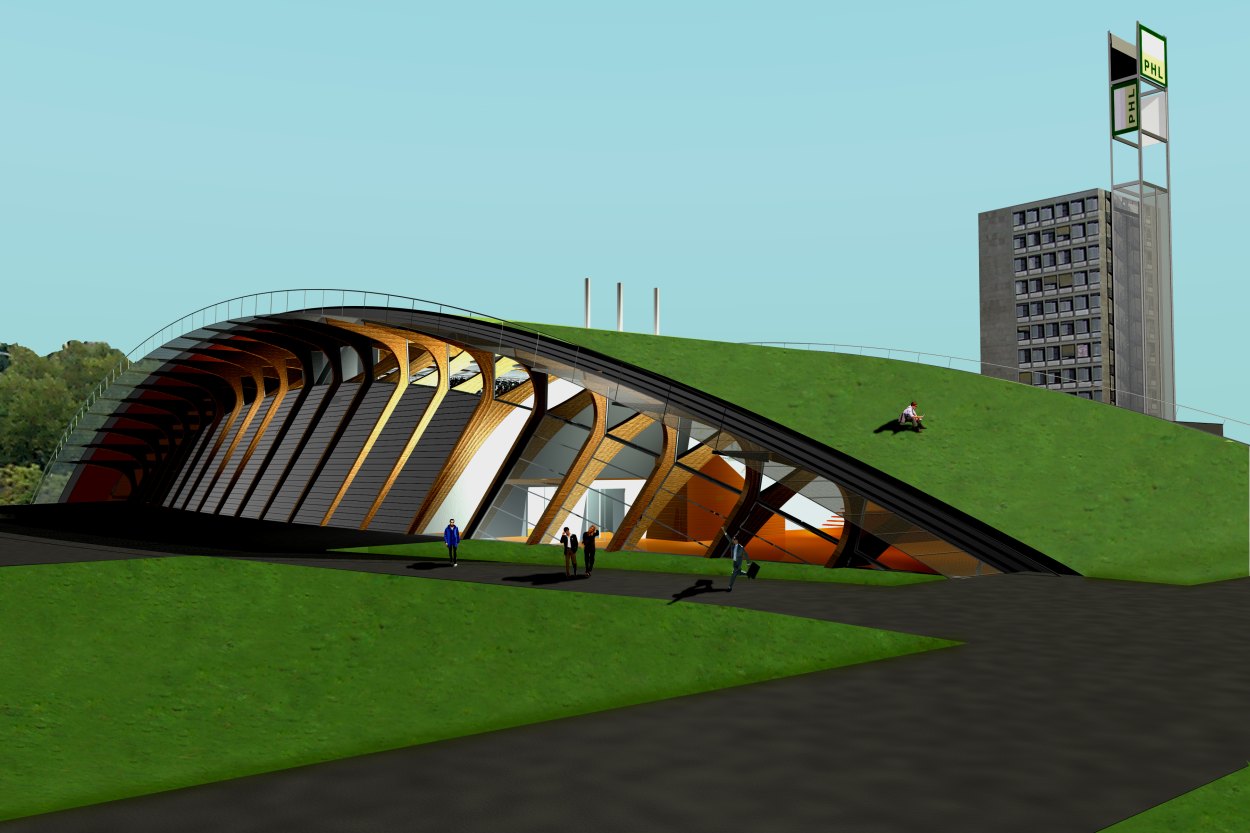 400-Auditorium for the Limburg Provincial College

The project of a new auditorium and related facilities for the Provinciale Hogeschool Limburg (Limburg Provincial College), situated in a place of higher education, aims to expose essential values to the student community. In architectural terms, this aim translates into a special attention paid to the durability of the construction and its respect for the environment through the use of high-quality materials, easy maintenance, energy-efficiency and respect for the future generation’s desire to shape their environment. The building must therefore offer the possibility to be entirely dismantled and must be made of reusable materials.

The structure is composed of 21 identical wooden porticoes following a radial geometry. The composition allows to span over the 95 metre-long and 35 meter-wide covered surface in a single gesture. The floor’s bearing structure is made of wooden beams laid in juxtaposition to one another on a concrete pile and beams foundations system.

The central part of the building shelters the primary function, i.e. the auditorium and its podium and backstage facilities, in direct relationship to the main entrances on each side. The lobby is located in the south-western part, in the vicinity of the existing restaurant and cafetaria. The event-space, a space dedicated to student life, is located in the north-eastern part. For acoustical and functional reasons, it is separated from the central auditorium by a covered external passageway which ensures an easy service access to the auditorium.

Apart from the central section which is blinded for functional reasons, the lateral facades of the building are fully glazed to allow maximum daylight penetration and stimulate visual and social interaction between the inside and outside.

The project also aims to capture the spirit of the place and generate a users-friendly work, life and study environment, bearing its own identity within a greater whole.

At city-scale, measures are taken to divert the transitting traffic towards the larger city incoming axis in order to relieve the local green area. The Elfde-Liniestraat, main axis through the campus, is forbidden to all traffic with the exception of the Hasselt free public transportation. The Vilderstraat, bordering the site on the north-east, is turned partially into a one-way street to prevent its use as alternative route to exit the green boulevards. Attention is given to maintain  the accessibility of the existing parking lots.

At local scale, the creation of a bridge over the river Demer, which borders the site to the south-west, generates a direct link between the site and the bicycle- and pedestrian-lane which runs along the river on the other side. A new landmark is also created for the reorganised neighbourhood by covering the external stairs of the student tower with expanded metal sheets lit from inside. This tempered light column is crowned by a new logo proposed for the institution.

As the tower acts as landmark for the neighbourhood, the new auditorium sits within the inner area of the campus as a church in the middle of a village.  The former sports fields, a large empty land no longer in use, are transformed by the position of the new auditorium into a succession of spatially qualified squares, patios and gardens that restore the pedestrian scale on the campus. A main square is set at the centre of the area between the new auditorium, the existing restaurant and a planned cafetaria. It is intended as a place of informal meeting between students, professors, visitors and staff.

The gentle sloping of the grass roof, in continuity with the existing ground, offers an original place of rest and leisure. It provides the surroundings of the building with a recovered freedom of movement that enriches pedestrians journeys with new views and altogether more exciting scenic routes. It also emphasizes the green character of the site by presenting a gentle sight to the neighbouring buildings, and stresses the connection with the Kapermolenpark, across from the river. Additionally, the grass roof provides the building with a highly efficient thermal and acoustical insulation which makes mechanical cooling obsolete. Its arched shape lessens the blinding effect caused by reflection when the sun is in the back of the passers-by and reduces cast shadow when the sun faces them.

Art is considered an essential element for the appropriation of the building by the art student population it addressees. The simple, open design of the site allows for a wide range of possibilities regarding the integration of a lively open-air art collection within the site. The « Piazza » in front of the auditorium can be used for open-air sculpture while the roof and the green areas on either side are ideal for Land Art interventions. A rich and stimulating mixture of masterworks and experimental student work, of permanent exhibits and temporary installations can be generated.

The opaque sides of the auditorium can be used for frescoes or as support for projection. They can provide an adaptable background to a wide range of performances taking place on the Piazza while the stairs are turned into open-air seating.

Mediawalls are integrated in the lobby and event-space to inform the public about the current events and provide yet another medium for video and digital artwork.

400-Auditorium for the Limburg Provincial CollegeTuesday, May 20, 2014Filippo Aimo