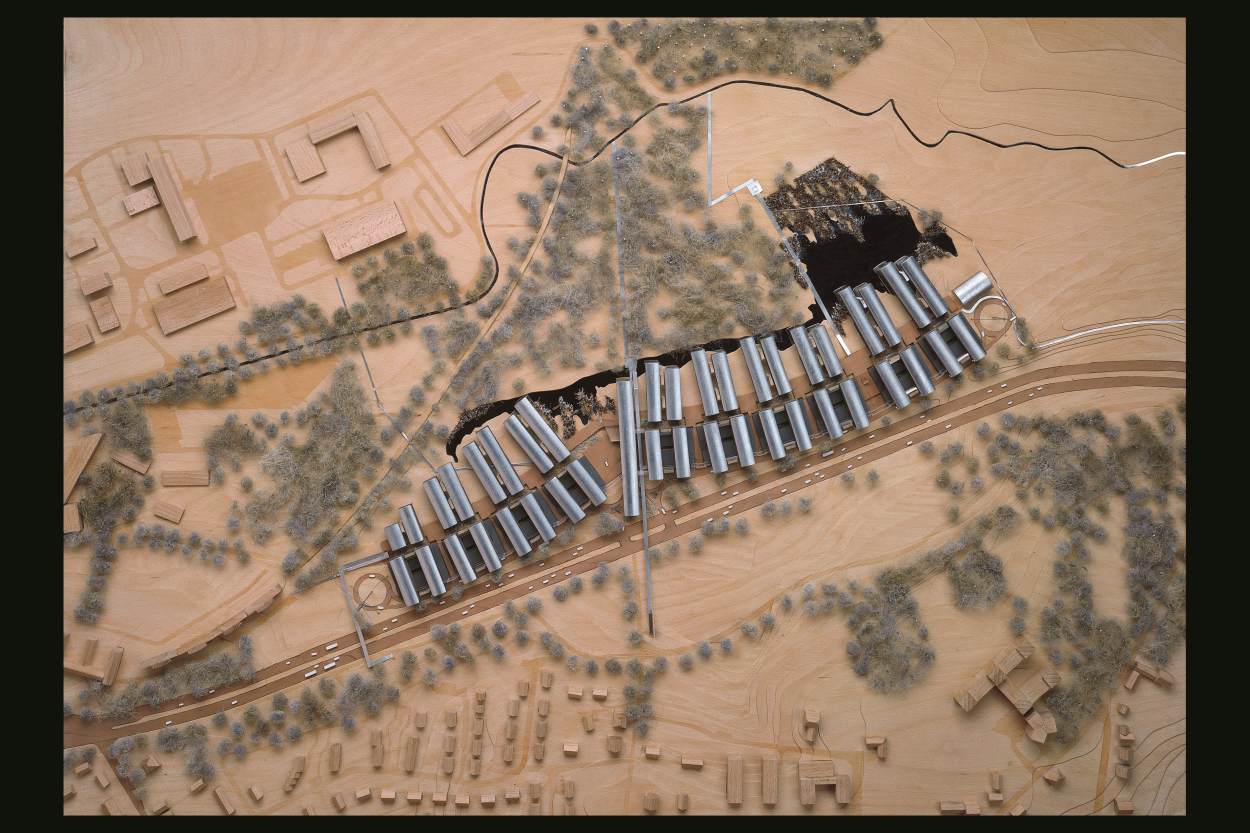 The site of the new scientific park is located west of Leuven along the Boudewijn avenue, a main access road to the old city center, in a hinge position between the Termunckveld, a developping working area, and housing extension sites. Playing a central part in this densifying suburb expected to provide work to 12.000 people in the long-term, the new development needs to offer a definite urban character while preserving the high ecological value of the Arenberg park, the green area it is a part of. It is conceived as a linear research and educational field divided in three layers of decreasing densities between the Boudewijn avenue and the green area.

Along with their ecological value, the site and the surrounding areas still bear historical features than can be traced back on old maps up to the 18th century and beyond. The project is therefore conceived in such a way as to make as light an impression as possible on the land and to integrate as much as possible of the existing landscape components : paths and an old trainberm are used for pedestrian and bicycle traffic, a former irrigation canal is repared and used as stormpool.

At the intersection of the Boudewijn avenue and an existing trail servicing the innerland, a two-level egg-shaped roundabout connects the circulation of the site to the city’s road network. This main entrance is stressed by the Interleuven building, an elongated block that steps out of the otherwise regular allignment of the new facilities, while one of the two pedestrian and bicycle footbridges connecting the site to the opposite neighbourhoods crosses the Boudewijn avenue alongside. A green buffer protects the park from the acoustic burden of the dense vehicle traffic. Behind the buffer, two roads looping between the site’s main access and two roundabouts located at its ends provide public vehicle access to the high-density strip of buildings. Parking, delivery and waste disposal areas are located in their base and can only be accessed by vehicles on this north side. Parallel to the vehicle roads and deeper into the site, a pedestrian and bicycle wood-surfaced lane, the « ramblas », is the lively public spine of the complex. It is bordered on the north by shops and services located on the lower floor of the high-density office blocks. Sports facilities can be accomodated underneath the Ramblas. On the south, a canopy and a transparent façade protect the users during heavy weather. Perspectives open onto the landscape, framed by the lower-density office and research buildings. The latter are built on piles in order to keep the landscape as free as possible.

In regard to the need for flexibility, the architecture of the buildings is essentially conceived on the basis of a modular system. The vertical modulation is based on a 1.80 m module, the floors being either 3.6 m or 5.4 m high depending on the functional requirements of the facilities they host. The horizontal modulation is based on a grid of 7.20 m by successively 4.80, 2.40 and 4.80 m, allowing for a central circulation strip to be fitted within the building’s modular grid.

Materials and equipements are chosen for their environmental value : materials whose lifecycle ecological cost is as low as possible and that can be recycled, construction techniques allowing dismantling in the future, and equipments such as solar panes on the roof, energy piles in the foundations, and a system to collect rainwater and supply the sanitary cores with it.

Located in the roundabouts at the ends of the site, two windmills can provide electric power while acting as landmarks to the scale of the city.

The existing greenery is preserved. Additional plants and trees are planted to contribute to the climatic comfort of the complex.