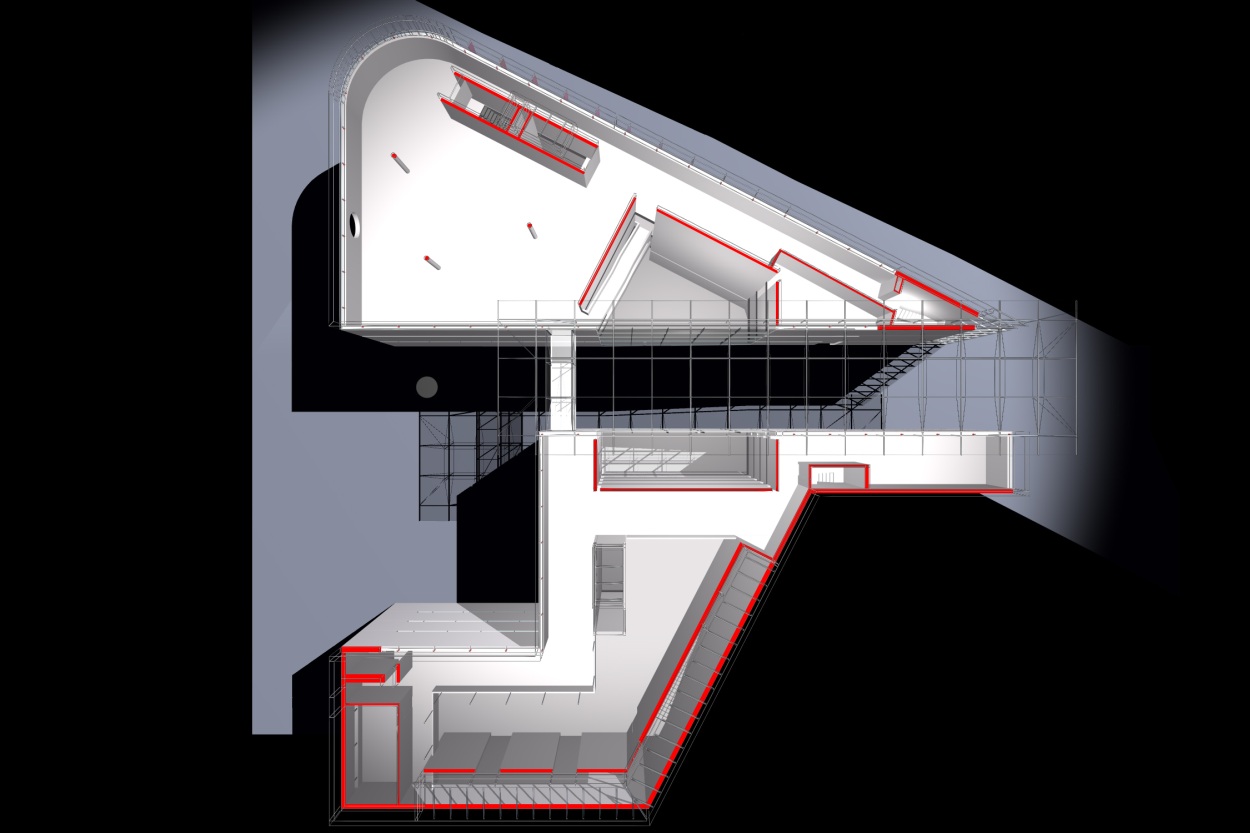 376-Museum of the dialogue (Catholic University of Louvain)

The Catholic University of Louvain (UCL) wishes to extend its museum located in the Descamps building, where the current museum collection is presented on only 1.400 sqm of exhibition space. The UCL would like to see it extended to about 4.000 sqm, which is not possible in its existing location.

The center of Louvain-la-Neuve is mainly pedestrian. It is built on two levels of car park infrastructure, the second basement level also being dedicated to vehicule circulation.

Particular attention was paid to the museum promenade. The main entrance is located in the’Triangle’-wing. On the side of the Grand Place, the entrance is distributed so that access is possible from both “Rue de I’Hocaille” and “Rue Raymond Lemaire”. Each wing hosts an atrium stretching over all levels, and is provided with deambulatory stairs, part of the museum promenade, as well as two safety stairs at the extremities of the buildings. In the “Triangle”-wing, the atrium houses the deambulatory stairs, while in the “Boot”-wing, they are located under a glazed roof that creates a slit of light alongside the parting wall with the cinema complex.

Springing across the exterior gallery on the top level, a clear glass-encased footbrige connects both wings and completes the loop that, from the first basement to the roof, allows visitors to freely organize their visit without backtracking.

The ceiling height of all the levels is 405 cm in the “Triangle”-wing, and 540 cm in the “Boot”-wing to allow the introduction of mezzanines in order to create different types of exhibition spaces. Providing the zenithal lighting necessary to the exhibition surfaces is achieved by creating a thin strip of horizontal openings at ceiling height along all facades. To offer visitors occasional distraction from the exhibits, views to the ouside are provided through the atria on the “Rue Raymond Lemaire”, and through the three large bays that look out towards the lake.

The work spaces – offices, studios and the library – are distributed over all levels to provide good surveillance without the need for additional security. The windows in these spaces are placed at a traditional working height with a parapet of 85 cm height. The facade on “Rue de l’Hocaille” is further enlivened by a large (shop)-window in order to animate the street.

The “Rue Raymond Lemaire” is covered by large glazed roof which joins the two wings, protects the glazed facades of the atria, and shelters the area leading to the main entrance of the museum.

based on a text by Philippe Samyn and Pierre Loze.

376-Museum of the dialogue (Catholic University of Louvain)Wednesday, May 21, 2014Filippo Aimo