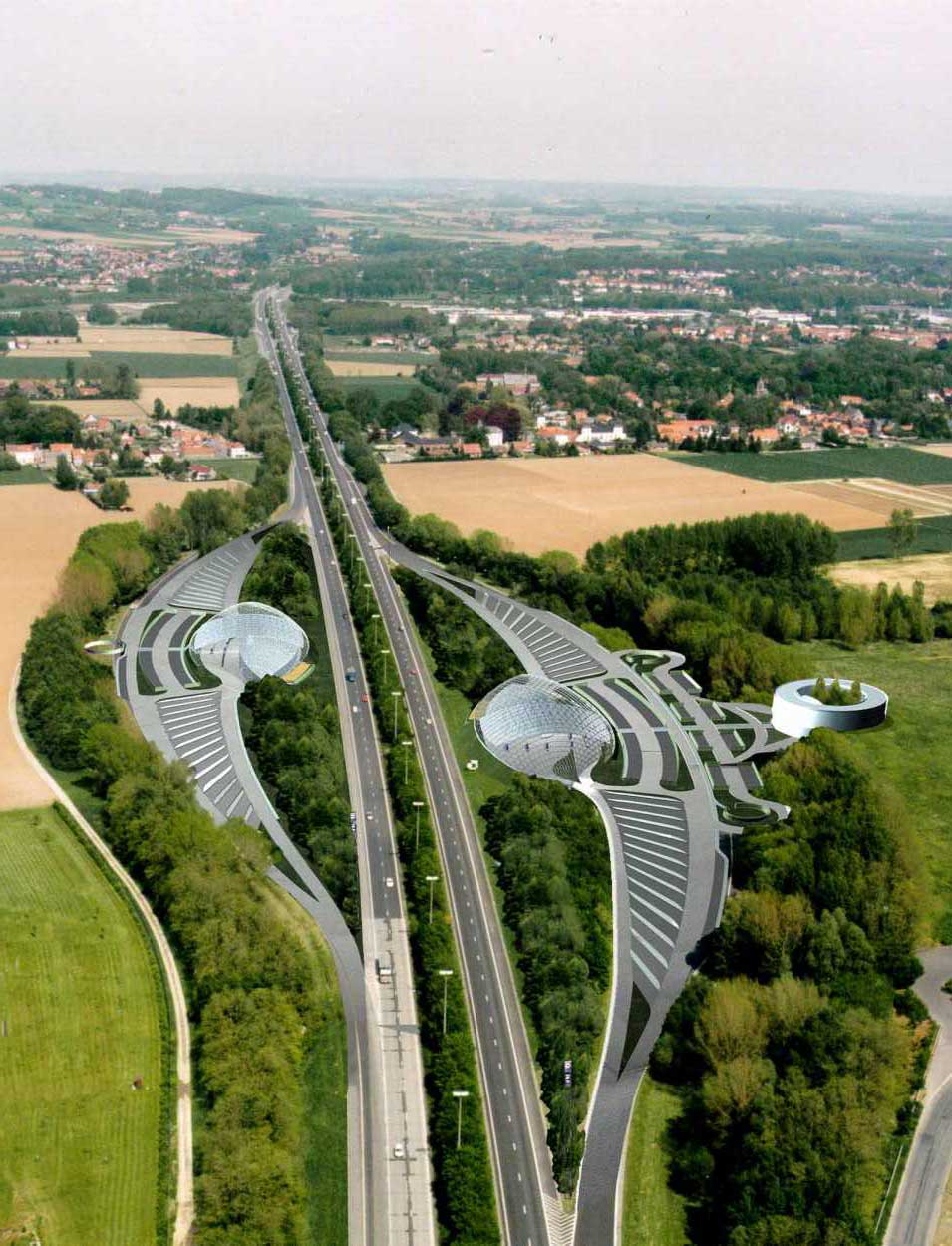 The simple shape of the petrol stations conveys to this recreation area the image of a signal that marks in a soberly manner the entry to Wallonia which lies in the southern part of Belgium.
The organic architectural shapes interact freely with the vegetation and landscape.

The parking areas, with their curves, which are integrated with the outline of the existing highway, offer parking spaces accessible before and after the station, thanks to their radiant geometry.
This allows the drivers to organise freely their stop on the area.

The station itself is conceived so as to offer a microclimate to the users and to shelter them from the wind and sun. The concept of an expanded metal windscreen is developed in this case in three dimensions. The station is covered by a permeable steel shell that slows down considerably the speed of the infiltrating wind, while at the same time it gently sifts the light. The structure of this shell is built on a series of transversal arches made out of small diameter steel tubes. Standardized metal frames, whose rods are all of the same length, are welded onto this structure. Within these frames, a woven metal latticework is attached.

The whole shell is placed on a set of banks creating an intimate atmosphere in the station. They are interrupted in two places to allow on one side the pedestrian entrance from the parking lot, and on the other side an access to the terrace of the restaurant.

Vehicles enter and exit the station underneath two angled arches that support the structure unsymmetrical.

A corrugated steel waterproof roof, suspended from the shell, covers the whole service area of the station.

The reception building, partly glazed, is integrated architecturally into the whole. Its steel roof follows tightly the curved shape of the shell and service area cover.

The shell filters light during the day and creates a softly lit dome during the night, which prevents to glare the cars driving along the highway.

The reception building contains a shop, service areas and a restaurant. These functions are organised around a central hallway. The shop’s attractive main feature showcase is oriented towards the service area.

A regional display cabinet is also installed in the hallway at the crossroads of the entrances of the shop and the restaurant. The restaurant opens onto a terrace, offering a clear view towards the landscape through a break in the embankment.

On one side, the building of a hotel is planned, with its reception area opening the embankment of the industrial zone on the axis of the station. The hotel consists of two ring-shaped levels, with one quarter of its area facing the station and housing common facilities and the remaining three quarters of its area being allocated to the rooms.

The reception on the ground floor is at station level, while the restaurant is situated on the upper level and opens onto the interior garden; and finally the bar and the conference room are located on the second floor.

The volume of the restaurant pervades in the calm interior space of the garden, with its roof used as a terrace for the bar and meeting room.

The rooms, facing outwards, are serviced by a common hallway surrounding the garden with its glazed façade.