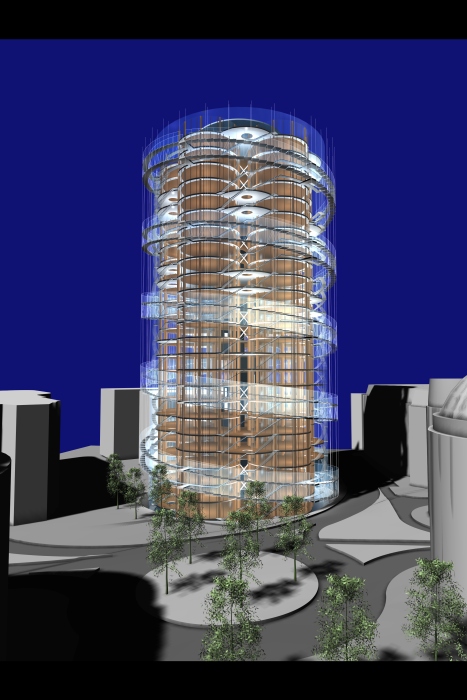 This is a proposal for a 25 levels tower in the centre of Brussels (BE), completely made out of wood. Each level is composed of 5 decks of 13.50 m in diameter forming a corolla around a central area of the same dimension. Each deck is designed as an inverted shell which transfers tensile stresses on a peripheral ring in compression, which in turn is supported by ten columns.

Bracing is ensured between the 5 petals located around the heart. Each cylinder is wrapped in its own wooden framed glass façade. The whole building is set in a cylindrical envelope with an external diameter of 41.20 m, made of a simple safety glass mounted on stainless steel frames.

Two superposed helicoid ramps wind their way up at 1 metre’s distance from and around the external glazed skin, which regularly lead to each level from opposing ends. These ramps are intended as emergency exit passageways, but they also allow people to wander, by foot or on the back of a mule, up to the top of the tower, thus renewing with the urban conviviality prevalent in ancient towers. Five duplex lobbies, set in an inverse spiral movement with respect to the external ramps, are located at every five levels and are served by glazed double deck cylindrical lifts. Sanitary cores occupy a part of the central circle and are shifted 72° at each level by pivoting them around a large cylindrical and axial service shaft. This arrangement allows daylight to penetrate deeply in all useful areas.