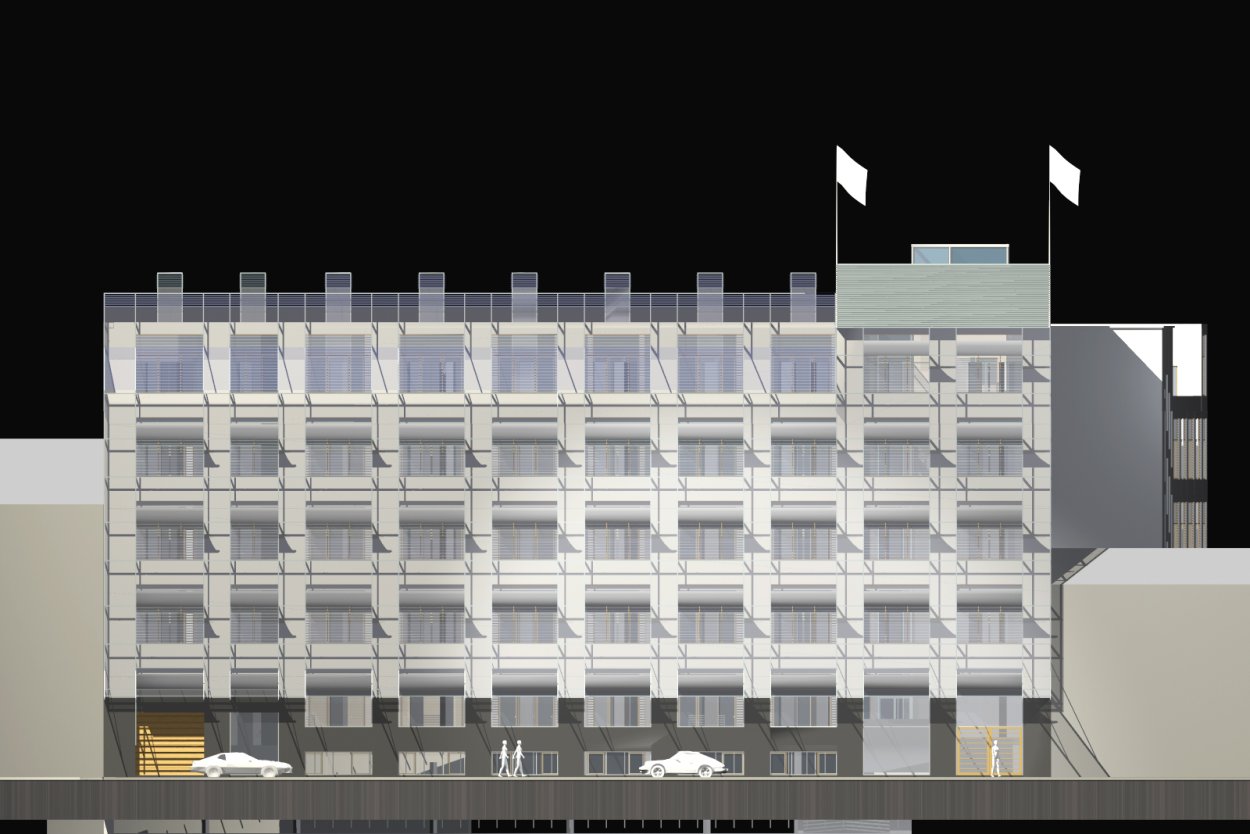 Transformation of a multi-story factory into an office building

The program of the competition demands the renovation of an office building, with the purpose to welcome different construction companies.

The building to be renovated is composed of five usable levels and unfolds into two large wings around a spacious courtyard in the back. The main wing faces a busy avenue. The positive characteristics of the existing building are the intermingling of the two wings, generating a large space protected from pollution, high ceilings, ideal for the thermic and lighting comfort, and the concrete structure that confers a great thermic inertia to the construction.

The purpose of the project is the creation of a lifestyle that favors communication and efficient groupwork in a building which is energyefficient and respectful of its environment. The concern to conceive a building easy for maintenance and unexpensive to operate is added to the objectives.

The part of the studies concerning the building physics, made in collaboration with the Belgian Building Research Institute (BBRI), has lead to the following arrangement, to optimise the comfort of the employees and the energy efficiency.

In order to create a peaceful place in the centre of the city, the parkinglots (organised in split-levels and situated in the back of the yard) are covered by a wooden terrace. Inside the building, the numerous level differences at groundlevel are removed by the creation of large stairs and a slope for disabled people, leading to the elevators. On the other levels, the structure of the building suggests an internal division in three transversal bays of approximately 5 m each. The office partitions are made out of opal and clear glass and flexible modular furniture in function of the needs.

The configuration of the fourth floor lends itself to landscape offices, including multiple conference rooms. The roof is converted into an accessible terrace.

The façades need to be sober, without artefacts, and express the ecologic and humanist care in the most discrete way possible. Their characteristic elements are the double skin and the solar reflectors, increasing together the thermic, acoustic and light performances of the building. Besides its essential part in the thermic control, the double skin creates an acoustic barrier, efficient against the noises of the avenue that fronts the building, and offers protection from traffic pollution.

Optimal workcomfort during the year is reached without aid from any active airconditionning. The minimized solar gains, the favorised natural lighting, the important thermic mass and the resort to nightcooling, avoid the need for mechanical production of cold. In order to limit direct solargain, the windows are equipped with exterior solar protections, placed in the double skin.

In order to limit the thermic gains due to the artificial lighting and its resulting energy consumption, the daylighting is optimised by the use of ‘light shelves’ developed by Raphael Compagnon at the Federal Polytechnic School of Lausanne (CH).

In order to increase the visual comfort and imitation of  energy consumption, low luminescent lamps with electronic balasts and light sensors are integrated in the light shelves. This indirect lighting system limits the glare and the reflections on the computerscreens. A direct illumination reinforces the light on the workdesks.

The structure is kept visible to increase the thermic inertia and to minimise the variation in temperature in the building.

The ventilation is achieved in three ways: