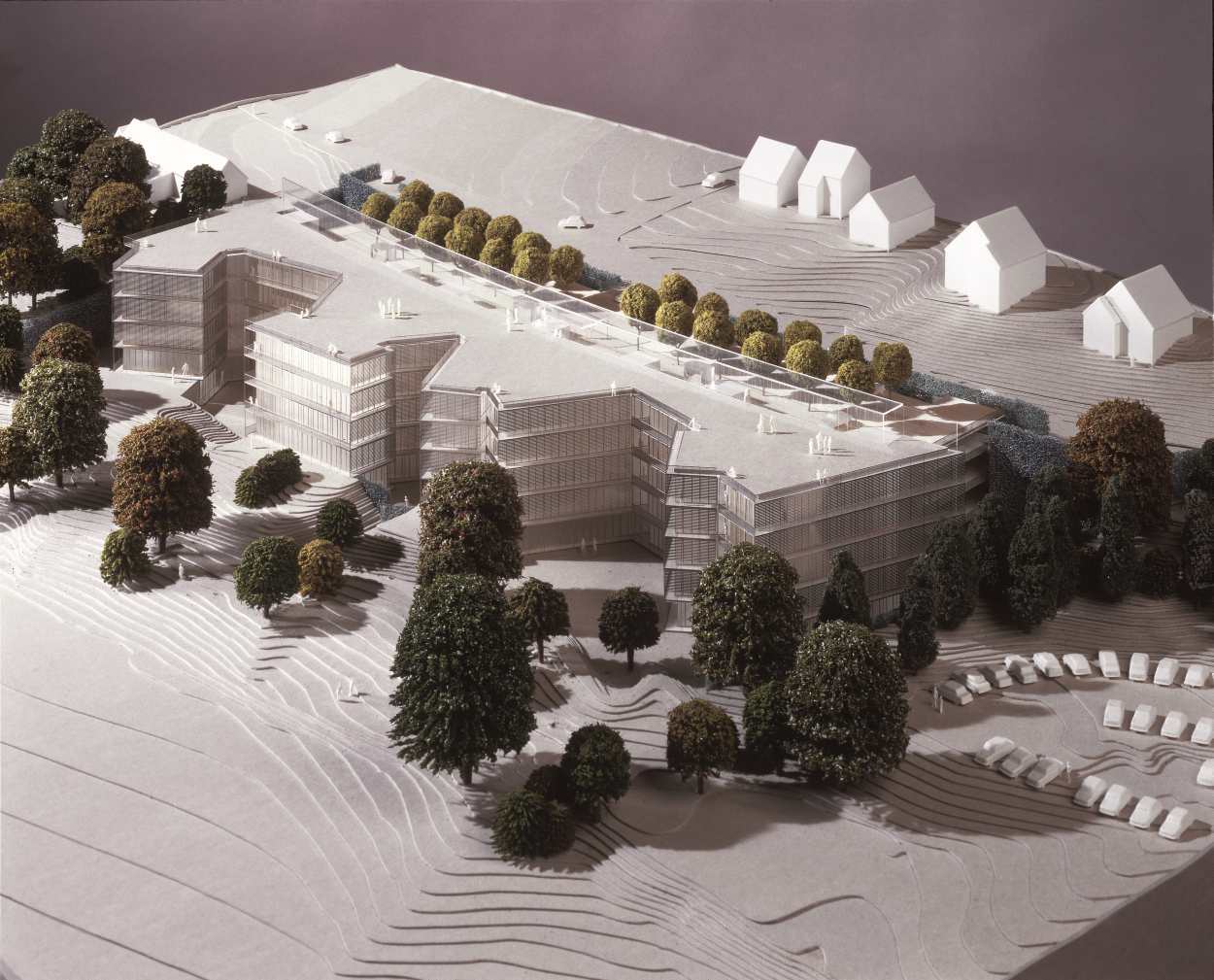 The site of the new headquarters is characterized by a 8m transversal declivity, and comprises a vast non-buildable ecological park. It is bordered to the north by a small but busy access road. The area overlooking it is residential, with neighbouring houses two storeys high in average.

The building is intended to host 250 people in individual offices. Its use as general headquarters implies the flexible organization of services and functions of various sizes and importance.

The main entrance from the street is on the central axis of the building’s north facade. It is accessible from a wood-surfaced esplanade covering the 16 m wide parking lot stretching three to four storeys below street level. It is surrounded by high hedges and planted with 4 rows of 6 large trees. A 3,6 m wide strip hosting the two sets of superimposed parking access ramps is set between the street and the esplanade. On the other side of the parking lot, a 3,6 m wide void, glazed on both sides, distributes natural light to the lower levels of the buildings and hosts the vertical circulation and the sanitary cores. To the south of this elongated lightwell, a 22 m to 29 m wide strip of office spaces faces the green area.

The declivity of the land allows the erection of four storeys under street level and one storey above, resulting into a five storeys high facade on the south side.

The ratio between the length of the site and the façade perimeter necessary to provide daylight, views and natural ventilation to a maximum of offices and circulation spaces implies the use of an accordion shape. This configuration allows the accommodation of many possible variations of the programme, and makes possible the organization of workteams of variable size hierarchized in a flexible manner around semi-public lobbies. The number of offices directly accessible from the main circulation is limited. They are dedicated to meeting rooms, waiting rooms or reception rooms.

On each office floor, the public circulation space borders the north interior glazed facade. It is flanked on the south by the semi-public area – a succession of triangular or polygonal spaces that can host occasional workstations, coffee corners, copy or communication equipment – and the semi-private spaces. With access to windows in the south facade, both public and semi-public spaces are lit and ventilated naturally.

The semi-public area gives access to the semi-private and private offices. The semi-private spaces accommodate meeting rooms, reception rooms, as well as maintenance rooms. Few in number, they are the only ones lit by secondary daylight and requiring mechanical ventilation. The private spaces all enjoy direct daylight and a view onto the landscape. A 90 cm modulation allows to divide the rectangular office spaces into individual or collective rooms of variable width and surfaces.

An outer catwalk borders the south, east and west facades of the building on each floor. It allows for a continuous array of doors, glazed from floor to ceiling, to provide a maximal enjoyment of the landscape as well as a maximal use of the natural light.

Aluminium solar blinds are placed on the outer side of the catwalks to reduce the solar factor and to reflect natural light inside the building.

The south facade is organized in 3 crescents of variable size delimiting the west and east gardens as well as a courtyard in the centre. A path waving through the green area gives access from the courtyard to an existing trail.

The particular configuration of the offices and their south facade, avoiding any preset architectural hierarchies, is the expression of a form of organization and is not to be mistaken for a formally chosen organic shape. Broken down to the scale of the site, it refrains from carrying any monumental arrogance towards the southside landscape.

The organisation of the building also forms part of a strategy aiming at keeping the energy consumption of the building as low as possible in an economically achievable manner. Natural lighting and ventilation, free cooling, the use of a modular air-conditioning system only for the climatic peaks, and the use of low energy-balance construction materials all contribute to this strategy. An accessible planted area also covers the roof of the building, providing excellent thermal insulation, minimizing the solar factor, and keeping the roof structure from thermal shocks. It contributes to the sought-after gentleness of the whole.