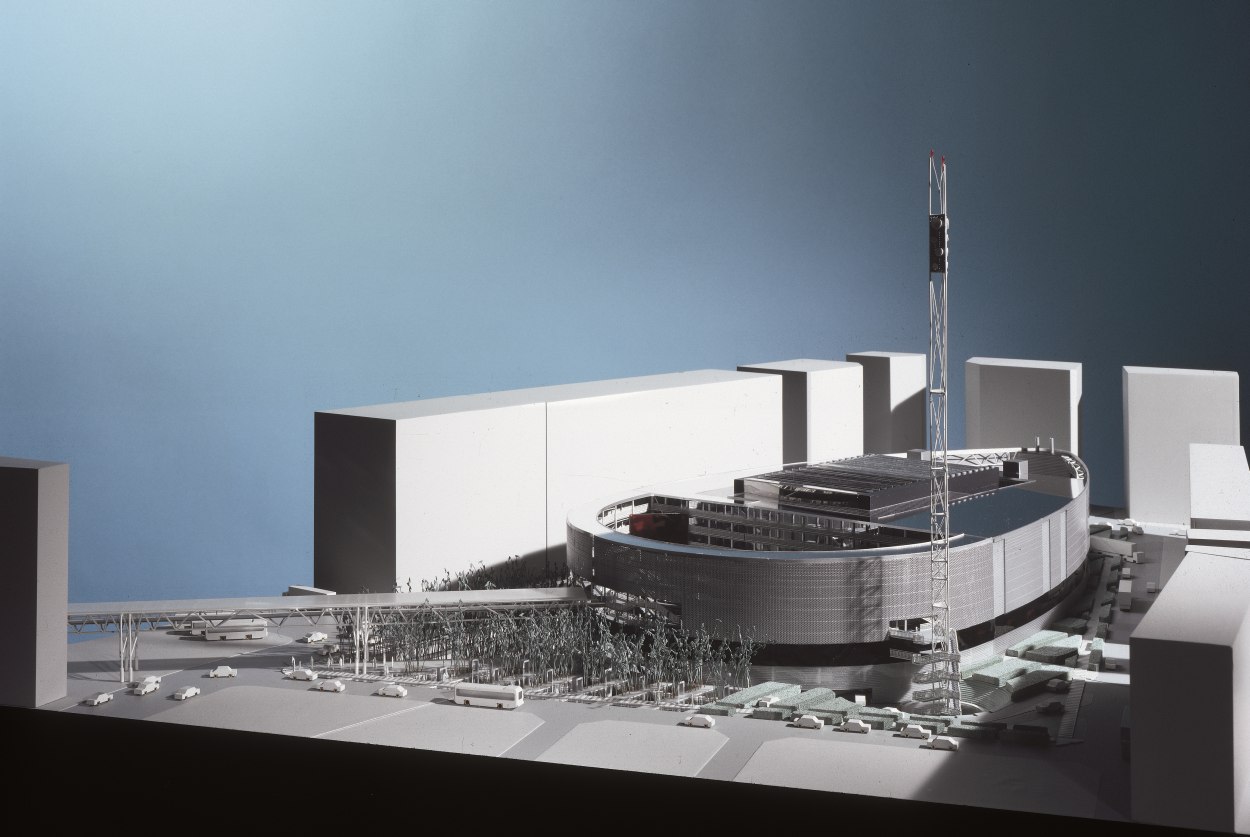 This bold design is marked by a fixed perimeter defining a space suitable for evolving uses, a concept for the future.

The building plan is based on a series of north to south strata which form a progression from public and theatre space to private and technical spaces.

The first stratum from the North (bottom of plan beside) creates an urban park, with ponds, gravel and bamboo landscaping, that is diagonally crossed by the mainground-level pedestrian access. The spiral access to the parking space is bathed in natural light as a consequence of its open core containing the staircase and communication tower for the building.

A semicircular multipurpose plaza, surrounded by exterior galleries within the perimeter of a perforated wall, acts as a transitional buffer between the busy urban life beyond and the serene atmosphere inside. The multipurpose plaza, like a Shakespearean theatre, may be used for outdoor performances and be covered by a velum like a Roman coliseum. A sundial is drawn on its floor while semicircular galleries and staircases lead from the ground entrance and pedestrian deck to the building entrance. The suspended galleries above the entrance shared by each of the building’s three halls provide emergency escape facilities on their lateral sides.

The second stratum is composed of a common lobby above which are grouped three halls which contains the building’s three auditorium. The two lateral halls are topped by rehearsal rooms. Between these lateral halls and the central main hall are two atria providing natural light to the main hall. The three halls are primarily functional with a technological ambience. The use of black and grey colours enhances stage-set colours and focuses the spectator’s attention on the stage. Because spectators often spend quite a long time in a closed auditorium without any performance on stage, the roof and lateral walls of the main auditorium contain a number of clear panels to let natural light enter the space, thus creating a continuity with the outside world during such time. Specially designed shutters darken the auditoriums during performances, and sound deflectors monitor the acoustics.

The third stratum accommodates performers and crew, and includes the main hall stages and technical facilities. Above the main hall are dressing rooms and administrative offices served by a separate entrance. The foregoing facilities are isolated from noisy urban surroundings and open into a quiet roof-top garden surrounding the fly tower. Generally, the space for performers and staff is separate from public space. However, there are limited meeting points including two glazed rehearsal rooms that are surrounded by public galleries and directly accessible by the actors from dressing rooms located on the same level.

The fourth, and last stratum is a security area with an enclosed truck-unloading zone and technical rooms at the building’s South end. The building provides for the possibility of alternative future uses by having extra space available under the roof and at its South end. The exterior façade that surrounds the building is sober. Marked with a large open entry connecting the urban park with the plaza, it is composed of louvered technical panels on its lower part and supports for a continuous communication device on it main upper part. This device can take the form of a rear-projection screen, billboards, electric bubbles, or micro TV monitors announcing performances or showing an actual performance, establishing a kinetic link between the city and the building.