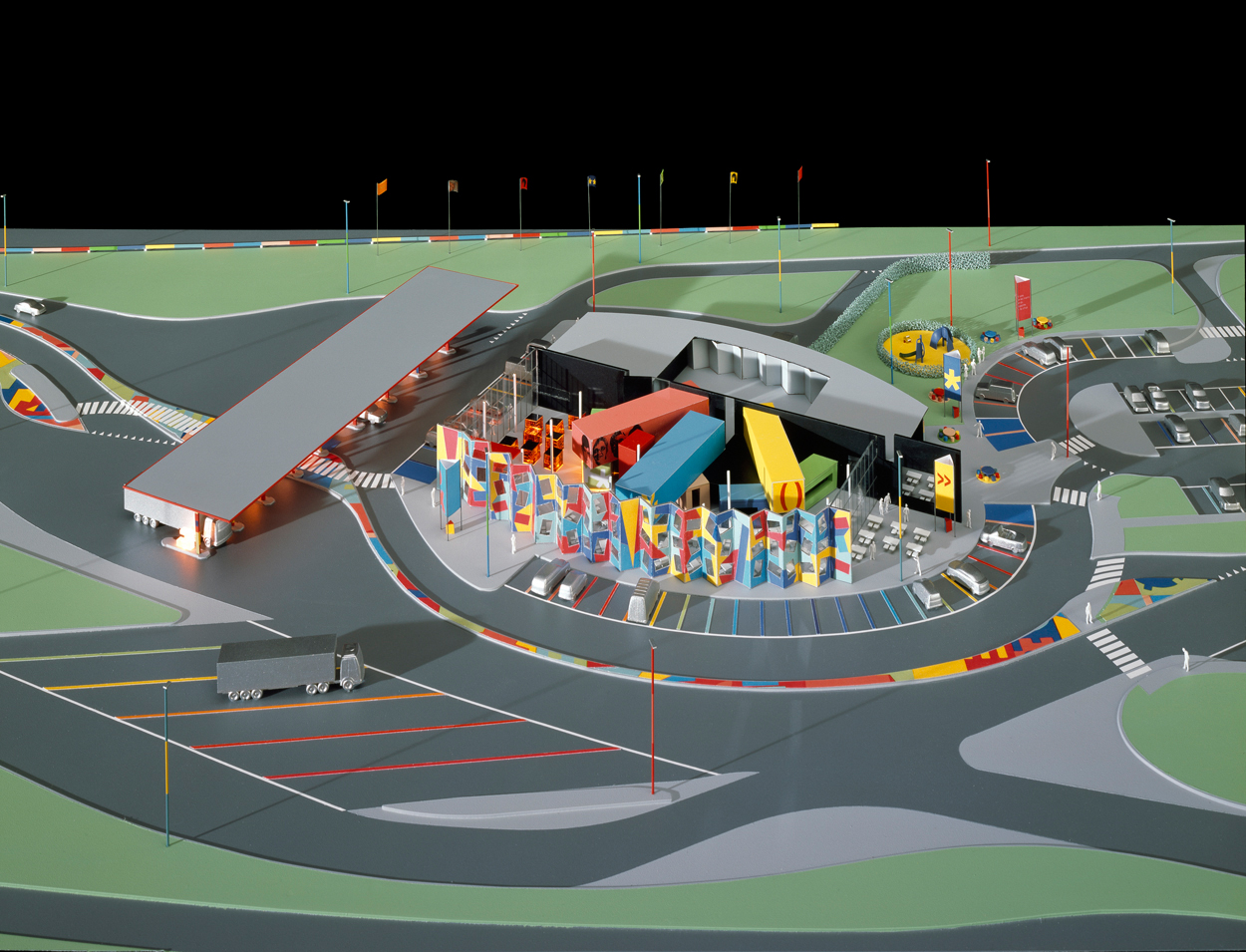 If we aren’t careful, service stations will soon resemble abandoned factories, or forgotten border posts. We won’t stop to fill up on petrol as it—too expensive and ever more expensive—will have been replaced by other fuels that we will fill up on at home by a simple electrical connection, through solar panels, or using compressed gas—what do we really know as to what the future will bring?

We will soon, through redundacy, find alternative uses for these service stations : those that survive through the sale of other products than petrol will undergo rapid conversion, otherwise grass and weeds will quickly erase them ; children will no longer play at counting these ghostly buildings with unlit signs as milestones along the road to vacation destinations.

The service stations that we will continue to visit will be those that have disdained their only logical function in order to transform themselves, distinguishing themselves not only through their architecture, their colors, the originality of their commercial proposition, which is already no more than a pit stop between two destinations, but also as an unforgettable place where one wants to stop and linger.

This thinking has guided the conceptual planning of the service station at Saint-Ghislain. Abandoning cookie-cutter architecture, a random imposition of a tired palette of colors, the systematic use of the same materials and ever-present banality, this project favors a creative and innovative approach as guiding principle : welcoming the collaboration of painters, sculptors, and musicians to the studio of the architect to arrive at a collective result where color, graphics, and sound point the way to the discovery of new manner to envisage the purpose and aspect of a service station.

Joint work by Jean-François Octave, Léon Wuidar, and François Huon, all three visual artists, and of Laurence Jacquemin, musician and sound environment creator, under the guidance of Philippe Samyn surpasses simple decoration of a fixed construction.

It is not about flinging color onto walls and floors, or retouching the decor by dazzling the user. On the contrary, it is essential to redefine the position and the role of the visitor, who is no longer only seen as a « client » but rather as a guest in an interactive and playful environment that is centered around him, whether he is only making a brief stop or he is a regular visitor : the colors attract him, the graphic signage guides and pleases him, the sound environment welcomes him, and the form of the building surrounds and reassures him.

Nothing is ignored or left to chance within the team working on this project : the interior of the service station, the shop, the restaurant, the showers and WCs, the parking areas, the lighting and the refuse containers, each element has been carefully studied and designed to harmonize and contribute to the overall perception of the space.

The work of the three visual artists with the architect—gathered together here for the first time—is not the fruit of personal artistic initiatives or opinions, but rather of complementarity in the expression of a new vision robust enough to be judged in the future.

It is not sufficient to distinguish this service station from all the others that dot the highways of the country, but rather to initiate imitation and innovation in the context of other projects : situated near Mons—the future European Capital of Culture in 2015, the Museum of Contemporary Art at Grand-Hornu, and the former border station of Hensies where Jacques Moeschal’s monumental sculpture will soon be restored and installed at a renovated site, this service station participates in the cultural reawakening that will give Wallonia a new and welcoming image.